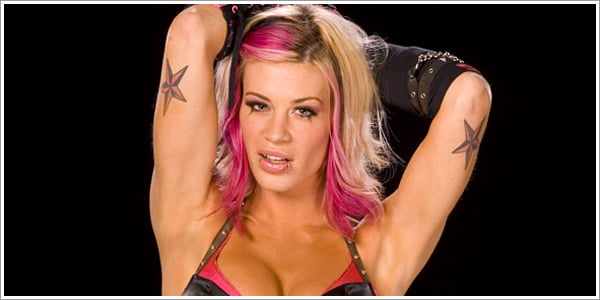 HOLY F**K! If you’re looking for something to give you your weekend “lolz”, here’s something! Rolling Stone magazine has connected WWE Diva, Ashley to a high-class hooker service in Los Angeles! Mwuahaha, gives new meaning to the term “Dirty Diva”, huh?! PWInsider.com’s report below:

Thanks to Jay Gunn for the following. … I’m reading the newest issue of Rolling Stone (with “The Hills” girls on the cover – what has this rag come to?), and there’s an article about a high-end escort service in L.A. operated by a woman named “Nici” that setup women like Maxim and FHM models, porn stars, and Playboy Playmates with rich clients who would pay up to $25,000 a night. Of course, she was busted by the FBI, and the Rolling Stone article lists the names of several of Nici’s escorts, one of whom is WWE Diva Ashley Massaro. It’s an interesting article and worth seeking out.

Mike Johnson had a chance to check out the issue, and Ashley is indeed mentioned, with a photo, as a WWE star and Playboy cover girl who was amongst a number of Los Angeles based women attached to the escort service. We should point out that there was no implication that she ever had sex for money, just that she was among the celebrity-type women the service took a fee for in return for setting up meetings with their clientele.

LMFAO! It actually sheds some new light, Ashley’s idea of “wrestling training” includes a bed rather than a four-sided ring. Oh gosh, there’s just so many routes I can explore with this one… Needless to say, unless a Diva dies (God forbid) this has to be the top Diva news story of 2008! For fans not of the Ashley persuasion (99% of the Internet wrestling community) this is bound to leave a pretty big grin of our faces regardless of whether it’s true or not. And what’s that? Oh right… the sound of stampeding marks running to Ashley’s defence. We can’t wait to hear the excuses!

There are so many questions; how will Ashley respond? (Incoherently, perhaps). Will WWE stand by it’s gal? Or release her? Does WWE even have a policy/stance on hiring and firing escorts? My gut feeling tells me this is gonna be a big story over the next few days! One thing is for certain, this is gonna be all over TMZ like a hot flash!