Only Day One and Torrie’s Got Her First Feud! 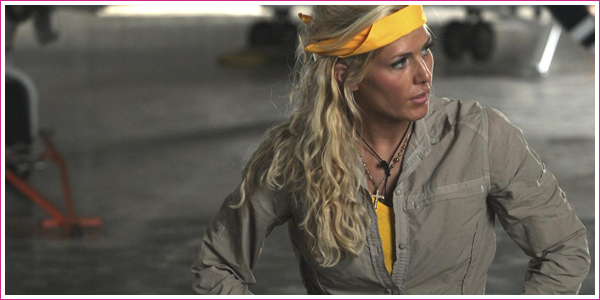 If “I’m a Celebrity… Get Me Out of Here!” was written and produced by the WWE, they’d be booking Spencer & Heidi – or Speidi as they’re known – against one of our beloved ex-Divas, Torrie Wilson. Last night on the series premiere of “Celebrity”, Torrie added her first celebrity rivals to the long list that includes Victoria, Candice, Sable, Dawn Marie and more, in the pampered, rich white trash Hills stars.

Within half an hour of the two hour premiere, Speidi had quit the show not once – but twice. On the second occasion, the other celebrities had started rationing out the newlyweds’ goods including a bottle of shampoo that Torrie laid claim to. Torrie and Frangela (who are so fierce by the way) joked around with the shampoo bottle, Torrie said: “Do you like my new Torrie Wilson shampoo?”

However soon after, Speidi returned to the jungle and caught on to what was happening and an enraged Spencer Pratt (perfect last name!) made a bee-line for our Torrie. Spencer hurled abuse at Torrie, reinforcing the wrestling stereotype that all wrestlers take steroids, saying: “All you know how to sell is steroids.” He accused of her achieving her physique using the enhancing drugs, saying there’s no way she could look like that without using. An angry Torrie fought back, “I don’t take steroids. Have you ever worked out?” She then quipped, “Maybe you need to take steroids”, suggesting he chill out.

Speidi continued to trash talk Torrie in the privacy of their own hammock, Spencer called her a ‘bitch’ while Heidi said ‘she’s been so mean to me’. Spencer later hid Torrie’s backpack in the jungle but returned it with a fake apology.

It’s only day one of the show, but Torrie has made a couple of enemies already! Could it be that Speidi are simply jealous that Heidi looks like a monster-truck compared to Torrie? Either way, I was screaming at my screen for Torrie to knock Spencer the fuck out. She’s too passive for her own good!

EDIT: Extra bonus footage from the jungle! I love Torrie… I love Janice Dickinson… I love this video!!!