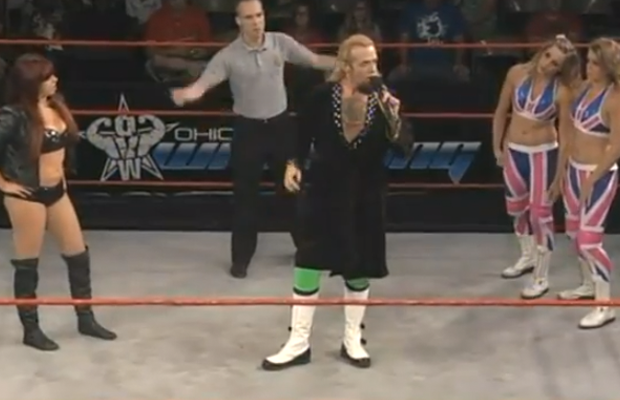 We’ve got a short OVW Write-Up this week, as the ladies of OVW never actually saw in-ring action. What did happen was strange and kind of creepy, so proceed with caution.

Watch the segment below:

Taeler Hendrix comes to the ring, followed by Hannah and Holly Blossom, who are described as “sugar, spice and everything nice”. Hm.. that’s quite a contrast to another pair of wrestling twins we know. The Blossoms don’t seem to have any residual tension left over from their spat during last week’s Battle Royal.

Taeler takes the mic and asks which of the two she’s going to wrestle. Apparently management didn’t see fit to tell her who her opponent was going to be.

Oh, maybe I spoke too soon with the whole “no tension” thing, because Hannah and Holly are arguing over who gets to wrestle. Taeler hands over a Sharpie; she wants the twin she’s wrestling to mark herself so she can tell them apart. No “twin magic” for her!

Suddenly, a guy with a strange accent speaks over them, asking what these “broads” are doing in his ring. The man – apparently called The Bodyguy – is making his debut, unfortunately right before a scheduled match. Piss poor timing, Bodyguy.

Apparently, Bodyguy – who looks like The Dude if he had a drug problem – wants to striptease for the fans, but suddenly that masked man from last week comes to the ring and puts us him out of his misery.

Thoughts: Well, that was disappointing. Why tease us with a match, just to set up some mediocre debut? Couldn’t this have been its own segment? Blah.

I don’t know what else to say about this episode, other than that I’m surprised OVW didn’t continue to push Lei’D Tapa. She’s on a hot streak and the fans love her, so it makes no sense to stick her on a dark match. I guess they figured if she had her match interrupted by rhinestone robe guy, she would have kicked his ass herself, leaving nothing for that masked man.

Do better next week, OVW! I know you’ve got it in you. Just, you know, don’t do this again.