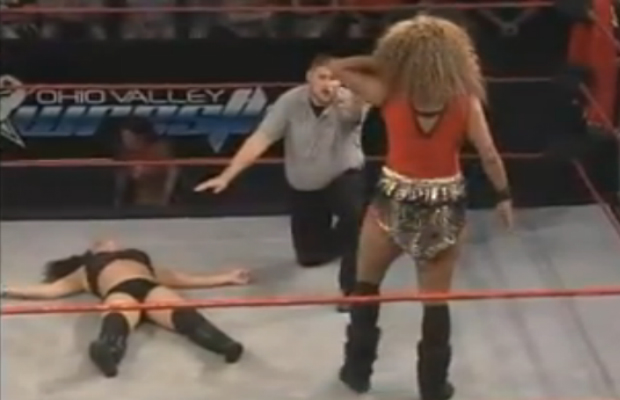 Hola there everyone, and welcome to this weeks OVW Write-Up. We had another week of absolutely nothingness, which we’ll try to forget ever happened, like that last time we went through a dry spell. Never fear though, because the ladies of Ohio Valley are back with a vengeance.

And speaking of being back, none other than TNA Knockout, ODB makes her grand return to the place where many fans, including this one, first learned of her wrestling existence. She’ll take to the microphone to let us know what she has in mind for her appearance tonight, but with appearances also being made throughout the show by Lei’D Tapa, Taeler Hendrix, newcomer Envy, and Women’s Champion, Trina, will any of them be during ODB’s big moment?

Scroll on down to find out…

Can it be? Why yes it can. The ODB is back to her roots tonight as she makes her way down to the OVW ring and lets a commentator slap her ass. ODB looks extremely fan friendly this evening, making her way around the entire ring and receiving a microphone. She takes a sip from her flask and runs down some of the memories from her time at OVW, including being champion, Rio De Janero, and getting arrested. She then talks about the huge group of women they had back then such as Beth Phoenix, Serena, Katie Lea, Alicia Fox, and Kelly Kelly! She’s now married and tatted up a bit more, but the main reason she’s come back to OVW is to see what the women are made of now.

ODB calls anyone out from the back and here comes none other than the Fall Out Boy themed Women’s Champion, Trina! ODB asks her name, and Trina lets her know that she’s the toughest Diva here. This doesn’t set well with Lei’D Tapa, who steps out as well and makes her own presence felt to the two women. ODB amusingly tells Tapa now to eat her, but Lei’D steals the microphone and bops ODB on the head. She turns her focus to Trina and says that even if she holds the title, she’ll never be as big and powerful as Lei’D. ODB takes the microphone back and motions for a triple threat match to begin. The referee runs out and we’ve got a match underway after the break!

We’re back and underway as Tapa shoves Trina from the start. ODB now begins unleashing on Lei’D Tapa with some shots and runs forward with a splash. Trina hits a punch, but ODB chest bumps her and she tumbles a bit, but gets back up only to be slammed down.

ODB with a headlock, as Trina backs her into a corner and slams her head into the abs. Trina then nails a clothesline, but Lei’D Tapa breaks the pin up. Tapa with a pair of slaps and a double clothesline, slamming ODB’s face down and locking in a submission as Trina stays down on the other side of the ring. She grabs ODB’s flask and drops it to the outside, leveling ODB with a set of kicks and a foot choke in the corner.

Tapa hits a bodyslam and scratches ODB’s back, before decking Trina and taking her away. She sends ODB flying but misses an attack as ODB rolls through. ODB goes for the fallaway slam, but Tapa falls on her! Trina breaks a pin up and locks a choke hold on Lei’D, but Tapa stands up and slams the champion down.

ODB now goes for Tapa and the two of them Irish Whip her into the ropes. They duck a clothesline attempt and work together to take Tapa down! Trina now rolls ODB up out of nowhere, but ODB kicks out and hits the fallaway slam on Trina. She kips up and goes for a running attack, however Trina grabs the ropes and sends ODB flying. She then turns right around into a huge superkick by Lei’D Tapa, who picks up the win over the Women’s Champion.

And so that you were kept guessing if anyone else would appear of the aforementioned list, I’ve decided to include the following segment after those that appear above. Enjoy!

We spot two leggy women walking down a hallway, and they are none other than Taeler Hendrix and Nik… Envy. I’m not sure if we need to file a missing persons report of Nikki St. John or not, but let’s give her a few more weeks to appear before doing so.

The two banter a bit about what color is supposed to go on their nails when it comes to Wednesdays, before ultimately opening the bathroom door on a clothes changing Jessie Godderz. Tara certainly won’t be happy about that, but it seems she has nothing to worry about because the duo call him a loser and say he can’t get with them unless he becomes a winner.

Thoughts: Well, to focus on the bright spots first. I enjoyed having ODB back. I especially loved her promo as I was a monster OVW fan back in the days of the division she named off. Another positive is that I enjoyed what they were going for in having ODB challenge the toughest woman from the back, and then bringing out the champion and the dominant monster who has been on a rampage since debuting.

The negatives though, would pretty much have to be most of the match. Triple threats rarely come off well that I can recall, and I don’t think this showed Trina or Lei’D Tapa in their finest moment. I did find ODB to be well though and you could tell she was definitely the strongest of the three performance wise, but a lot of moments just seemed off to me in timing, or like they weren’t sure what to do next. Hopefully being that this is treated as a developmental program of sorts, Tapa in particular can get help from trainers if she’s being groomed to join TNA’s rather small division. Either way, not the best match for me, but it was great to see ODB return to the first place I became familiar with her and reminisce on some of the memorable events she had partaken in.

I could go on about how I’m disappointed that Taeler and Heidi‘s storyline has pretty much been dropped, but to be honest I’m not really affected since it hadn’t really taken off as I’d hoped. And of course, I’m mourning the fact that my heart and soul, Saint Epiphany is no longer an active wrestler. At least she left with a memorable and hilarious segment!