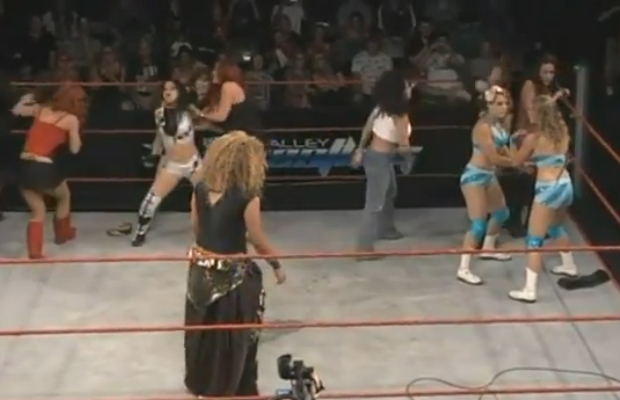 What’s up all you Superstars and femme fatales? It’s time for another OVW Write-Up to be notched into our belt of recaps, and if last week is anything to go by, we’re in for a Lei’D Tapa filled festival. This time last go around, we saw ODB return home to OVW and issue a challenge for the toughest woman to face her in a match. Not only did her invitation bring out the Tongan warrior, but also the Women’s Champion, Trina, who ended up falling victim to the Tongan Tour of Terror’s monstrous streak. This week though, we’re not having any sort of match… but we ARE getting to see quite a lot of the females on the OVW scene. Rather than spoil it and ruin the surprise (and since I’m watching it for the first time as I recap), let’s jump in spoiler-free and see who all turns up.

… Okay I lied. We’ll check it out in a second, *prepares my Julie Chen voice* but first, let’s take a gander at a backstage segment involving Taeler Hendrix, Envy and those sugary Blossom Twins, Hannah and Holly:

After taking a few moments to rethink why I just called the Blossom Twins sugary, we press play and see the twosome warming up backstage and discussing how they need to go after Trina’s championship. I really hate to do this, but Blossom A heads off as Blossom B is then interrupted by Taeler Hendrix and Envy (Seriously, can we file that missing persons report on Nikki St. John?). The two don’t seem fond of Blossom B’s gear, as I find out Envy has quite the Australian accent on her hands which is my weakness and thus she’s skyrocketing up my list without having seen a match yet. Taeler offers Blossom B the chance to split from Blossom A (insert your gasps here), and join the two of them so they can fix her up! Following a rather impressive high-five combo, they exit stage right as Blossom B doesn’t seem too enthralled with the idea.

The Mean Girls make their way out to the ring looking rather similar, which I guess is good for a team to resemble. The crowd doesn’t take too fondly to them, but Taeler doesn’t care because she’s too upset that the Women’s Title is lacking the necessary bling it needs. She wants to be in the next Saturday Night Special facing Trina, but speaking of which… here she comes to the roar of both the fans and myself because I never get tired of that theme song. Taeler mocks Trina’s muscular build and ableness to hear well, as Trina accepts the challenge to face her because the only time she’s lost to the evil redhead is by cheating. Hendrix isn’t having any of it, and targets Trina by saying she needs to eat a sandwich which amuses me (in a good way) because Taeler is the smaller built of the two. Suddenly, they’re cut off by Heidi Lovelace, who looks great and asks for Trina’s microphone. Heidi lets Taeler know that she’s no longer falling for any of her tricks, before reminding her that she pinned Hendrix at the last Saturday Night Special with a kiss. Oh, make that kiss of death.

Australian Envy feels that we all know just how much Heidi would love to “pin” Taeler again, but it’s not her chance for the title — it’s Taelers. They start to get into it, but a thousand angels begin to surround the OVW ring and burst out in “Honky Tonk Badonkadonk”, bringing out our seldom seen country cowgirl, Jessie Belle. (Side Note: Aside from Australian accents, southern is the next one to do it for me and while I don’t know if Jessie Belle’s is real, it’s good enough for me so welcome up the ranks of my favorites list.) She claims she never got her rematch against Epiphany when she lost to the saint, but to quote Ke(dollar sign)ha, blah blah blah… nobody cares, chimes Taeler.

Some rock music hits as… what?! Nikki St. John has suddenly been found and Taeler seems to still recognize her which is a good sign. Nikki and her rocking secretary glasses claim she knows exactly how Taeler operates and what Heidi is really after. Trina then takes the microphone and says she can take them all on one by one, but then… YES! I’m now having flashbacks to World of Hurt where I first fell in love with the perfection known as Lylah Lodge! The queen of lodge podge wrestling asks Trina if she knows who she is, and as far as I’m concerned, the champion had better. Lylah Lodge feels that she deserves a title shot because she’s a princess, and I couldn’t agree more. Taeler then proceeds to insult the princess’s choice in lingerie styled gear, but because I love Taeler so much I’ll let that slide. And also because the Blossom Twins are out next and my attention is now fully on the blue clad pairing. Blossom A cites their lengthy stay in OVW compared to everyone else as to why they should hold it, but Blossom B wants to hold it herself! Nooo, I can’t take Blossom Twin tension.

Taeler takes the shoes off, but Trina tells them all to shut up because she’s over it. All hell breaks loose, but out comes the final contender in Lei’D Tapa! The Blossoms go after her but she takes both down, followed up by the mean girls and then Nikki St. John! Jessie Belle gets a headbutt, as Heidi Lovelace is dropped hard! Trina takes Lylah Lodge down, before turning around into a superkick — shades of last week — as Lei’D Tapa stands over the fallen champion and proclaims she is here to dominate. This is her ring and every female will both respect and bow to her! She finishes the segment off with her war cry, as everyone else seems to now be missing as opposed to just Nikki St. John.

Thoughts: Excellent! I thought this in ring segment was built to perfection, and it gave every female some screen time which was even better. The roster is so stacked that we don’t always get to see a lot from a few of the roster members, so it was nice to get the opportunity from the likes of Lylah and Jessie Belle. I loved how everyone had their own reason as to why they should be champion, and they even tied the Blossom Twins’ into the backstage segment where it looks like they may be starting to unfold as a team. Lei’D Tapa standing tall was exactly what should happen given her obvious unique stature and look to everyone else, but I’m not sure I want to see her face off against Trina one on one. I think a battle royal would be a lot more fun, even if it would just come down to the two of them anyways. I like seeing everyone OVW has to offer, and hopefully this segment is used to set up a match featuring everyone as opposed to just using it to further Tapa and Trina as a solo showing. No matter what though, tonight was a strong night for the division in my opinion, even if there wasn’t a match. I was entertained for the whole segment (which got more time than any match I’ve recapped for them I believe), and there’s not much more I can ask for overall.