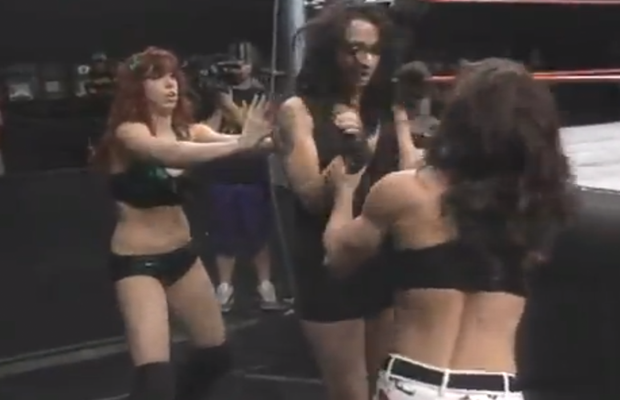 What’s up everyone? Welcome to this week’s OVW Write-Up, where we scout the (kind of, maybe, if we’re lucky, but we can still hope) potential upcoming TNA Wrestlers and Knockouts. This week, we’ve got not one, but TWO… backstage segments. AND not one, but TWO matches. Yes, we’ve got a lot to talk about this week and it all involves a plethora of women. Lei’D Tapa makes her OVW TV debut facing off against Jessie Belle, plus makes her presence felt in a segment later on with my personal favorite, Saint Epiphany. Not only that, Taeler Hendrix and Heidi Lovelace are back with another segment as they prepare for Taeler’s match against Women’s Champion, Trina to also take place tonight as well.

… If that wasn’t a mouthful to try and coherently type, I don’t know what is so let’s get things started with the Tongan Warrior and the Country Darlin’. (Yes I can’t believe I just said darlin’ either.)

We get to kick things off in the land of the femme fatales with some faces we’ve yet to experience since this write-up kicked into high gear a few weeks ago, and up first is a country cowgirl by the name of Jessie Belle. She looks fun, has a bit of the Daffney splits in her, and enters to Honky Tonk Badonkadonk, which I could soon see becoming a fixture on my android right in line with the likes of Jason Aldean and The Band Perry after witnessing this entrance. Jessie skips, dances, and hops around the ring as she awaits her competition in the form of the Tongan Terror, Lei’D Tapa. She seems to have her own personal entrance theme that consists of drum beats and a voiceover where she introduces herself and proclaims she’s here to dominate.

Lei’D steps into the ring with her intriguing red cape, letting out her signature shriek before eyeing down her country competition. Jessie looks ready to go, but Lei’D scores a kick right off the bat. She slams Jessie onto the ropes and sends her into the corner, but Jessie gets an elbow up and goes for a headscissors out of the corner… but Tapa holds on and hoists her up in air! She decks Jessie Belle with a huge powerbomb and stalks her prey a bit, but Jessie doesn’t give up. The crowd tries to chant Jessie on, but Lei’D Tapa applies the Tongan Death Grip! Jessie fights out a little, however that doesn’t stop Tapa from hitting a huge headbutt that sends Jessie rebounding off the ropes right into a TKO type Stunner move for the impressive victory.

We fade backstage to the sight of my OVW saint, Epiphany, in the midst of a massage by the one and only Eddie Diamond. Saint Epiphany claims the rub down feels gooood, as Diamond says he’s going to take her on a journey later tonight. She asks where to, but his attention fades off on making sure a check list is complete. Suddenly, Lei’D Tapa walks into the room and seems to completely take Eddie off his game. Epiphany, judging by her “Baby you stop?” dilemma when Diamond’s hands no longer continue movement on her shoulders, has no idea what’s going on. But we, the faithful OVW following, can see there’s a little something going on in his mind when it comes to the Tongan Warrior. He tries to save face by saying he got distracted thinking about all the things the two of them will be partaking in this evening, but his face tells a different story. Could Epiphany’s man have eyes for another intimidating woman?

Backstage we go once again to the sight of Teidi… Haelor… Lovedrix… well how about I let you all come up with your favorite team name in the comments and I’ll begin using the winning choice next week. Anyways, Taeler is prepping (and by that I mean freaking out) over her match against Trina later due to the champ’s unbeaten status, as Heidi tries to calm her down and brush her hair. Taeler’s worry increases by the fact that her cohort, Nikki St. John, is nowhere to be found… but Heidi’s top concern is why Taeler seems to be getting so close with Nikki compared to her. Taeler tries to paint it as Nikki being just a friend who cares about her because everyone wants to be her friend. Just to make Taeler feel better about things, Heidi volunteers to accompany her to the ring tonight in order to make up for Nikki… and then, she looks to be attempting to lay one on the lips of Taeler, but Hendrix frantically leaves just before they make contact. She grabs Heidi to come with her, leaving Heidi feeling somewhat disappointed, yet hiding it to keep Taeler happy.

Out to the ring comes a nervous Taeler and a reassuring Heidi. As they pose on the ring apron, Heidi again attempts a lip lock, but Taeler turns her attention elsewhere and they opt to hold hands instead. Lovelace applauds Hendrix during her entrance and gives her a last minute pep talk as the sound of angels (aka Fall Out Boy) begins to grace my eardrums. Trina scurries into the ring as we get underway with Hendrix trying to plead for Trina’s forgiveness. Meanwhile, Trina scolds Taeler as she’s sick of Hendrix trying to pit she and Heidi against each other. Hendrix offers a handshake, but what we see that Trina doesn’t is that Taeler has her fingers crossed behind her back in a sign of either stating she doesn’t mean it, or prepping to one day be arrested. We’ll assume it’s not the latter though, as Taeler’s behavior to Heidi, while upsetting, is not bounds of arrest.

Trina clotheslines Taeler and continues to ambush her multiple times, scooping her up with a bodyslam and shoving her face first to the canvas. Hendrix, still in her ring jacket mind you, is being dismantled, much to Heidi’s sorrow ridden face. Trina now locks in a full nelson, decks Taeler with a shot to the back and finally pulls the leather jacket off. She sends Taeler into the corner and hits yet another clothesline. Hendrix pretty much just continues to be tossed around as she goes to Heidi for a confidence boost that doesn’t seem to really work as Hendrix manages to turn around into a collision with Trina. Taeler rolls outside the ring as Trina tails her not far behind. Suddenly, Trina looks to give her a shot to the face, but she uses Heidi as a temporary shield and throws Trina right into the ring post! From there, Taeler rolls Trina back in and secures the pinfall victory with her feet on the ropes. Heidi doesn’t seem pleased with Taeler’s actions at all, but Taeler got the win and that’s what matters!

Thoughts: We finally got some lengthier showings and even two matches this week! Props to OVW first and foremost for going with double the female action as opposed to relegating one of them to a segment or something and doing the other match next week. I’ll start with Lei’D Tapa vs. Jessie Belle, which even though shorter, was personally my favorite of the two. Tapa does need a little fine tuning, but she’s already growing leaps and bounds for me in her dominance and OVW is only going to continue helping her. I absolutely loved the hurricanrana counter into a powerbomb, as well as the finish where she headbutts Jessie into rebounding back with the Stunner-TKO which I’m just going to call the Tapa-TKO from now on until I find out an actual name. I was a big fan of Lei’D Tapa in her gutcheck appearance so I can’t wait to see what they do with her around OVW, especially with the backstage segment seeming to kick start something that could be wildly amusing and mega entertaining. I’d personally love to see what would ensue between Epiphany and Lei’D when you put them together considering they’re such different personalities and persona’s.

With Jessie Belle, I’d only really seen her face off against Trina before and I wasn’t a big supporter of that match. However, she looked a lot better here (yes I’m aware she didn’t do much, but I’m more referring to her performance as a whole not just with a moveset). I really liked the little bits of charisma she brought in her country-esque entrance, and her movements in the ring seemed more crisp this time outside of a small miscue when setting up the Irish whip into the corner for the powerbomb. I hope we get to see more of her, but I like that they chose to go with her facing Lei’D Tapa because it gives relatively newer fans like myself the chance to see more of her than just a match or two.

Now onto Trina and Taeler’s match. Well, I first want to say I’m happy we finally got a match that was a bit lengthier (at least as a whole considering the video is over six minutes long), but I wasn’t feeling it honestly. I don’t mean this as any form of insult, but Trina isn’t really my cup of tea when it comes to the ladies in OVW based on what I’ve seen so far, and so having a match that’s pretty much all her until the ending isn’t something I’m quite big into. I’m not sure if I’ve actually said it much in reduxes or not, but I tend to be drawn towards the big character types more and Trina doesn’t give me the same vibe I get from Taeler and Heidi or Lei’D Tapa or Epiphany even. Most of her moves in this match were either clotheslines, punches, or hair tosses so I didn’t truthfully find it too exciting as a whole despite the time they got. I will say though that I loved Taeler and Heidi, and thought they were brilliant in their constant moments of Heidi trying to get Taeler to kiss her, but ultimately being turned down when Taeler just so happened to get distracted. Plus Taeler using her as a shield should prove for some tension filled moments next week that I’m sure Taeler will smoothly be able to talk her way out of.

Overall, I consider this a good week for the ladies of OVW. They got the extra emphasis that I was hoping for, but the one sided-ness of the Taeler/Trina match took a little away for me. (And I get they were playing the whole Taeler’s afraid to face her so Trina dominated most of it, but I still just couldn’t really get into the match until Taeler went to the outside towards the end.)

Until next week, peace!