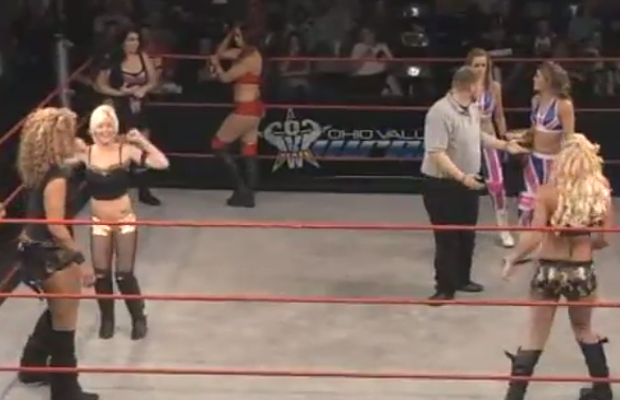 It will be a Four-Corners Tag Team Elimination match, pitting the teams of Hannah and Holly Blossom, Lovely Lylah and Taeler Hendrix, BFFs Lei’D Tapa and Ray Lynn and finally, Jessie Belle and… Stephon-ie?

The match starts with the guy in drag and Holly, who tags out pretty quickly after taking a hard shoulder tackle. Lylah comes in and gets scoop slammed. She gets tagged out by Ray Lynn, who tries to shake Stephon-ie’s hand. She dodges an attack and tries to hit him with a snapmare, accidentally taking off his wig in the process, revealing him to be Stephon J. Baxter III.

Ray Lynn then strips him of his dress, and Jessie Belle heads for the hills as the girls gang up on him. Tapa clocks him with a big boot, and Taeler pins him, marking the first elimination of the match.

Tapa enters the ring, but Taeler’s not too crazy about facing her, so she tags in Lylah and shovers her into Tapa. Lylah gamely tries to fight Tapa, but it’s no use. Tapa gives her a head butt.

Tapa continues the assault on Lylah, catching her in a chin lock as she taunts Hannah, who desperately wants a piece of her. For some reason, Tapa decides to tag out of the match, bopping Ray Lynn on the forehead in probably the funniest tag I’ve seen in a while.

Ray Lynn hops on Lylah and applies a sleeper hold. Lylah is soon able to fight her off, tossing Ray Lynn off her back. Lylah tags in Taeler, who shoves Ray Lynn into the Blossoms’ corner. Holly tags herself in.

Holly gets Taeler doubled over and tags in Hannah, allowing the twins to hit Taeler with a double dropkick. Taeler goes to tag in Lylah, but her partner drops off the apron, leaving her high and dry. Hannah drags Taeler over to her corner and tags Holly back in.

Taeler fights off Holly and hurries over to her corner, tagging in Lylah before she can dodge it again. In comes Lylah, who walks right into a double team from the Blossoms. Holly goes for the pin and eliminates Lylah and Taler.

Tapa suddenly decides she wants to enter the match and, because she’s Tapa, she’s automatically recognized as the legal woman. She manhandles Holly a bit, and Hannah busts into the ring, eager to get a piece of her. Holly dodges an attack from Tapa and tags in Hannah, who comes in guns a-blazing. She fights Tapa tenaciously until a head butt stops her in her tracks. Tapa gets ready to hit a big boot, but Holly runs into the ring and takes the boot for her sister.

Hannah, distracted by this, gets trapped into a TKO. The move gets botched a bit, but Tapa turns it into a pin, easily eliminating the Blossoms and winning the match.

Tapa decides this isn’t enough and turns the celebration into a beat down. She stomps on Hannah until Holly comes into the ring to defend her sister. Tapa easily disposes of her, though, and proceeds to plant Hannah with the TKO twice!

Needless to say, Hannah’s first title defense at the Saturday Night Special will be a tough one.

Thoughts: This match could have been a lot better, had they not relied on the whole man-dressed-as-a-woman comedic relief spot. Have you learned nothing from Santina, OVW? Well, at least he didn’t win the match. My bet’s on him to win Miss OVW, though.

The TKO botch and the confusion over Lylah’s elimination (didn’t it look like Taeler broke the pin?) marred the match as well. Still, I’ve got to give OVW credit for finding new ways to get the ladies in the ring. I’d take a sloppy Tag Team Elimination match over a Miss OVW competition any day, even with Stephon-ie parading around with a bra on over his button-down.