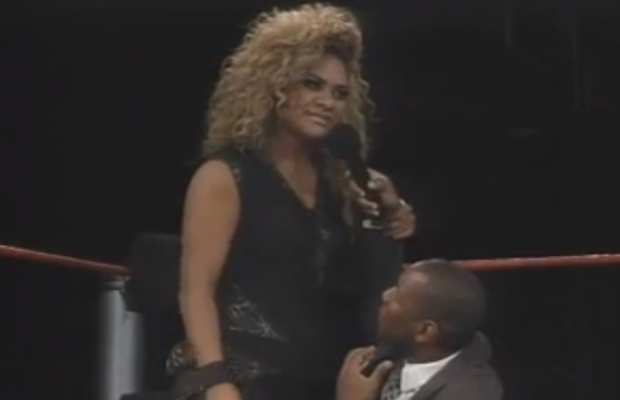 After last week’s episode of OVW, which saw Women’s Champion Trina vacate the title, things were left up in the air. Let’s see if this week’s episode does anything to get them back on track.

We jump right into the ring, where Gilbert Corsey summons Hannah and Holly Blossom, Taeler Hendrix and Lei’D Tapa to the ring.

He announces that, because these four women were the finalists in the Beach Bikini Battle Royal from last week’s Saturday Night Special, they will be competing next week in a Four-Way Ladder match for the Women’s Title! This is a first for professional wrestling.

Each of the ladies give their thoughts on this announcement. Hannah says this will be an opportunity to prove that she and her sister are the best, which was their goal when moving to OVW all the way from England.

Taeler has the chance to become a four-time Women’s Champion, and she says her victory in this Ladder match will be yet another reason she’s a “step” above the rest.

Holly reiterates what her sister said, adding that she will be the next Women’s Champion. Hannah seems to disagree with that, but what else is new?

Tapa makes poor Gilbert bow down before her with the microphone before she tells the audience that she is here to do one thing: dominate. She says she will do that next week and make Hannah, Holly and Taeler bow down to her.

Thoughts: Wow, what a 180! We go from silly Miss OVW contests to a historic Ladder match? I’d like to think that OVW heard the cries of fans that wanted them to return to their glory days, but regardless, I can’t wait to see this match.

These four ladies are easily the biggest female stars in OVW, so this match will give them a chance to prove why they deserve to be in the big leagues. Here’s hoping they give them the time to put on a barn burner. Also, I’d love for this to usher in a new era of OVW’s women’s division devoid of the silly, time-wasting segments, but I suppose they have the finish the Miss OVW competition somehow.