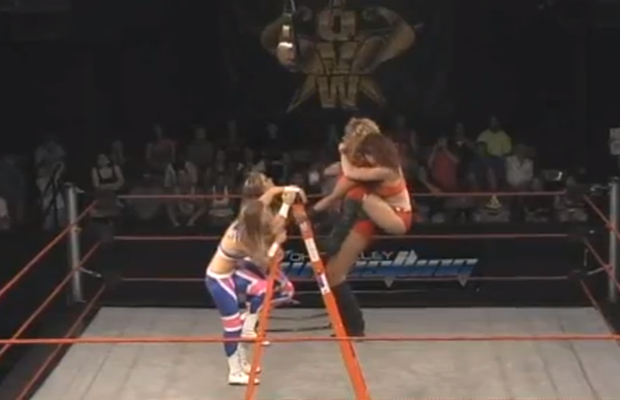 This week on OVW, we’re stepping away from tug-of-wars and Q&A sessions to witness history: the first women’s Four-Way Ladder match. Lei’D Tapa, Taeler Hendrix, Hannah and Holly Blossom will compete for the vacant OVW Women’s Title. Who will reach the top of the ladder? Let’s watch:

We’ve got a special guest ring announcer for this main event match: none other than TNA Knockout Christy Hemme! She welcomes each competitor to the ring and announces them individually before the match gets underway.

Taeler is trying to get the ladder in the ring when the Blossoms hit it with tandem baseball slides, sending it right into Taeler’s face. Ouch! As Taeler tries to remember her name on the floor outside, Tapa clotheslines both Blossoms and sends them rolling out of the ring.

Tapa grabs the ladder and brings it into the ring, but Taeler grabs the other end, trying to reclaim it. After tugging back and forth with it, Taeler decides to just see-saw it into Tapa’s face. As Taeler tries to set the ladder up in the middle of the ring, Hannah and Holly attack her. She tries to fight them off, but it’s Tapa who gets control, tossing Holly out of the ring and striking Hannah and Taeler with the ladder.

Holly climbs the turnbuckle and missile dropkicks the ladder into Tapa’s chest, but she stays on her feet! Tapa then tries to squish Holly in the corner, holding the ladder like a baseball bat, but she dodges the attack. I gotta say, Tapa looks like a monster, swinging that ladder around like it weighs nothing.

Holly then takes the other end of the ladder and rams it into Tapa’s midsection repeatedly, caught between it and the corner. With Tapa temporarily disposed, Holly sets up the ladder in the middle of the ring, but she finds herself in a fight with Taeler, and the two battle for the right to scale the ladder.

Taeler wins the exchange and is a few rungs up the ladder when Hannah reappears, knocking Taeler off the ladder. They trade blows until Hannah takes Taeler down with a vicious axe kick. She sets up the ladder and begins to climb, but Tapa soon appears out of nowhere, getting a fistful of Hannah’s hair and yanking her off the ladder.

She folds up the ladder, driving it into the midsections of each of her competitors in turn: Taeler, then Holly, then Hannah. She then sets the ladder back up, climbing it until she finds Taeler, Holly and Hannah at her feet, fighting to stop her in her tracks. They shake the ladder until it tips over, sending Tapa in the opposite direction and all the way to the mat. Is it just me, or did she come dangerously close to landing on the ladder? Ow.

Both the Blossoms are trying to set up the ladder, which now looks like they pulled it out of a dumpster. Will it even be able to stand up? Hannah and Holly start climbing up on the same side, with Taeler scaling the other side. Tapa sees this and pulls the nearest woman off the ladder, taking Hannah onto her shoulders and hitting her with the TKO. This seems to hurt Tapa as well, as her shoulder was already smarting from that fall from the ladder.

Meanwhile, Hannah and Taeler are still on the ladder. Taeler reaches out for the belt, but is so occupied with fighting Holly off that she loses her focus. She goes for a kick, but Holly catches the leg, yanking her off the ladder and sending her all the way to the mat. Holly tries to make it to the belt, but hesitates too long, and Taeler is soon on her again, grabbing her leg. Holly kicks her off, but then decides to abandon the ladder, leaping off of it and hitting Taler with a Lou Thesz press! If this was in front of a larger crowd, surely we would’ve had a few “Holy shit!” chants by now.

Holly and Hannah set up the ladder, fighting off Taeler as she tries to get to her feet. Tapa climbs up the other side, grabbing both Blossoms by their throats! She tries to choke the life out of both of them, and seems to be succeeding until Taeler appears behind her, trying to pull her off the ladder. Taeler mounts Tapa and locks her in a sleeper hold!

The Blossoms are woozy on the ladder while Taeler holds on to Tapa tenaciously. Tapa eventually knocks Taeler off, grabbing for the Blossoms’ throats again. They fight her off, though, working together to slam her face onto the top of the ladder. Tapa sways, but doesn’t fall, so the Blossoms hit her with tandem punches and send Tapa all the way to the mat!

It’s just Hannah and Holly now! Hannah sees her sister struggling to stay on the ladder and delivers a punch to the back of her head, sending her sister to the mat as well! It’s just Hannah now, and she climbs to the top of the ladder, claiming the OVW Women’s Championship!

Hannah celebrates this epic win while her sister, bloody mouth and all, is dumbfounded on the mat.

Thoughts: Wow! Just a few weeks ago people were pining for the return of OVW’s glory days, and we definitely got a taste of it here. That’s not to say that one match can signal the start of whole new era, but this was a damn good way to make up for all the silliness of the past few weeks. I mean, who would have thought we would a be seeing an epic Four-Way Ladder match back when the women of OVW were answering silly questions in the ring and playing tug-of-war?

I really enjoyed this match, needless to say. Yes, it was a spot fest, but most ladder matches are. It’s so rare to see women go at it in a Ladder match, much less have more than two in the fray, and I think these women did a fantastic job taking advantage of all the opportunities this match provided. This was definitely match of the year candidate.

I’ve also got to say that I never expected either of the Blossoms to pick up the win. For weeks, it seemed like OVW was treating the twins as interchangeable, fighting over petty things and never really standing out on their own. I’m pleasantly surprised to see that they’re building towards a sister-on-sister feud over the title. Let’s hope they pull it off better than that discarded Bella feud from a few years ago.

For the first time in a while, I’m excited to see where OVW’s going. Let’s just hope Miss OVW finishes with as little embarrassment as possible. Now that we know how hard these girls can go in the ring, it would be a crime to waste their talent on pointless comedy segments.