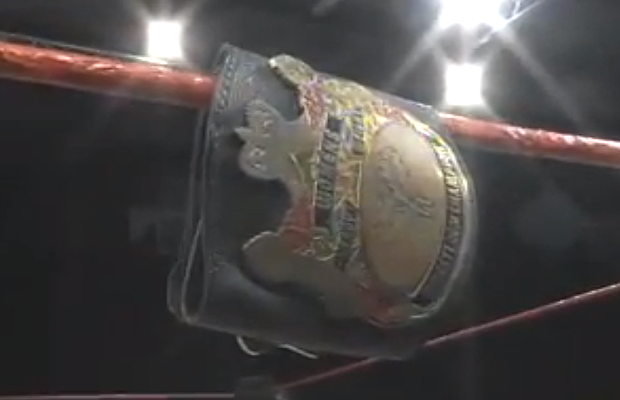 This week on OVW, we don’t see the next competition in the Miss OVW contest (thank God), but we do learn that the women of OVW will compete in a bikini contest at this weekend’s Saturday Night Special (oh no).

On the bright side, though, we see a lot of Lei’D Tapa, starting with a backstage segment in which Tapa is all Tapa-y:

In the locker room, Holly Blossom asks Lylah what she’s going to wear to the bikini contest. This takes Lylah by surprise, who obviously isn’t confident about her bikini bod. Hannah Blossom pops in to argue with her sister about who a bikini belongs to. I’m starting to think the Blossoms need to seek counseling. Seriously, those girls are always fighting!

Taeler Hendrix arrives, using Lylah’s head as a resting spot for her elbow as she expresses her confidence about winning the contest.

Out of nowhere, Lei’D Tapa appears in the room. Seriously, did she jump into the room? I’d hate to think that’s how Tapa enters every room.

New-girl-who-loves-fitness-modeling who we later learn is named Ray Lynn pipes up, unwisely, that she didn’t think Lei’D Tapa would be here this week. She thought Tapa would be ducking Trina after the hurting Tapa put on her last week. Tapa says she’s here to “kill” someone, and challenges her to a match.

Airhead Ray, against all logic, is excited about wrestling her first match. She better hope there isn’t a length of rope lying around..

Ray Lynn eats Lei’D’s boot to start the match, and I’m assuming that that’s how the rest of the bout will go. Tapa stomps on her, elbows her and pretty much flattens her out.

The referee scolds her for being too rough on Ray Lynn, and in response she shoves him to the mat, getting herself DQed.

Tapa doesn’t seem to care, though. Remember, she said she wanted to kill someone tonight. I don’t think her win/loss record is a big priority right now.

She continues to beat down Ray until Trina makes the save, knocking Tapa out of the ring. Belt in hand, the OVW Women’s Champion take the microphone and tells the fans that due to Tapa’s attack last week, she injured her knee. Her career might be over, but she’s hopeful that she can recover and come back stronger than ever. For now, though, she’s relinquishing the Women’s Title. Trina leaves the belt hanging on the ropes as she exits the ring.

Thoughts: I certainly don’t mind that the bikini contest is taking place on the untelevised Saturday Night Special. I much preferred to see the Tapa/Trina feud advance. But, as we saw, Trina won’t be around to continue it. I’m interested to see what will happen to the Women’s Title – will they turn the Miss OVW contest into a competition for the belt? I hope not, because the belt deserves better than those silly contests.

Will they run a tournament to crown a new champion? I like the sound of that. In fact, that’s what I was hoping the Miss OVW contest would be. Maybe we can kill two birds with one stone and just merge a title tournament with the competition. The winner gets the belt and the title of Miss OVW. Taeler can keep the tiara.