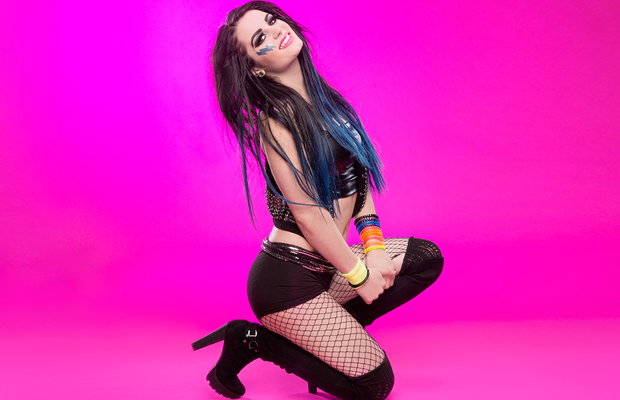 Paige recently spoke with IGN to discuss the return of Total Divas and the strides she made in 2015.

Paige teased the new season of Total Divas, talking about Mandy‘s addition to the cast:

“There is a new girl called Amanda, which is strange for myself because I did a show called Tough Enough for WWE, which is basically the American Idol of wrestling. She didn’t win but I was her judge and had to play a meaner role on there. Having her on the show is a big surprise, which you’ll see in this season when she gets introduced. None of us are expecting it. But there’s going to be drama, like always. There’s a lot of really, really nice stuff in there this season which I’m really looking forward to. Myself and Foxy have a lot of good episodes, which you’re going to see, and there’s going to be some new characters in it. I’m really excited for it this time around and I’m really excited for you guys to watch it.”

Paige was asked about showing different sides of herself outside the ring on Total Divas and Tough Enough, explaining the different demands of the two shows:

“It’s really cool because Tough Enough, I had to stay in character but could show a little bit of myself as well. WWE, I’m just full-on Paige, my in-ring character. Total Divas is where I can completely be myself and be my lunatic, weird person. It’s cool but you have to switch on and off to all the different things. because Total Divas could be filming at Tough Enough. We went from Raw, where I was completely my character all the way, to Tough Enough, where I can be half character, half me, and then Total Divas is filming, so I have to be completely Paige, my outside self. It was very random but I learned quickly how to switch between the different characters. It’s kind of wild.”

Paige was also asked about the PCB, revealing that she pitched the idea of breaking them up:

“I loved it. I love all the girls that came up and they all deserved it and are amazing athletes. It was fun. Our team had to break up at some point and you needed someone a little bit edgier to shake things up. I definitely pitched to shake things up and break the group up a little bit. [Laughs] My character is one that doesn’t really play well with others anyway when we’re inside the WWE ring, so what better way to do it then have me screw them over again? It was definitely fun and now I get to work with them on opposite corners.”

With WrestleMania around the corner, Paige was also asked about role the Divas will be playing in this year’s big show:

“Yeah, obviously we don’t know what’s going on right now but hopefully all of us get to be involved in some sense. Because WrestleMania is such a big deal for our company and for the world, really. It’s one of the biggest shows of the year. I hope we get to be a part of it. I’d be sad if we didn’t.”

In the rest of the interview, Paige talks interacting with fans, changing her mind on Total Divas and more. Read the full interview on IGN.