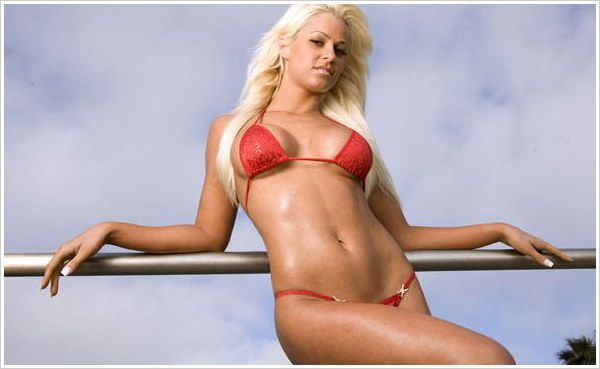 Rising SmackDown Diva, Maryse, may have been wowing the crowds in her mixed tag match that also featured Eve at WWE’s SummerFest this weekend – but after the event, our French-Canadian hottie got a grim taste of what it is to be a celebrity. Reports out of the event state that a paparazzo was seen getting in Maryse’s face with his camera, making her run away and hiding behind a corner. Maryse returned, visibly in tears. Read one fan’s account below, courtesy of PWInsider:

I was standing just inside the lobby of the hotel having a conversation with Maryse telling her about my friend Jared in hopes she would take a picture with him. (I met her last year so I wasn’t interested). In the middle of our conversation, as she was starting for the door to come out and take a picture with Jared, this paparazzi guys comes into the hotel and shoved his video camera in Maryse’s face causing her to grab her bag and run around the corner. At this point the WWE PR people went haywire.

This guy had already supposedly gotten into another of the diva’s face earlier in the day and now he was out of control. He was ordered off of the property and the police were called. He refused to stop recording and leave. He even went as far as to make the remarks that why doesn’t she come out and take a picture with this guy in the wheelchair. The WWE people made it very clear that she wanted to, but he needed to turn off the camera first. He refused saying it was his right and asked why doesn’t she just come out.

The WWE people repeatedly asked him to just let her come out and take care of this fan but he got rude and distasteful. At some point Maryse did come out, crying by now, jumped in her limo and left. The paparazzi literally chased the limo down the street. When it stopped at the Stop sign, they stood in front of the limo snapping pictures.