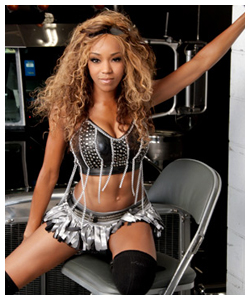 #9: ALICIA FOX
LAST YEAR: — 2008: —
After being one of the breakout Divas of 2009 and ranking at #10 last year on the Perfect 10, Alicia Fox moves up a notch in 2010 after finally accomplishing what many felt was inevitable: becoming Divas Champion.

Since she broke away from ECW and debuted on SmackDown and then Raw last year, it seemed the Foxy one was destined for solo stardom in the WWE. Twice in 2009 she came close to the belt, but proved unsuccessful in tussles with Mickie James and Melina. But 2010 saw Alicia win her first Divas Championship back in June, a win that was surprising yet unsurprising at the same time. There was little doubt that Fox would eventually be champion but given that the storyline at the time was Eve vs Maryse, Alicia didn’t seem like a likely winner when she faced off against the aforementioned as well as Gail Kim in a fatal four-way match at the Fatal 4-Way pay per view.

Despite not being in the title picture for the whole year, Fox managed to stay somewhat relevant. She made it to the semi-finals of the Divas Championship tournament before losing to Gail Kim, competed at WrestleMania at March’s end and then as mentioned, went onto become champion. It was during her championship reign that we saw the Foxy one take to the microphone more, establishing herself as a bratty heel champion — which would later be cemented by her feigning injury during a title defense against Eve.

After declaring that she was the top Diva on Raw (and the ‘Undefined Divas Champion’), Alicia’s title reign came crashing down around her thanks to the return of Melina who defeated Fox for the Divas Championship at SummerSlam in August. Again, Fox moved to the background after her time in the spotlight but did manage to keep herself busier than most with multiple matches on Raw and WWE Superstars.

For the past few months, Fox has most been seen on the third season of NXT where we found out she was a ‘hungry piranha’ as she mentored Maxine. Though her Rookie Diva didn’t last long in the competition, Fox saw regular competition with the likes of Kelly Kelly and Naomi.

Despite her star slipping a little since her rise to prominence in 2009, the Divas Title finally came a-knockin’ for the rising Diva, as did a plum spot on NXT, as well as regular matches with the likes of Natalya, Melina and others.

One could suggest that her Divas Championship reign was prematurely ended by the returning Melina. Could she rectify that by becoming a two-time champion in 2011?

Check back tomorrow for #8