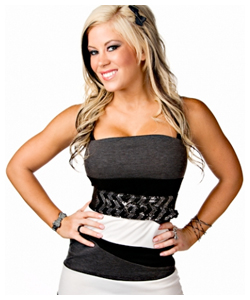 #2: MADISON RAYNE
LAST YEAR: — 2008: —
Much like Layla‘s rise in the Divas division, 2010 was the year of the Rayne in TNA. After Angelina Love‘s release in September 2009, Rayne found herself becoming the leader of The Beautiful People going into 2010, despite Velvet Sky being one of the group’s founding members. Finding her feet in TNA, Rayne has gone onto become a three-time Knockouts Champion within the span of 12 months and pretty much the queen bee in the company.

Rayne’s ascension to Knockout glory began in January when Angelina Love returned to TNA, turning babyface and feuding with Rayne and her Beautiful cohorts. Rayne led her group to victory in March as she, Velvet and Lacey won the Knockouts Tag Team Championships. Not content with just that, Rayne pinned Tara in a ‘Winner Take All’ tag team cage match in April, becoming the Knockouts Champion effectively allowing The Beautiful People to hold all the Knockouts gold. Rayne made history as the first Knockout to hold both belts simultaneously.

In May, Madison became known as the ‘Career Killer’ when she put her belt up on the line against Tara at Sacrifice with the stipulation that if Tara lost, her TNA career would be over. After ending Tara’s career, she also eliminated on-off Knockout, Roxxi from the company in June at Slammiversary in a second ‘Title vs Career’ match.

But it would be her constant rival Angelina Love that put an end to Rayne’s reign of terror at Victory Road, when she defeated Madison for the belt via disqualification due to interference from a mystery figure who the referee believed to be Velvet Sky or Lacey Von Erich. As per the rules of the bout, should either interfere, the belt would change hands. As the referee couldn’t prove that it was either Velvet or Lacey under the mysterious biker helmet, the belt was handed back to Rayne for her second championship run. That run would only last a mere three weeks however, as Love pinned Madison fair and square for the title on a special episode of Impact in August.

With her new alignment with the Mystery Biker Chick, tensions mounted within the Beautiful camp as Velvet and Lacey claimed she had developed an attitude and were wary of her friendship with the mysterious biker. After calling a truce, things came to a head as Madison and the biker inadvertently cost Velvet and Lacey the Knockouts Tag Team Championship.

Soon the original Beautiful People reunited and teamed to face Rayne and the biker, who were victorious. In an unmasking, it was revealed that the biker was none other than Tara, the woman that Rayne had retired months back. Rayne had brought her back to TNA to benefit her own career, it was revealed. This was none more so evident than when Tara won the Knockouts Championship at Bound for Glory in October, but then laid down and allowed Rayne to win the belt from her just a week later on Impact as she ‘owed her career’ to Rayne.

The reign of Rayne continued right throught the end of the year, as she ends 2010 as Knockouts Champion. After aiding her partner, Tara, in her feud with Mickie James, James’ sights are now set on the champion going into 2011.

In 2010, Madison Rayne proved to the world that she is the top Knockout in TNA. Her metamorphosis from Angelina and Velvet’s lackey into bratty, shouty heel queen has made her into the success story of the Knockouts division in TNA and perhaps one of the top success stories in TNA as a whole.

Going into 2011 with her belt firmly around her waist and a feud with the world-famous Mickie James in effect, it’s good to be Madison Rayne.

Check back later for #1