The Perfect 10 returns! The premise is simple: We will rank the ten Divas or Knockouts who we think have had the best week of television, similar to WWE.com’s Power 25. Who will make the grade and who will fall short? It’s all new and exclusive only at Diva Dirt! 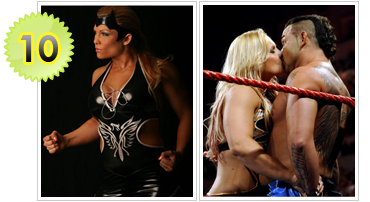 10. Beth Phoenix (New Entry)
Kicking off our Perfect 10 is Beth Phoenix suffered a loss at the hands of Kelly Kelly this week, one week after winning the Women’s Championship. As well as faltering in the ring, Beth’s relationship with Santino Marella was on the rocks, with a break-up and make-up on Raw. How very Hills-like!

Erin: It’s embarrassing as hell to lose to Kelly Kelly, even with how far that girl has come in the ring. I don’t care if it was a fluke win, but having the Women’s Champion lose to such an inexperienced girl is pretty crappy. I liked seeing her beat the crap out of Santino, though that little “spat” didn’t last long. I would’ve preferred it if she stayed pissed at him rather than kissing him later in the night, but I guess that’s an “unstable” relationship for ya. At the very least, it keeps her character interesting, which is a problem she’s had since the beginning.
Melanie: I’m fine with Beth losing this match, it’s not as though Kelly totally out-manuvered her for the win. Even Beth Phoenix must taste defeat every now and then. 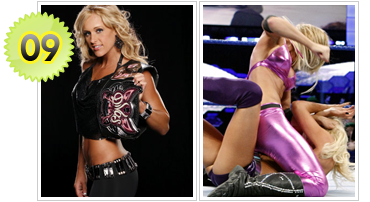 09. Michelle McCool (New Entry)
The Divas Champion, Michelle McCool makes #9 on the list after suffering a loss to Maryse and Natalya on SmackDown. Despite the loss, Michelle showed a fighting spirit in her post-match brawl with Maryse. This girl’s got game!

Erin: She’s still the #1 girl on SmackDown, that’s for sure. It’s just a question of who she’s feuding with – Maryse or Natalya? At this point, it looks like Maryse, and if that’s the case, I don’t see Michelle relinquishing that top spot any time soon. She’ll be climbing up this list in the weeks to come.
Melanie: Michelle looked great on SmackDown and even though her team lost, I like that we finally had some emphasis on the actual Divas Champion. Since Maria debuted, it seemed like it was all about her but now we’re back to business: the Divas Champion at the forefront of things. 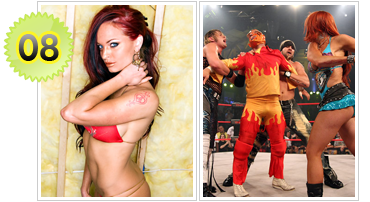 Erin: It’s always cool to see a girl mix it up with the guys, even if it’s minimal. Maybe Christy will be getting a bigger push in Gail’s absence, eh?
Melanie: I doubt that Christy will see much in-ring time in this match, but she came across really well on Impact this week. 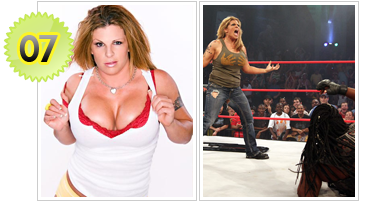 07. ODB (New Entry)
ODB certainly had a fire lit under her on Impact this past Thursday, enough to rank her at #7 in our countdown. ODB went after the unstoppable Awesome Kong in an all out brawl that had to be stopped by officials. As the Joker would say, “What happens when an unstoppable force meets an immovable object?”

Erin: That sounds like quite the matchup – monster vs. monster! I think ODB could pose the biggest threat to Awesome Kong that anyone’s ever posed. I’d love to see them in something unsanctioned, like a street fight – now THAT would be a brawl.
Melanie: The brawl between these two was a lot of fun! I think this will be added to the No Surrender match and it should be a good match. These two faced off in February at No Surrender but at that time, ODB wasn’t over as she is now. ODB could come out of this match as the new top face among the Knockouts. 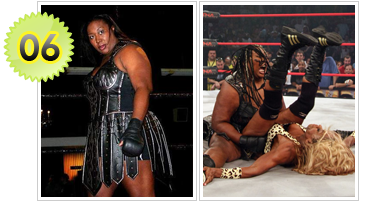 06. Awesome Kong (New Entry)
Though Kong showed signs of weakness in her brawl with ODB, that doesn’t deny her victory over newcomer Sojourner Bolt. Kong was as dominant as ever.

Erin: She’s so unstoppable that it almost gets dull, but that doesn’t take away the fact that she’s the toughest that TNA has to offer. A feud with ODB can probably lend her a little vulnerability and still keep her “monster” persona. I don’t think anyone will ever be able to completely dethrone Awesome Kong, to be honest with you..
Melanie: Kong scored another victory following another vicious match. 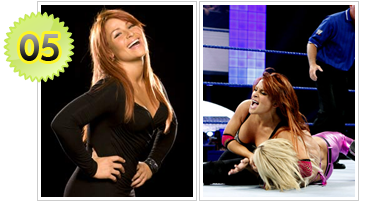 05. Natalya (New Entry)
We are now half way through the countdown and at #5 it’s Natalya. Natalya’s team scored the victory in SmackDown’s tag team match. Natalya and partner, Maryse scored the upperhand, once again, over Michelle McCool and Maria.

Erin: I’m disappointed that Natalya is being overshadowed by Maryse, because it seems she had her feud with Michelle stolen right out from under her! She’s still an excellent wrestler and heel, so hopefully there’s still something there for her. I’m praying she doesn’t get the “Victoria treatment”. She’s arguably the best wrestler on SmackDown, as this match demonstrated, so it’d be a shame for her talents to go to waste.
Melanie: Natalya is the best female wrestler on the SmackDown roster, if you ask me. I really want to see her get that Divas Championship shot but it seems she’s been pushed aside for Maryse. That doesn’t deny that she is a force in the ring and great to watch. 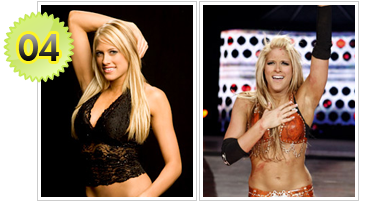 04. Kelly Kelly (New Entry)
Surprise! Kelly Kelly scored the biggest break of her career on Raw and now she breaks onto our countdown equally big at #4! Kelly upset the Glamazon on Raw, could a title shot be in her future?

Erin: That was a helluva shocker, even if it was by a rollup. Seeing someone like Kelly who a year ago couldn’t even land a handspring elbow properly do as well as she is in the ring is mindboggling. She needs to keep that underdog persona, and slowly but surely prove herself as a more capable wrestler. That and develop a personality. There’s only so far you can go on being the blonde good girl. I’m more than happy to root for her if you give me a reason to, WWE!
Melanie: Kelly scoring the victory over Beth Phoenix was definitely unexpected but I think it’s a fine move. Kelly has worked really hard over the past few months on Raw so it’s nice to see her rewarded with a win. 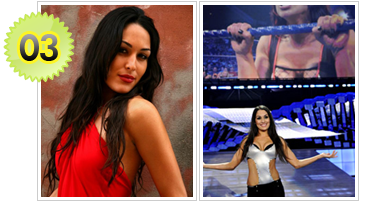 03. Brie (and Nicole… kinda) Bella (New Entry)
What a position to be in on your inaugural match! Surpassing the established veterans to rank at #3 is Brie Bella and to a lesser extent, her twin sister Nicole. While Nicole scored the victory after a switcheroo under the ring, it was Brie who wrestled most of the match and impressed us all with her unique style. We expect big things!

Erin: I was soooo impressed by her/them. I’m always impressed when a new girl has decent ring presence (like Maryse), so needless to say, I’m taking a liking to her. I like the unique move set she brings, and the “twin” thing could make for some interesting stories. Though, it seems like Brie has a better personality than Nicole – I don’t know, I just didn’t like the cocky celebration Nicole was doing when Brie initially was pretty reserved.
Melanie: Strong start for Brie, great match. I’m hoping to see more of the same from both her and Nicole. 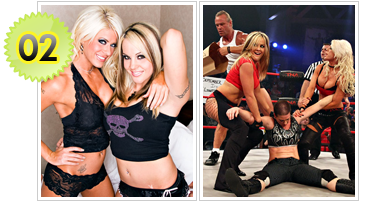 02. The Beautiful People (New Entry)
Angelina Love and Velvet Sky continue to set the bar as TNA’s resident bad girls and rank at #2. These two scored a victory over TNA Knockouts Champion, Taylor Wilde and Roxxi on Impact with an assist from the third wheel of the Beautiful People – “Kute” Kip James. Nonetheless, heading into Angie’s big title match at No Surrender, the Beautiful People certainly are on a roll exceeding all the other Knockouts this week.

Erin: I guess two heads are better than one, since these two always to be there to help out the other, allowing them to get the upper hand more often than not. They’re an interesting team, and if Angelina has Velvet by her side at No Surrender, she has a great chance of beating Taylor Wilde. Though, I wonder how the duo would handle having one of them as Champion.. Trouble in paradise, perhaps?
Melanie: These two are on a roll and I think it would be a darn shame if Angelina didn’t win the Knockout Championship at No Surrender. I think Ang should win and the Beautiful People should be recognised as co-champions, they’ve done enough now for the title. 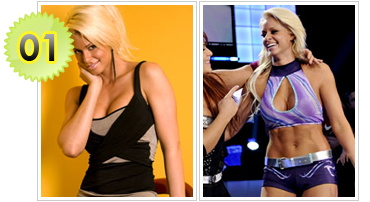 01. Maryse (New Entry)
Surprise, surprise! This may shock you, but Maryse’s performance on SmackDown was undeniable. It looks as though Maryse has jumped to the front of the queue for Divas Championship match opportunities, after accosting Michelle earlier in the show – Maryse then pinned Maria and attacked Michelle. Talk about an eventful night! Maryse made it quite clear she wanted Michelle’s Divas Championship. Maryse put herself on the radar on SmackDown and opened up our eyes in the process, there is a new top heel on the scene…

Erin: I cannot believe how much she’s progressed. At one point, she was just the blonde chick who sat in bubble baths and spoke minimal English, and now she’s a pretty damn capable wrestler. I’m thoroughly impressed by her, even more-so than some girls who have been in the company much longer than her. I guess some just have ring presence, while others don’t. Though, I don’t know how she would fare against Michelle in a Diva’s Championship feud. I guess just the fact that she’s been rocketed to this position is proof enough that the powers-that-be have that kind of faith in her.
Melanie: Maryse’s performance on SmackDown seemingly rocketed her to the top of SmackDown’s women’s division. Considering the fact she was barely seen on SmackDown at the start of the year, she has grown and developed into an all around great Diva. A great look, ring presence and impressive heel character. I never thought Maryse would ever rank at #1 on the Perfect 10 but she’s really proven herself to fans over the past few months.