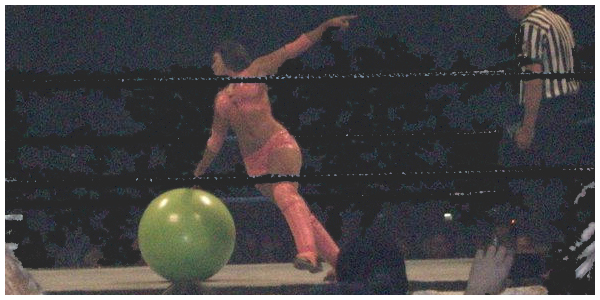 Tony Chimel announces the guest hostess for the evening and introduces Ashley Valance. No one around me seemed to know who she was. I started a ‘Bring back Mickie’ chant but no one around me joined in. (Awkward!)

She announced the following Divas match was scheduled for one fall. On saying this, the guy next to me said to his friend “I’m off for a piss and to get some more beer.” Asshole!

She introduces Layla, who comes out to her own music (hooray!) and carrying a large green ball. She gets some mild heel heat from the crowd i however was cheering very loudly, something I seemed to be doing for most of the heels all night! She shouts at Ashley to get out the ring, saying “Who are you?” Next out was Kelly Kelly to a good pop.

Bell rings and Layla begins doing squats, press ups and dancing around the ball, she then reacts to the crowds booing. Meanwhile Kelly picks up the ball and throws it to Layla when she turned around, she throws the ball again to Layla. Kelly then hits a Thesz Press and slaps Layla around then throws her outside. As Kelly comes outside Layla pulls her leg from underneath her causing her to fall in the apron.

Layla then puts on her submission that she’s used a couple of times lately on Kelly and shouts the referee to count when Kelly’s shoulders were on the mat. Submission goes on for a while longer. Layla then breaks off. Layla then heads outside and while the referee is attending to Kelly, Ashley pulls Layla’s leg from outside allowing Kelly to roll up and get the victory.

Nothing too exciting in the match but always great to see the Divas. This is the first time I have seen both Kelly & Layla wrestle as they have previously been here as manager, guest timekeepers/referees etc. Both were looking hot, Kelly has an amazing stomach.

Ashley came out later on to throw a couple of t-shirts to fans. She looks a lot like Maria Kanellis in my opinion.