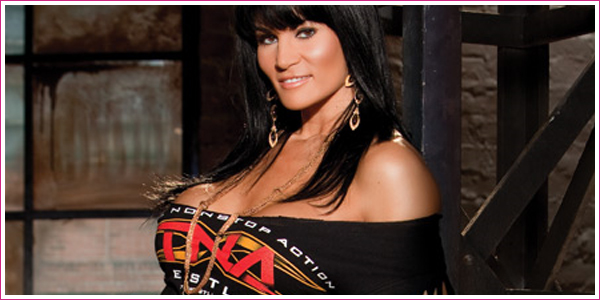 The folks at Playboy sent out the following press release, touting Knockout Traci Brooks‘ photoshoot for Playboy.com’s Cyber Club. The first part of the photoshoot was made available last Thursday with the second part being delivered this Thursday.

In the press release, Traci discusses what she plans to do after wrestling noting she wants to stay with TNA and work behind the scenes:

Traci found her way to wrestling after being named the Toronto Sun’s Sunshine Girl in June 2000. Along with her photo ran the quote, “I want to be the next wrestling superstar.” She began training professionally in Toronto and by 2003, was in a schoolgirl outfit wowing the crowd in the TNA ring.

But Traci wasn’t always your typical TNA hottie. She grew up alongside two brothers on a pig and chicken farm in Saint Mary’s, Ontario and from the sixth grade on, would watch Maple Leaf wrestling with her father while picturing herself in the ring. As a tomboy, she never quite understood the purpose of Valets (the women who accompany the wrestlers to the ring) and used to think, “Why don’t they get into the ring and prove they can wrestle?” Now a Valet herself, she still prefers the rougher positions. “I would rather be inside the ring getting punched in the face,” exclaims the bombshell.

Nine years later, Traci is still a part of the TNA family and has no intentions of leaving even after her wrestling days are over. “TNA is my home. It has such a family atmosphere. My entire wedding party is made up of wrestlers,” explains Traci. Once she is done wrestling she plans to stay with TNA and work in the PR department.

On October 18, 2009, Traci will appear at the TNA Bound for Glory competition on Pay-Per-View. The competition will be live at the University of California Irvine’s Bren Events Center.