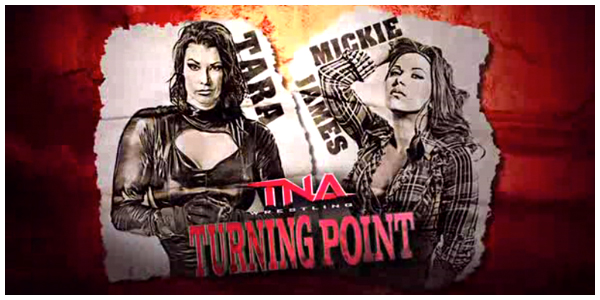 Former WWE Women’s Champions, Mickie James and Tara collide tonight in a big grudge match live on pay per view. Who will get the last laugh? The Diva Dirt team weigh in…

Cryssi: Let me start off by asking the Diva Dirt World a question. Does it make me a bad person seeing as how I had no clue these two were even feuding? Last I checked, I thought Sarita was getting a push, but no matter. Tara and Mickie are ex-WWE stars which means they will be built up bigger than any indy/SHIMMER/ROH girl ever. Seeing as how Mickie is the newest, and perhaps the biggest signing TNA has made since Kurt Angle (because lets face it, Hulk Hogan/Flair/Bischoff are not prizes) I expect to see her pushed to the moon. She’s probably going for Madison after tonight so yeah, Mickie totally wins this match via handcuffing Tara to the ring rope and forcing her to listen to ‘Hardcore Country.’ Tara’s ears will start to bleed and for her safety, the match will be called and Mickie will be declared the winner. Meanwhile Tara will have to be committed because that song will make her want to jump off Epcot Center and that’s not really healthy.

Erin: TNA is never one to slack when it comes to pushing those new acquisitions that have a whiff of the WWE still on them, and Mickie’s still carrying the scent, while Tara’s has all but worn off. Thus, they’re probably dead set on giving Mickie a nice big push for as long as they can. The fact that this is a storyline based on their former Diva status only reinforces the belief that any association to the WWE makes TNA see dollar signs, and having one of the most popular Divas in recent history at their disposal tells me that they’re not going to do much to hold her back this early on. Add to that the fact that this match, in all likelihood, will be a stepping stone to Mickie challenging Madison for the Knockouts Title, and it becomes clear that Tara probably doesn’t stand much of a chance. While this match has the chance of being pretty damn good, I don’t think it’s going to serve as much more than preparation for the eventual title feud. Mickie wins.

David: I’m excited for tonight’s Turning Point match between Tara and Mickie. Not just because of their TNA spots, but because we know their WWE history and they have used that as part of their storyline. I liked the aggression between both girls on this week’s Impact and I expect a hard-hitting match between these two veterans at the PPV. I think Mickie will get the victory Sunday because TNA brought James in to be the star of their Knockouts Division, and I just don’t see the cougar defeating their golden goose.

Jennifer: Is the outcome of this match really in doubt? There’s none in my mind that this is just a prequel to Mickie challenging Madison for the Knockouts Title. She’s gotta get through Tara first, however. I definitely see Mickie getting the 3 count on Sunday.

Melanie: Finally! A Knockouts feud I can get behind. I have been hoping to see a feud between Mickie and Tara from the moment Mickie signed and they have wasted little time in making that happen. I think the build to this match has been sufficient — including some great segments on Reaction — so I have high hopes for this match. I would love this to be the start of a big new push for the Knockouts, giving them 15-20 minutes on pay per view like we got in those early Kong/Kim matches. I’d love to see Tara go over here and continue this feud into the New Year, with Mickie overcoming Tara and then beginning a feud with Rayne for the title after January 1st but I’m not so certain. I feel this will be a victory for Mickie.

Steven: I thought for sure that Mickie would be going straight after Madison Rayne for her title, so it’s a nice to see her have to go through Tara first. That said, this whole “Mickie got Tara fired” storyline is lame and just a way to play off of both ladies past careers in WWE. Anyway, TNA has made it very clear that they want to push Mickie James for the title, so I expect Mickie to pick up the win tonight and start feuding with Madison Rayne for the Knockouts Championship in the coming weeks.