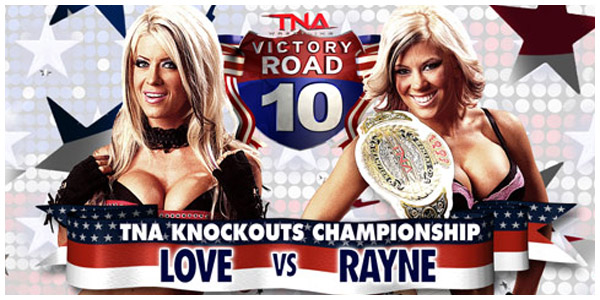 Angelina Love puts her career on the line against Madison Rayne tonight at Victory Road in a ‘Title vs Career Match’. Who will come out on top? The Diva Dirt team weigh in…

Cryssi: I think it’s basically set in stone that Angelina is going to walk out of Victory Road as the champion. How she does it is a whole other matter. Whether Lacey and Velvet end up costing Madison the title or not, this feud needs to be finished and put in the books. Shame that won’t happen but congrats to Angelina who will be the first ever four-time TNA Knockouts Champion.

David: Someone has to explain to me why people are so eager to put their careers on the line in exchange for a championship opportunity. It makes no sense to me. Is a Knockouts Title match at TNA’s Victory Road so important to Angelina Love that it is worth ending up on the bread line? I like my job…I’d like to keep it. Wrestling used to book “career” matches very sporadically to give them more meaning. (Remember when the Ultimate Warrior “retired” Randy Savage at WM7? It felt important.) Now it seems there are career matches every week. What would have been so wrong with a solid Madison Rayne title defense where the other BP were barred from ringside? In any event, I think this is night the Beautiful People get in each other’s way and cost Madison the belt… Angelina leaves the new champion.

Jennifer: This one seems like a no-brainer. There’s no indication that Angelina’s contract is running out or that she’s expressed a desire to leave. Her buildup to this match has been huge as well. I think when all’s said and done Angelina will be leaving Victory Road as a four time Knockout’s champion.

Erin: Angelina has this in the bag–I’m sure of it. When these types of matches come up, with one competitor’s career on the line, it’s clear who is going to win. Either there have been rumors of that competitor leaving, or they’re on their way to a victory. I feel that, given her spotty past with TNA, news of Angelina leaving the company would have created some waves by now, and since there hasn’t been even a ripple, I think she’s safe. Madison’s title reign isn’t so safe, though.

Melanie: To be honest, I haven’t really been following TNA since last month’s Roxxi-gate. I know that Angelina has been working her way through The Beautiful People members and many are speculating that there may be some sort of face/heel turn for any of the four women involved in this match. I’m going to throw a wildcard in there… How about Tara [who has apparently re-signed with TNA] appears out of nowhere and costs Angelina the match? These two were feuding before Angelina was injured and Tara left. You could have her come out and cost Angelina her career. Then from there, you could have a storyline where Angelina is brought back via a loop-hole because she didn’t lose the match of her own accord and perhaps she calls out Tara and asks for her to be reinstated so they can finish what they started in the ring. It’d be fun to see but yeah, I don’t see it happening. I expect Angelina will come out on top. It’s a shame though because Madison was doing a great job as champion and her run hadn’t gotten stale yet.

Steven: To be honest, the writing is on the wall with this match. I honestly don’t see tonight being the ‘end’ of Angelina’s TNA career. Despite the stipulations, I fully expect Velvet and Lacey to insert themselves into this match, but maybe not the way we expect. In any case, I see Angelina leaving tonight’s PPV as the new Knockouts Champion.