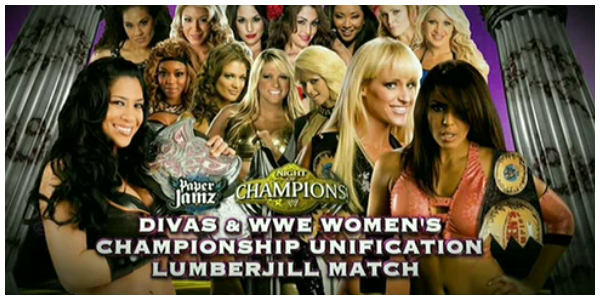 History will be made tonight when the Divas and Women’s Championships are unified at Night of Champions. Who will walk away as the first ever unified champion when Melina faces Michelle McCool? Our predictions below…

Cryssi: As I stated in my SmackDown Redux, I’m not buying for one second that Lay-Cool are actually fighting. This is little rift between the two is nothing more than a cheap ploy to throw the Divas Champion off her game. They want to get inside Melina’s head and lull her into a false sense of security going into Sunday night. Melina is gonna come out all smiles and ready to face Michelle for the right to become the first ever unified champion of the Divas division. Michelle and Melina are going to square, get ready to fight, and all of a sudden Layla is gunna waltz out, Kaval and Vickie Guerrero in tow, and announce that the match is now a triple threat since she is the rightful Women’s Champion. Lay-Cool are gonna act like they’re pissed and BAM! Melina is gonna become the victim of an instant double team. The Divas Champ is gonna fight valiantly but in the end she’s going to come up just a little short. Or is she? NOT SO FAST MY FRIEND! Lay-Cool’s plan is going to backfire. Layla will end up being the one pinned. Michelle will have a mental breakdown and blame Layla for losing their title. And Melina, bless her heart, is going to lift both of those belts sky high and share her tears with the entire WWE Universe. Kodak moment.

David: I’m not thrilled that the WWE is unifying the Women’s and Divas Titles, but I am looking forward to seeing Melina and Michelle McCool wrestle at Night of Champions. These two rarely disappoint in the ring, and when you combine their skills with the other storyline elements (the title unification, tension in Lay-Cool, and the lumberjacks) the WWE really should deliver an interesting match. I am hopeful that after the title is unified the WWE will devote more time to booking interesting storylines that don’t just center on the championship belt. I think a Melina loss Sunday night would be confusing because she has been pushed so strongly since her return, so I think Melina will unify the title and LayCool will become even more divided.

Erin: I never thought the WWE would take the title off of Melina so soon, but this match gives me some doubts. Michelle is clearly the WWE’s golden girl, as she’s held a title (co-champ or otherwise) for what seems like forever. Part of me thinks they’ll reward Michelle with the unified championship based on that history. Also, the fact that the champ will have to travel between Raw and SmackDown makes me think the WWE sees this as an opportunity for more Lay-Cool now that their NXT duties are done. I’m picking Michelle to win and become the unified champion.

Jennifer: The WWE is going full steam ahead with it’s plan to unify the titles, so only time will tell what happens to the women’s roster as a whole. There’s been little to no buildup for this match, other than Lay-Cool challenging Melina on Raw a few weeks ago. Hell, we didn’t even see Melina last week on Raw! Meanwhile on SmackDown, there’s dissent in the ranks of Lay-Cool (with poor Kaval caught in between) over who would face off against Melina. Michelle wound up being the lucky one thanks to some dirty tricks. I have no problem seeing Melina vs Michelle since they’ve had great matches against one another, but Layla was clearly screwed out of proving she was more than a flunky for Michelle. I see Melina coming out the winner at Night of Champions, either due to miscommunication between Lay-Cool or Layla outright causing Michelle the loss.

Melanie: This is a huge moment in history… the two Divas belts being unified, so why am I not the least bit excited? The lack of build-up to this match and lack of interaction between Lay-Cool and Melina has killed any momentum they could’ve had going into Night of Champions. With Layla being conned out of competing in this match by Michelle on Friday night, I expect her to screw Michelle out of the unified championship. Melina wins.

Shanti: I could really care less about this match and who wins. That may sound quite harsh, but it’s true. The WWE didn’t give me a reason to care about it. That’s not a knock on either of the women involved in this. This is simply about WWE creative and their lack of effort regarding the build up to this match. This is a historical time for the Divas division. There is a possibility that one of the most historical belts in all of wrestling could be gone after tonight and they give us a very lackluster/unorganized build up. That’s not saying the match itself will automatically be that way too, but it doesn’t have as much meaning and hasn’t drawn me in to the point where I’m just dying to see it like it should feel. Am I surprised? Of course not. Is it sad? Yes. I know this sounds like more of a rant than a prediction, but this is how I feel. With that being said, I think Melina is going to win tonight. I also think that if they are not going to make another belt, the Divas belt will be staying around for the simple fact that it’s not the belt that is “broken.”

Steven: This is actually a really tough choice to make. Both Lay-Cool and Melina have had really strong showings this year. Melina made her return and shot straight to the top of Raw’s Divas division, while Lay-Cool have ruled SmackDown with an iron fist. However, after the events that occured between Michelle and Layla this week on SmackDown, I have to think the tension between them will finally come to a boiling and cost them the titles in the end. I predict that Melina will walk out of Night of Champions as the undefined… erm… undisputed Divas Champion.