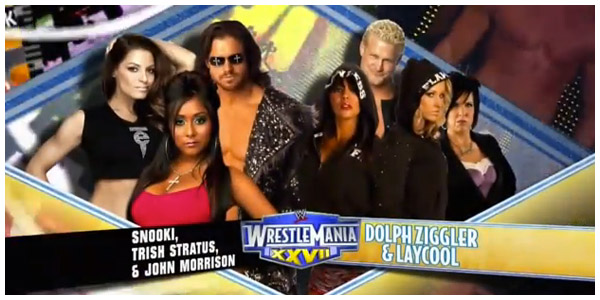 WrestleMania is here! Will Stratusfaction be delivered? Will Snooki serve up some ‘Jersey’? Or will Lay-Cool prove to be flawless? The Diva Dirt team weigh in…

April: I am going to have to say that this WeestleMania is going to be the year of the brunettes. Trish Stratus, Snooki & John Morrison are going to take the win on this one. WWE wouldn’t hype up the return of a class act Diva and the addition of a “celebrity” if they couldn’t win it. Plus, on the experience side, I think Trish has it. You mix her with the crazy in-ring style of Morrison and it is bound to be fantastic. I love Lay-Cool and Dolph Ziggler but I have a feeling they’re going fall victim to the power of the Snook this time.

Chenda: Even though the advantage may be with Lay-Cool and Dolph Ziggler in the numbers game, which they have used to pull out victories over the last several weeks, WrestleMania is usually about comeuppance. I say usually but that isn’t always the case. With that being said, I’m going with the Brunette Mafia, Trish Stratus, Snooki & John Morrison for the win in this one. The babyfaces are ready to show Lay-Cool and Dolph what’s coming to them. I believe that WrestleMania is the right time and the place to get retribution for past wrongs which Lay-Cool and Dolph Ziggler have definitely done to the Brunette Mafia.

Cryssi: This match is either going to be brilliant or it’s going to be a hot mess. I’m totally stoked to see Snooki try and wrestle but I hope her action is limited. I foresee Morrison and Ziggler kicking things off with Michelle and Trish taking over. This is where things will break down, hijinks will ensue, and Vickie will somehow get involved. Layla and Snooki will end up in the ring together and Snooki will pull Stratusfaction out of her you-know-what to pick up the win for the Brunette Mafia. I’m totally Team Lay-Cool/Hottest Man Alive but Trish Stratus, Snooki & John Morrison will get the photo op of a lifetime.

David: Well this certainly isn’t the WrestleMania match I thought we’d get. Remember all those months speculating about Beth vs. Natalya? Or Lay-Cool vs. the Sisters of Destruction? Raise your hand if you had Lay-Cool / Dolph Ziggler vs. Trish Stratus / John Morrison / Snooki in your office pool? You had a better chance of picking Butler and VCU. So at first I was a little disappointed that Beth wasn’t booked to win the championship and that the Divas match turned into a bit of a sideshow. But then I started to enjoy this whole thing. Its fun to see Trish back in a WWE ring. I’m happy that Lay-Cool is getting a spot on the card – they deserve it. I am happy Morrison and Ziggler, two young talents, are involved in something other than another “Money in the Bank” match. And Snooki… Ah, what the hell!? She’s goofy and silly and probably doesn’t know a wristwatch from a wristlock (I think I stole that joke) but she has dragged the media right into the ring with her. This match has buzz. It’s getting press. And I’m excited to watch it. It won’t alter the course of WWE women’s wrestling history, but it will be more fun than the Divas match at WrestleMania 26. (Do you even remember that one?) In the end, Trish Stratus, Snooki & John Morrison will win, Vickie will get embarrassed, and Lay-Cool will be promising revenge. Fist pump!

Eric: In what is perhaps the most controversial ‘Mania match since the Miller Lite Girls (Miss WrestleMania became controversial post-show) fans seem to be expecting one of two things: a disaster or Snooki to impress us with her wrestling. I say, expect neither. I predict that 75% of the match is worked by the men. Trish will likely be used to take a Lay-Cool beating while Snooki is rarely used for moments of offense (knocking off ring apron, slaps). The match will end with the men wrestling outside. Trish takes out Michelle with a chick kick and Snooki hits a Snookifaction on Layla to win. Post-match will see some variant of Vickie humiliation. Trish Stratus, Snooki & John Morrison will win.

Erin: With its focus on celebrities and star-power, WrestleMania has alwaysbeen about the spectacle, giving fans highly memorable moments. Forthis match, I don’t think there’s any way to give them that WrestleMania spectacle than to have Lay-Cool thoroughly embarrassed by Trish and Snooki. Putting celebrities over has been a long tradition in these kinds of matches, and Lay-Cool, with how much heat they generate with their arrogance and cattiness, is a perfect foil for the celeb triumph. Snooki will, of course, play a big part in their defeat, possibly even getting the pin. Trish will certainly get her licks in, but I think, much to some Diva fans’ chagrin, Snooki will be the one to get the biggest push out of this. The men will probably do a lot of the legwork, match-wise, producing some exciting spots, but the real focus is on the ladies, and the climax of the match will depend upon Snooki’s small wrestling arsenal and Lay-Cool’s ability to get their butts kicked. Trish Stratus, Snooki & John Morrison will win this one, no doubt.

Steven: As much as I hate to admit it, there is a strong possibility that Trish Stratus, Snooki & John Morrison will take home the win at this year’s WrestleMania. I know, I know, but hear me out. WWE has garnered more publicity from this single match than they have for any other match in the past few years. I highly doubt that they would let Snooki lose in her WrestleMania debut, considering that her winning would lead to even more exposure for the company. As for the the match… Let’s just say that if Snooki shows half as much enthusiasm in the ring as she does for Long Island Iced Teas, we might be able to get through this match without a hitch.

Leave your predictions in the comments!