Sometimes making history is not always the best thing to do. This was certainly the case with WWE Mae Young Classic Competitor Princesa Sugehit, who became the first woman to lose her back at a CMLL Anniversary Show.

Princess Sugehit faced Zeuxis and clashed in a Mask vs. Mask match at CMLL’s anniversary show in a two out of three falls match.

Sugehit took the first fall, but after dominating the second, Zeuxis was the one who scored the second fall. Finally, Zeuxis caught Sugehit with a Spanish Fly to score the victory and win Princesa’s mask.

In Mexico, it is seen as a dishonor to lose one’s mask, as it is similar to losing one’s identity. This was the case with Sugehit as she was then revealed as Ernestina Sugehit Salazar Martínez. She is 37 years of age and has over 20 years of experience inside the wrestling business. 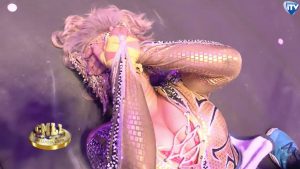 What are your thoughts? Do you reckon Sugehit can make it further in the business without her Princesa persona? Will she find a new gimmick under a new mask? Make sure to write in the comments below!