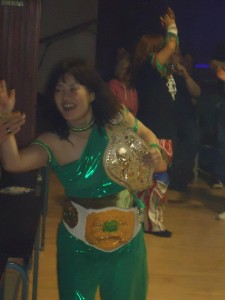 With a worldwide audience watching on IPPV, Alpha Female and Nikki Storm left it all in the ring and then some in a brutal match for Alpha’s EVE Championship. For over twenty minutes they went back and forth, in and out of the ring, with tables, chairs and even a car door, but in the end, after some lethal spots and more near-falls than you can shake a stick at, the young Scottish sensation Storm managed to knock out the German giant Alpha to take her place as the new face of women’s wrestling in Europe.

…At least, that’s what we thought. In a moment of insanity, Nikki Storm grabbed a mic and called out any of the women at the back to come out and fight her for her newly-won championship. Enter Joshi legend Emi Sakura, who had defended her JWP Openweight Title earlier in the night against Kay Lee Ray. Whether it was an adrenaline-fuelled sense of invincibility or just sheer villainous arrogance from Storm we may never know, but a few seconds and one big 450 splash later, she was left eating her words as Emi Sakura walked out with the belt. Now, as much as I love Emi Sakura and respect her as one of the greatest female wrestlers of all time, I can’t help but feel this cheapens Alpha and Storm’s magnificent effort. Still, there are far worse wrestlers that could have been involved in this swerve, and I have no doubt that Nikki Storm will get her big moment sooner rather than later (not to mention that an actual match between Storm and Sakura will be awesome), so for now EVE, you’re getting the benefit of the doubt!

In the other high-profile matches, Bete Noire and Viper won the finals of the EVE Tag Team Tournament Prelude, building up to the introduction of the EVE Tag Team Championships early next year. Noire and Viper were announced on the night as the mystery team in a three-way match including the Owens Twins and Rhia O’Reilly and Ayesha Ray, defeating them in a decent match and going on to defeat April Davids and Kaori Yoneyama (who had beaten the Blossom Twins earlier on) in an excellent match.

In what was arguably the show’s main draw to the casual fan, international superstar and former 5-time TNA Knockouts Champion Angelina Love was scheduled to have a match against the Glamour Gym’s Carmel Jacob, but after interference from Jacob’s tag partner Sara-Marie Taylor the bout was soon made a tag match between The Glamour Gym and the team of Love and Erin Angel. In the end the young Scottish team got the win in controversial fashion after spraying Angel in the eyes with hairspray. A rude welcome to British wrestling for Angelina Love!

Before she shocked EVE’s foundations to the core in the (post) main event, Emi Sakura had another fantastic match against the up-and-coming Scot (so many Scottish wrestlers on this card! Must be something in the water up there…) Kay Lee Ray, this time for Sakura’s JWP Openweight Championship. Although she didn’t quite get the win, Kay Lee Ray truly made her mark that night as one of the top rising stars in all of women’s wrestling. With talent like her in the ranks, the future of female wrestling looks bright, and it’s only a matter of time before Miss Ray is making some serious waves on the world stage.

Elsewhere on the card, Blue Nikita defeated Kirsty Love in a very physical slugfest, Lucha Britannia’s Janey Britannico defeated “Portugal’s Perfect Athlete” Shanna in a solid match, and Erin Angel did a great job pulling double duty in the show, wrestling not only in the tag match mentioned earlier but also against (another Scot!) Fiona Fraser, getting the sneaky win that time.

If we leave out the debate regarding the controversial final moments of the show, the only gripe that can be made was the technical issues that have marred so many IPPVs by so many promotions over the past few years. The show started half an hour late, which certainly didn’t help settle my nerves going into my first big task as a member of the Diva Dirt team! But as soon as the show began the stream was fine, and minus a few issues with sound at the beginning of each half, the rest of the show went without a hitch. All in all, Pro Wrestling:EVE “Wrestle-Fever” was a real testament to the great female talent that Europe (read: Scotland) has to offer, and long may it continue!