TNA Turning Point in Review: Eric Returns to ODB’s Side, But Can They Topple Hollywood’s Greatest Couple? 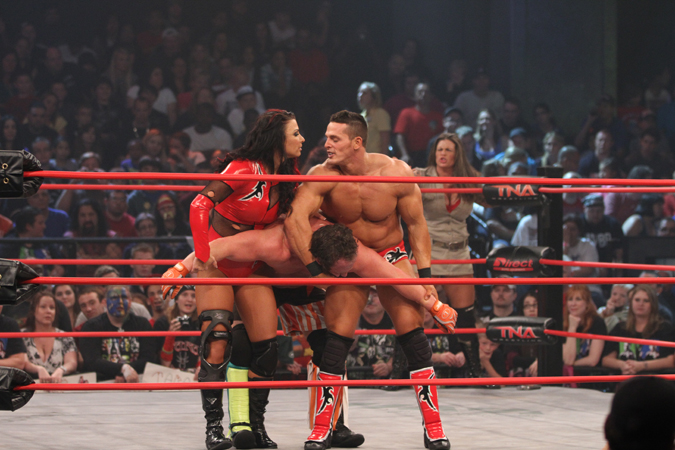 Welcome everyone to the official 2012 Turning Point recap station. It is I, your trusted loyal Impact reviewer, here to bring forth all the happenings from last night’s show. The match you ask? Tara and her boyfriend, Jesse (also known as Hollywood’s Greatest Couple or HGC for short) take on the team of ODB and (provided he shows up) Eric Young in a mixed tag team bout. Will HGC take the victory? Will ODB’s man show up and take her to a celebratory chicken dinner should they win? Will we get our second Christy Hemme pan up shot this week?! Let’s find out!

We head to the ring as Tara and Jesse, HGC, make their way out in some matching gear, while both Taryn Terrell and Christy Hemme stand in the ring. He hoists Tara up over him for a pose, but they are soon interrupted by ODB and… Eric Young who decided that Turning Point was more important than any of the previous twenty Impact’s that ODB requested he appear at. They seem to be sporting some form of unknown red belts again for some odd reason, as Taryn orders the bell to ring and we attempt to get underway with the action.

ODB and Tara begin the festivities… or so we think, as Tara goes to get a little bit of reassurance from her boyfriend Jesse. She chooses to tag him in, but that doesn’t scare ODB, who goes for a roll up and then catches him by the leg and hits an atomic drop! ODB and Eric trade shots on the Big Brother alum, before he gets smothered in ODB’s chest. Tag into Eric as the two hit a double team back elbow, following it up with a kiss pose and then another elbow. Eric with a hip toss and an arm drag for a near fall, before tagging in ODB once again as the two double team Jesse by throwing him into the corner. ODB with a bronco buster to Jesse, but now Eric wants one as well. Unfortunately for him, Tara strikes ODB down and she ends up tagging out to Eric.

He goes for Tara, which allows Jesse to attack Eric and choke him in the ropes. A back body drop for a two count by Taryn, as Tara orders her boo to tag her in. He continues to destroy EY, before tagging in Tara, who goes for a cover for a two. She flies off due to the force and tags back into Jesse. Jesse scores some elbows and then stomps on Eric’s hand, proceeding to attempt a back body drop that Eric flies out of. He rebounds off the ropes, but Jesse hits a back body drop for a two count. Jesse now targets the hand, as ODB tries to come inside but amazingly trips in the ropes. Jesse and Tara double team Eric, and for some reason now Tara is legal and Taryn is okay with this, thus so are we.

She goes for a pinfall, but Eric kicks out and Tara again goes back to tag into Jesse. Now Tara is back and the two hit a kissing posed russian leg sweep for another near fall. Now Jesse back in again to continue the destruction of ODB’s man, as he locks in a choke hold. Eric tries to fight out, as he backs Jesse into the corner and then is sent onto the ring apron and slides through Jesse’s legs. Eric with a big clothesline, as both are down now and we get a shot of ODB firing up with the liquid courage! Jesse and Tara continue to attempt double teaming, but ODB intimidates Tara out of the ring. She spins around and spits the alcohol in Jesse’s eyes, before low blowing him and then again hilariously bodyslamming Eric closer to her.

ODB gets the tag in and goes to town on Jesse, concluding with a Thesz Press. Tara now slides in and goes for ODB, but ODB takes her down as well! She goes for the BAM on Tara and hits it, but Tara slides outside and Jesse hits a shot on ODB. He drags her back inside and sends her off the ropes, allowing Eric to blind tag himself in. ODB with a bodyslam, as Eric hits an elbow drop off the top rope for the victory!

Thoughts: I actually enjoyed this match a lot more than I thought I would. I didn’t have high expectations despite the fact that I’ve been enjoying the feud between the two because I thought it would rely too much on comedy with Eric back in the mix now. But on the contrary, it had a lot of action and not really that much comedic wise. I also loved that the men and women were allowed to mix it up together and not just with their respected genders, and also how Tara kept tagging in just to go for the pin on Eric and then tagging out when he would kick out of it. It wasn’t flips every ten seconds or anything, but I don’t think anyone expected or anticipated it to be. Honestly I didn’t even expect it to be as much as we got tonight in terms of length and wrestling wise. Don’t get me wrong, I know ODB, Tara, and Eric (not seen enough of Jesse to judge) are great wrestlers, but there weren’t that many shenanigans during it like I was envisioning. As I mentioned on the last Impact review, it helped to continue ODB and Tara’s feud without ending it within a month and that’s definitely a step in the right direction.

I’m not sure where we can go from here other than the eventual ODB w/ Eric vs. Tara w/ Jesse for the Knockouts Title, but I’m fine heading that way because the feud has been building up decently in terms of being something different, yet still having a purpose and a story behind it. I just hope that the men don’t take too much away from the in ring action when ODB and Tara eventually meet because tonight’s match was, in my opinion, both fun and able to be taken seriously so thumbs up!