PWI Writer Explains Why McCool Was #1 on Female 50, Reveals How This Angered Another Female Wrestler 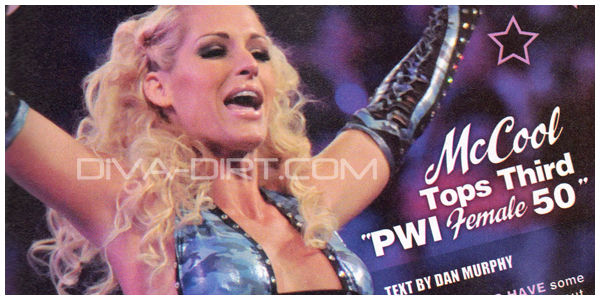 “It was definitely controversial, and we knew that going in. I had to write the article called ‘The Facts Don’t Lie: McCool Tops The Third PWI Female 50,’ and the way I started that was really saying that the critics have some negative opinions about Michelle McCool. I laid out all of the criticisms of her, and said the fact of the matter is she had been holding the title for most of the grading period or co-holding it after the Layla storyline unfolded, and had been the most consistent woman in wrestling in a major promotion over the past year. Beth Phoenix (a perennial top contender) had gone out with injury, Mickie James (who won last year and who came in #1 last year) was released and her focus shifted to music, Angelina Love was sidelined with that visa issue for about four months. A lot of the big names who you think would be up at the top had some holes. So it was Michele McCool who was the best in a relatively weak field. The big debate came down, and we thought maybe this is the year we do something a little bit different and go outside WWE or TNA and go with Mercedes Martinez or Cheerleader Melissa in the top spot, but in the end, we ended up going with McCool.”

He also explains that the decision angered another female wrestler who was inside the top five:

“I had somebody in the top five in the PWI Female 50, who when the number one choice was leaked online she was texting me immediately, and she was furious, and she was somebody in our top five who got a really good ranking, and she was so upset that Michelle McCool took the top spot. She might still be giving me the silent treatment right now, but that’s the way it goes…it happens every year.”

For the record, the #2-5 spots went to: Angelina Love, Mercedes Martinez, Cheerleader Melissa and Eve Torres. Only one of those four has been taking pot-shots at McCool online and on TV, so if my money were to be on anyone…

Right-click here and ‘Save Target As’ to download the interview.