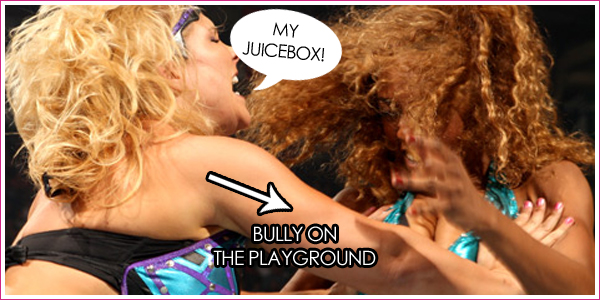 Whenever I watch wrestling, my mind begins to whir and think all these things that aren’t actually important. It’s like word vomit of the mind. But don’t worry, Desperate Housewives has taught me that in a few years I can pop my kids’ ADD pills. Only joking… kinda.

So as I watched last night’s fatal four-way, yup you guessed it, mind vomit. So I thought I’d share some of my ~random observations~ from Raw with you. Think of it as the retarded cousin of the Raw Redux, if you will.

– Why are all the videos of the match on YouTube f’d up? FML.
– That referee has been calling all the Divas matches on Raw & SmackDown for the past few weeks. He’s either very bad at his job or very lucky, can’t decide which.
– Nice to see Kelly Kelly dress the part this week.
– Either Lilian lights up a doobie before the show or she knows she’s going soon and doesn’t give a fuck anymore. ‘Alicia Keys’, really?
– I’m sorry, I must’ve changed the channel to ‘Rollupalooza’
– Alicia stepping to Beth Phoenix proves that our ‘Alicia Fierce’ nickname is in fact true. *Dusts shoulder off*
– I’m thinking Gail still watches Impact, because that crossbody was a challenge to Sarita.
– Remember when Kelly couldn’t hit the handpsring elbow?
– Anyone else feeling airsick?
– Three Diva pile-up or three weave pile-up? You decide.
– Beth Phoenix climbing the turnbuckle must have been what it felt like to see King Kong climb the Empire State Building. [Yes, I do realise King Kong is fictional]
– I do hope the bottom of Gail’s boots are clean. Wouldn’t it suck if she had a big ole piece of gum stuck on it and Foxy had to have that all up in her facial area.
– Gail’s post-win ‘prayer’ position could also be interpreted as “Thank you God for not giving me my period during a match.”
– It could also be interpreted as constipation.