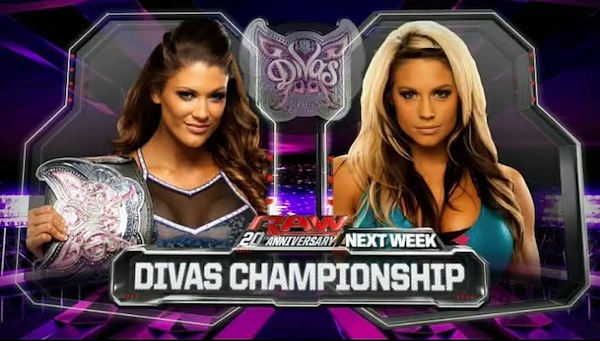 Tonight on Raw 20th anniversary episode, Eve and Kaitlyn duke it out for the Divas Championship, but who comes out on top? The Diva Dirt team weigh in…

Cryssi: Well this one is tricky. Stars either get humiliated in their home town or they have a career defining moment, and I’m not sure what route they’re going to go with Kaitlyn. I’m also not sure if I’m ready to see Eve’s title reign end just yet. I feel like the latter is just beginning to sink her teeth into this beautiful role she’s been given and that Kaitlyn is one key win away from breaking out. It’s such a fifty/fifty for me. My gut tells me that both women have an equal chance at winning tonight so when it comes to picking one or the other I’m not sure what to do. Does the WWE care enough to let Kaitlyn have a moment? I’m not sure. I think I’m going to stick with Eve Torres winning this one going into WrestleMania season, but I’m not going to be upset if I’m wrong.

Erin: The rumors about Eve leaving caught me totally off guard, but if they’re true, I absolutely see her passing the torch/title to Kaitlyn tonight. In my mind I was picturing a Kaitlyn/AJ feud leading up to WrestleMania anyways, so it would make sense for Kaitlyn to become Divas Champion at this point, even if Eve is sticking around. Kaitlyn for the win.

Jack: As noted in my Raw Redux last week, Kaitlyn has this one in the bag for me. Whilst no stipulation has been announced as of the time of writing, I would like to see one, even if it is a lumberjill match, as that will still tie in with Eve being DQ’d and counted out in recent weeks. Also, I’m gunning for Kaitlyn even more after seeing her new promo graphic that was used to promote this match. Wowzers!

Katelyn: I very much enjoy Eve’s heel character and I think she’s the perfect representative for the Divas division. She has been going to absolutely any lengths to keep her title and she could very well try the same again at the 20th Anniversary. If they ended up slapping a stipulation on this match (no count-outs, no disqualifications or something along those lines) she’d have nowhere to run or hide. This time though, I think Kaitlyn (awesome name, by the way) will have her number and go on to claim her first Divas Championship. The fact that it’s in her hometown will only make her moment that much sweeter.

Melanie: After all the teasing, it seems like tonight is Kaitlyn’s night and where better than her hometown? Personally, I’d rather see Eve retain here, but there is more for Kaitlyn to do as champion at this point with heels like AJ Lee and Tamina Snuka. Kaitlyn wins.