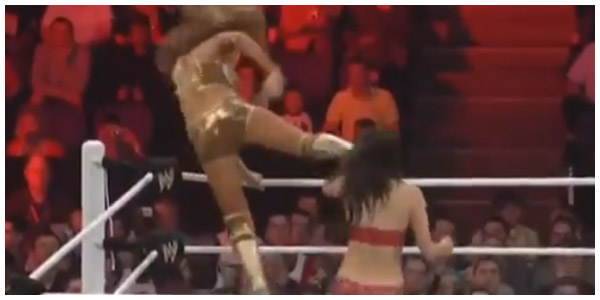 After losing her Divas Championship to Brie Bella last week, Eve Torres is looking to get back on the winning track. Who’s her first target, you ask? None other than the twin sister of the new champ, Nikki Bella. Can Eve redeem herself by taking out Nikki or will she chalk up another loss? Check out the match below:

Out first is the former champion, Eve, decked out in gold. Not to nitpick, but seems to have loss some of that spark and fire she had last week in that backstage segment. I would have liked for her to come out with a bit more attitude, considering the shady way she lost her title. Then again, that’s WWE for you.

Out next is Nikki Bella, accompanied by her sister Brie and apparently they have something to say. Brie says how much she’s looking forward to their rematch, but it might never happen because of the draft. First of all, that “promo” felt really forced and shoehorned in. The only explanation I can think of is that one of these three women will be getting drafted next week. Mark my words.

Second, I’d just like to point out the fact that just a few pay-per-views ago, the Divas Championship changed hands in a cross-branded match. Just saying…

Anyhoo… Now that we’ve gotten all that logic out of that way, let’s get into our Divas match for the night, shall we? The referee signals for the bell and our match is underway.

Nikki wastes no times going after Eve with a clothesline, but Eve evades and follows with a forearm and a kick, sending Nikki down to the mat. Eve tries to finish Nikki off with a senton, but Nikki rolls out of the way. Luckily, Eve switches things up mid-air and lands on her feet and takes Nikki over with a deep armdrag. Impressive.

Eve bars Nikki’s arm and pulls her to her feet, but Nikki fights out of the submission with a few forearms. Before Nikki can get the upper hand over the #1 contender, Eve takes her out with a kick and ties her up in the ‘Tree of Woe’. Eve tries to follow up with a baseball, but Nikki pulls herself up and out of the way. Nikki goes after Eve again, prompting the referee to get involved. While the official is distracted, Brie takes the opportunity to slam Eve’s leg against the apron.

With the damage done by her sister, Nikki goes on the attack with several stomps and goes for the pin, getting only a two-count. Frustrated, Nikki locks in a modified abdominal stretch submission, looking to make Eve tap out. Eve fights to her feet, only to get grounded once again by a knee strike/hair pull combination. Nikki tries to bash Eve’s face in with a double knee drop, but Eve rolls away to safety.

Before Eve can even get back to a vertical base, Nikki grabs her by the hair and throws her into the corner and rushes after her. Eve sees her coming and hits her with a elbow strike followed by a jumping kick off of the ropes. While Nikki tries to get her bearings, Eve quickly rolls her up and scores the pinfall.

Honestly speaking, I enjoyed this match WAY more than I enjoyed the title match last week, which is a damn shame. I thought Eve and Nikki shared a chemistry, that Brie just didn’t have last week. After this match, I’d like to see more of Nikki vs Eve. Not to take anything away from Brie as a champion, but I was really impressed with Nikki.

As I mentioned earlier, I was kind of upset that Eve dropped that sassy attitude she had last week. Last week in that backstage segment, I was more interested in Eve than I’ve been in ages. Hopefully, after the draft sassy Eve will make a reappearance.

All in all, I enjoyed this week’s Divas’ action. That said, I’m really excited to see how the impending draft shakes things up. In my opinion, both Raw and Smackdown’s Diva’s division have become really stagnant and they really need an overhaul. Hopefully, WWE doesn’t give all the draft picks to the JTGs and the Primos of the roster.

Also on this week’s editions of Raw, we had a brand new Awesome Kong… excuse me. A brand new ‘Kharma‘ vignette, where she violated yet another Bratz doll. Check it out:

Is it just me, or do these dolls represent specific Divas? Hmmmmmm…. I’m just saying, that split position the second dolls was in looks really familiar. (Hey Melina!) In any case, these vignettes are getting me really excited for Kharma’s debut.

In closing, solid night for the Divas. Hopefully, once the draft takes place and Kharma debuts, we can get a even better quality show on Monday nights.