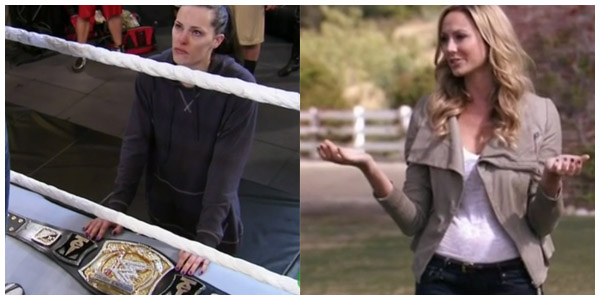 Let’s face it: Former ‘Top Model’ star, Michelle Deighton, wasn’t long for the WWE world and I had my suspicions she’d be the next female to go, but I didn’t see this coming. Instead of being cut, Michelle pulled herself out of the competition, citing that she missed her daughter and wanted to go home and be a mom. Well, despite not warming to her in the first two weeks, Michelle totally won over my respect for her decision.

That wasn’t all, folks! As well as Michelle, our douche-canoe of the season, Michael with a K, packed his bags and headed back to Jersey where he apparently has nothing to go back to… you know, except a small thing like a wife. She must feel so loved and appreciated.

Let us watch this week’s show back and dissect!

First challenge of the day is a run through a grueling trail. Ironically, the task is set by Bill DeMott. Easier said than done, right Bill? I’d love to see him try the run too… PS: I don’t know about you guys but nothing motivates me more than a huge burly guy breaking into my house and screaming at me. He’s lucky that the girls were fully-clothed or he’d have a sexual harassment lawsuit on his hands!

Pretty Boy Luke explains that he has the will to outlast his competitors. Well Luke, I’m just impressed that you know what the word ‘endurance’ means. Big word!

“Running is definitely not my strong point…” Yes Michelle, we can see that from the fact you look like you’re about to collapse. Oy vey.

Miss USA is the first of the girls to finish the run — even beating out douchey Michael with a K. That must be a blow to his ego. Go Rima! Very impressive.

The next day at training, Michelle’s solemn mood continues as she looks two seconds away from having a Kelly Bensimon-style breakdown. Really, what I’d give for #TrainerTrish to scream ‘GO TO SLEEP!’ *Sigh*

After a call home, Michelle makes the difficult decision to quit the competition. In perhaps the most emotional moment of the series thus far, Michelle has a heart-to-heart with Stone Cold before making her exit. All jokes aside, this definitely put the ‘reality’ in reality show; it was a pretty touching scene. WWE may be ridiculed in the mainstream (as hard as they try to be accepted), and this may be a show about WWE, but that scene is what reality shows are all about — seeing people’s stories. I liked this emotional scene juxtaposed with the fact that this show is pretty much about people beating each other up.

Next up, Trainer Trish leads a cheerleading challenge — yes, cheerleading! — which is designed to help the contestants be athletic and perform at the same time. Okay, fair enough. Sounds fun. But please — for the love of all that is holy — PLEASE never let Jeremiah speak again. Gross.

Anyway, cue Kid Rock — she’s got legs and she knows just how to use ’em! It’s only Stacy Keibler! Stacy, a former Baltimore Ravens cheerleader, helps out Rima with her flying (that’s cheerleader speak for throwing yourself in the air and hoping that you don’t fall splat on the ground).

Later, the contestants have to show off what they’ve learned and yup, you guessed it, Rima can’t stay balanced. Well, I don’t blame her.

Perhaps realising she’s in deep doo-doo again, Miss USA asks Bill for some one-on-one time to learn some moves. And no, that’s not a euphemism (I hope).

After failing to impress with her technique in the skills challenge, Rima once again is in the bottom three along with Skidmarks and douchebag Michael with a K. Rima explains that she’s taken the initiative for some extra training with Bill and Booker and this saves her from the cut.

The world rejoices as Michael with a K is cut. It’s an Easter miracle! Thank you, Jesus.

So how did Tough Enough measure up this week? Much better than last week and I pretty much fist-pumped at the elimination. I liked the emotional scene with Michelle and again, despite not warming to her, I think she won me over with her decision to bow out.

Rima is continuing to impress me. She may not have the moves down, but then again, she has no prior training. I think it was wise of her to reach out to Bill as we saw in this episode. She seems to have the will and desire to continue. Going into this show, people had preconceived notions about her being a prissy, don’t want to break a nail Miss USA pageant queen, but she’s holding her own. And look at it this way: If you had to pick who you thought would be the ‘quitter’ out of the five girls, most would peg Rima, not Michelle.

Once again, however, so little focus on Ivelisse and Christina. I feel like we should have seen them get more camera time by now… it’s week three, for chrissakes! They seem to be getting the Gail Kim treatment, sadly and as a viewer, I’m getting a little tired.

Why do you think Ivelisse and Christina keep getting the shaft? Did Michelle do the right thing? Are you holding a Michael with a K exit party? Tell us in the comments!