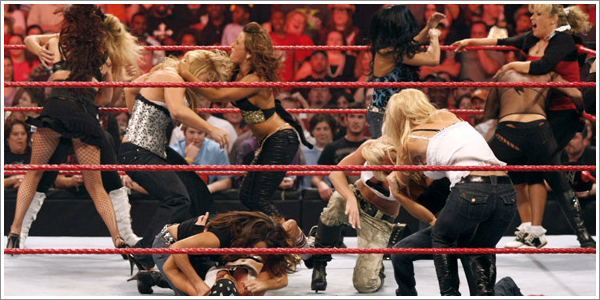 We’re ripping a page out of PWInsider’s book today, with our very own look at last night’s edition of RAW. However, we won’t be looking at the whole show, rather the Divas segment! So we welcome you to RAW Redux!

Thoughts & Reactions
Wow, I was really impressed at how WWE utilised what was essentially a filler segment and made it meaningful! It’s been a long, long time since the Divas have been involved in a promo (the last time I can remember was the days of Trish and Lita), and this was one of the best things they’ve done on RAW since then. Sure it wasn’t a match, but this segment achieved much more than just throwing all the girls in the ring for a tag match or worse – a battle royal. It told a story, better than just a match could, WWE has really been down in the dumps with Diva booking on RAW over the past year with illogical decisions. Wherever this one is going (a 12 Diva tag match at Backlash?), it started out strong. Having Maria and co. come out to congratulate Mickie was a nice touch, adding to the prestige of the Women’s Championship (finally!) and of course, led onto the heel Divas hitting the ring. I loved the two rival Diva gangs, the entrance of Team Phoenix had me popping, anyway!

Golly gosh… Beth Phoenix has gotten her voice back! For a while there, we worried whether she had become a mute. Beth oozed charisma and confidence on the microphone, if you ask me, had WWE let her cut more promos when she was Champion maybe her reign would have been more enjoyable? I wasn’t checking for Beth to get a rematch with Mickie at Backlash, as I’ve found their previous matches boring but by adding a story to it, actually I may be a little more inclined to see another Beth-Mickie match somewhere down the line. Beth showed more personality and charisma than she did in her entire title run. The problem was, with Beth being this wrecking machine with no story to it, not letting her cut promos etc. it made her dull. Please keep it up, WWE!

Of the “supporting cast”, they did a pretty good job by establishing Michelle McCool in this segment also. Michelle has been growing on me of late and it’s only now that I see her as a true top level Diva, although it’s not hard when your face counterparts (Mickie excluded) are Ashley and Kelly Kelly. Michelle in my eyes, is second only to Mickie James at the moment on the face side. RAW isn’t Michelle’s brand, but Creative sort of gave us a little bit extra for our money – having Michelle, SmackDown!’s top Diva, come off strong in this segment also. They didn’t need to do that, but by doing so they’re acknowledging that “Hey, SmackDown! is growing a pretty impressive women’s division too” and opening up the doors, not restricting the women’s division simply to RAW.

What I don’t agree with and what I find laughable, is having the face Divas clear house of the likes of Beth Phoenix, Melina, Victoria, Jillian and Natalya – all of whom could pummel most of their asses in a heartbeat. It wasn’t realistic, but obviously WWE is going for the big face pop here.

Ashley: I will refrain from commenting on Ashley’s choice of attire in this portion, which leaves me with not much else to say. Actually… lol as well as botching moves, Ashley has trouble getting her words out too.

Beth Phoenix: As said above, Beth really showed personality and poise on the microphone. She knows how to cut a promo, but will WWE let her in future weeks?

Cherry: Not much to say here. Cherry could be the number three of Team Mickie (after Mickie and Michelle) when it comes to in-ring action should this segment come to a match. Given the rest of the team are pretty much duds, she could surprise us.

Jillian: There isn’t much to say, but I think it would’ve been wise to have Jillian and/or Melina speak up too (like Michelle), to certify them as Beth’s number 1 and 2.

Layla: Boy, did Layla look like the odd one out on her team or what? We admire her personality and the persona she’s made for herself, but she seemed a little out of her depth with the experienced wrestlers she walked out with.

Maria: Maria, Maria, she’s trying to transition to a serious wrestler but when WWE is putting over a SmackDown! Diva over you on your show, it says a lot. Speaking of SmackDown!, come the draft – send her there.

Melina: Like Jillian, it would’ve been effective if Melina had spoken out, considering she’s the best Diva on the mic. They could have easily had her stand up to Michelle while Beth and Mickie locked horns.

Michelle: Michelle’s rise continues, booking her standing up to the former Women’s Champion (something Mickie was barely able to do), says a lot about how WWE feels about Michelle.

Mickie: During her promo, did anyone else feel she was just one tear away from her old psycho mode? It would’ve been a sight if she decimated all the face Divas.

Natalya: This was Natalya’s first RAW outing, but given that she’s new and yet to develop her own character (and feud) it seems odd to throw her into the mix of another feud.

Victoria: I didn’t see much of Victoria in this segment, but when push comes to shove, Victoria most certainly can deliver the goods. Meaning she’ll be the MVP of her team in a match.

Fashion Focus
The Good: This week I gotta give props to two Divas who usually fall on the wrong side of my fashion radar – Beth Phoenix and Mickie James. Wowww, Beth looked freakin’ phenomenal on RAW, I’ve never noticed before but Beth really has a beautiful face, she looked more feminine than ever before. Both Beth and Mickie went for the casual-yet-elegant look and perfected it this week, they really looked hot! Another Diva who’s cropping up on the best dressed list for me lately is Michelle McCool. Who knew a small town girl with a hick accent (no offence) could dress so fashionably? She looked awesome! As always, Layla looked gorgeous too.

The Bad: Between Maria, Ashley and Kelly it’s hard to decide who looked the worst. I see Maria’s still insisting on designing and wearing her “Tacky by Maria” clothing line. Ashley dressed like a prebuscent boy and Kelly, well Kelly is just “special.”

The In-Between: Usually fashion forward, Melina hardly set the world alight on RAW. Neither did Jillian, Victoria, Natalya or Cherry.

What did you think of last night’s Diva segment? Comment and be heard!