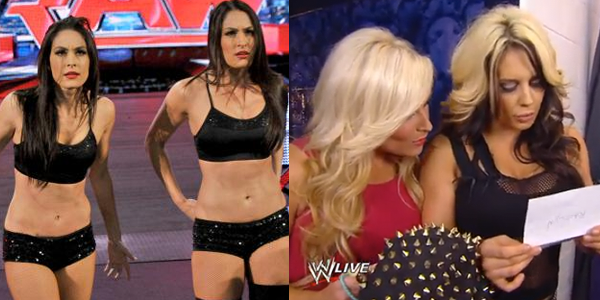 G’day moites! In honor of our very own Katelyn, I’m presenting you with a very Australian Raw Redux today. And by Australian, I mean just this first sentence. Last week from merry ole England, we were given a number one contender for the Diva’s Championship, in the form of AJ Lee. And this week we actually got continuation in that storyline in one of the most fantastic ways possible. We also got some promotion for the new Diva’s reality show coming up this summer, a singles match between Brie Bella and Naomi, and appearances by Natalya and Fandango’s new permanent dancer, Summer Rae. Lets take a look at how it all panned out.

For the life of me, I don’t know why they keep trying twin magic but at least the Bella twins have finally started getting caught.

I like the fact this match basically kicked off with a backstage segment that set up everything. Brie and Nikki Bella were exuding arrogance, like usual, and I love them as heels. I really don’t understand why people continue to harp on the fact they can’t act. Show me one girl on the roster who is capable of winning an Oscar or Emmy and please make a good argument for said girl so I don’t sit here and laugh hysterically at your opinion. When Naomi and Cameron came out to the ring, I couldn’t help but notice how fantastic they looked. Pink totally works for both of them.

What I didn’t like was the actual match itself. I still don’t understand why we have twin magic, but whatevs. With the talent that Brie and Naomi both have when it comes to wrestling, it really is a shame they didn’t give them more time. Nothing really stood out to me other than the ending, and even that was just kind of blah. But, the aftermath of the match was nice. I loved the attack on Naomi and Cameron by the Bellas, and how they kind of singled out Cameron, since she was the one who told on them. It definitely bodes well for all four of them that this feud hasn’t been forgotten and I think with them starring in the new reality show, we’re going to be seeing even more of them. I have no qualms with that at all.

Overall, the match itself was a letdown, but given the aftermath it was probably supposed to be that way. The beatdown was more of the story, and it left us with a chance to have storyline continuation.

It was also nice to have continuation with Kaitlyn and AJ. In fact, that was probably even more nice than the match since Kaitlyn is the champ and all.

The best thing about Kaitlyn having an admirer is that it gives us endless possibilities about who this secret admirer could be. I like this angle a lot. I threw it out on Twitter last night and some of the suggestions were Big E. Langston, Saint Tyler (my suggestion because nothing says true love like sharing the same hair style), Audrey Marie (a rehash of a FCW storyline I believe), the hotness that is Prince Brunette Dawlf a.ka. Briley Pierce, and perhaps my favorite suggestion, AJ herself. Why I like AJ is because it’s a great mind game for her to play. The secret admirer thing could be her way of trying to throw Kaitlyn off her game in preperation for their title match that I’m going to assume will take place at Extreme Rules.

They certainly have the history and if anyone knows what type of girl Kaitlyn is, it would be her ex-BFF, AJ. It’s definitely a great idea and I’ll be curious to see if the WWE runs with something like that. Personally, I’d like for it to be Saint Tyler because more than anything else, I just love being right. I’m intrigued by this storyline and I’m looking forward to seeing how it progresses.

I will say this, I’m totally with Nattie. That hat was UGLY!

That wasn’t the only time we saw Nattie, either. The third-generation Diva made an appearance later that night alongside her whatever, The Great Khali.

Well, you folks can judge this for yourself. I still hate they’re wasting Summer Rae in this role, and she still looks awkward.

That’s all I’ve got for y’all today. Enjoy the rest of your Tuesday. Until next time… Cryssi out!