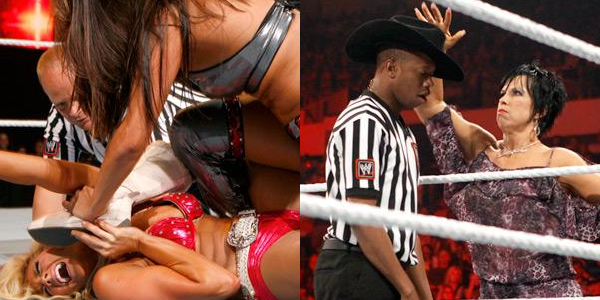 What a fantastic 48 hours for the WWE as a whole, as well as the Divas. A lot of us doubted that the ‘E could keep their momentum after Money in the Bank, but they’ve certainly proven me wrong, and I hope all of you as well. SummerSlam provided us with the return of the top you-know-what to ever grace the squared circle, Mrs. Stephanie McMahon. And it also gave us a shocking Kelly Kelly victory over Beth Phoenix in one of the most beautiful ways possible. Raw had a lot to live up to and it absolutely smashed a home run right over the center field wall. Kelly teamed up with her BFF Eve Torres to take on Brie and Nikki Bella. The Divas of Doom, Beth and Natalya, made their presence felt in two drop-dead flawless outfits, Stephanie continued to baffle all of us, and Vickie Guerrero, the reigning Queen of Fierce, could have very well stolen the show last night. Let’s hurry up and get on with the action!

The first thing we’re going to get into is the tag match. I can admit that I totally popped for the Bella Twins (in their DB colors no less…) when they came out as I wasn’t expecting to see them. After all four ladies are in the ring, the Divas get into the usual trash talking. Kelly parades her championship in the twins’ faces, and finally it’s decided that Kelly and Brie will start the match off. 2K follows up her victory from last night with some impressive offense in the early stages of the match. She ends up getting Brie in the corner after hitting a sweet looking bulldog, and then she delivers a stinkface to her brunette opponent. Nikki walks over and provides a distraction which gives Brie a chance to strike Kelly from behind. The champ goes down, and Brie begins to work over Kelly’s leg. Brie pulls her to the corner, where she tags in Nikki, and the older Bella hurts Kelly just a little more. Nikki tags her sister right back in and that gives Brie a chance to mimic Nikki’s motions. They’ve got Kelly grounded. The merry-go-round of tags continue with Nikki coming into the match for good now and the work on Kelly’s hurt limb continues with a sick looking submission type of hold. Kelly is actually folded into a wicked looking triangle. That’s just not normal. Kelly, to her credit, is able to kick Nikki away with her good leg and she crawls over to her corner and makes the tag to Eve.

The ex-Divas Champ gets involved now and she takes control over Nikki. Not even a distraction from Brie can stop Eve from changing the course of the match. Nikki attempts to lift Eve up for a powerslam, but Eve wiggles out of it and lays Nikki out with a backwards neckbreaker (yes, I still give wrestling moves their own names, haha). Brie tries to come in to help, but Kelly is all over that. She takes Brie down which gives Eve an opportunity to go to the top rope and hit a moonsault on Nikki. She goes for the cover and that’s all she wrote, folks. The team of Kelly and Eve pick up a big win. They celebrate in style but that celebration is cut short when the Divas of Doom make their way out onto the stage. Beth and Natalya sarcastically applaud the victory of Kelly and Eve, and from there it’s just an intense stare-down. Love it.

First of all, how amazing did Beth and Nattie look?! OMG, wow. Beth’s whole look from last night needs to get into my closet right now and Nattie, well she always brings the fierce. We know she’s a little fashionista with her Louis Vuitton and Louboutin tweets so you just keep on keeping on girl. The Divas of Doom make me happy because as great of a face tag team as they were, Beth and Natalya are amazing at being heels. I truly hope these two stay together through thick and thin and perhaps when Kharma makes her return, they can all be a sick and twisted stable and continue to raise hell in the Divas division. Then and only then can they all turn on each other and give us an epic triple threat match at WrestleMania 29… but again, I’m getting way ahead of myself.

The Divas had another good match. The Bella Twins always impress me and I love the way they told a story in this match. They picked apart one body part and stayed with it, and that’s great. Kelly is proving that when given a little extra time she can pull out new moves, and I love her for it. Eve getting the pin was an interesting surprise and I’m excited to see where this is going.

And speaking of exciting, Vickie was given an interesting proposal by a former World Heavyweight Champion.

What sets up the backstage segment you’ve just watch is the fact Vickie and her main man, Dolph Ziggler (my man, haha), came to ringside to do commentary for the Alex Riley and Jack Swagger match. The couple spent the majority of the time bickering between themselves with Dolph putting the announcers in their place everytime they tried to diss Vickie and her appearance. Dolph and Vickie were great, as usual, but eventually Vickie grew tired of it and she left the broadcast booth.

But she didn’t go far.

Vickie took good ole J.R.’s hat and put it on her head. She strutted around in it for a little while, getting everyone to look at her. When Riley was in good shape to win the match, Vickie provided a hilarious distraction. She jumped on the apron and put the hat on the referee and that allowed Swagger to recover. To failed gut-wrench powerbombs later, Mr. I Couldn’t Unhook The Money in the Bank Briefcase on the Grandest Stage of Them All got a much needed win. And no, I’ll never let that go, ever. Vickie seemed pleased with herself and the greatest thing of all, Dolph had to sit there and watch his woman help another man win a match. Vickie is soooo vicious.

As far as the backstage segment goes, a Vickie and Swagger union would be epic. Vickie clearly loves her blonds and Swagger, despite his little fails (MiTB, ahem) is super talented. He’s being wasted on Raw and getting involved with Vickie would be amazing for him. I’ve never understood why the art of managing has died out, but having Vickie help bring the movement back is great. Managers can absolutely have more than one client and I’d love to see the two men fight over Vickie and have an eventual feud. The idea of a Dolph/Swagger match makes my mouth water and if you throw A-Ry into that mix, oh baby. Lets make this happen at Night of Champions.

And the greatness didn’t stop there. Stephanie, who shocked us all with her return at SummerSlam, showed up on Raw and she had yet another little segment with Diva Dirt favorite, CM Punk.

The 37 seconds of awesomeness left all of us with more questions than answers and honestly, I’m okay with that. I would love to sit here and speculate all day about what Stephanie meant when she told Punk that people always get what they deserve. In fact, we talked about it a lot on DD Live last night. I don’t know where this storyline is going. And I have no idea what it means. But what I know is that I love having Stephanie back on television. It’s where she belongs because until Vickie came along, no one could get a reaction quite like Stephanie. And a cryptic Stephanie is the absolute best Steph of all.

Again, I love great Raws. I’ll be truly shocked if SmackDown is able to top what we saw tonight. Good luck to them and I’ll see you guys next week! Until then… Cryssi out!