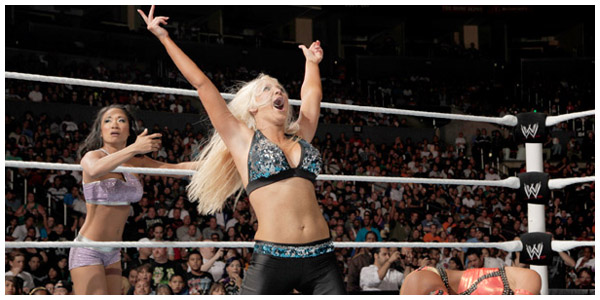 As we all know, Melina picked up a huge win last Sunday at SummerSlam over Alicia Fox to win the Divas Championship, but her moment was ruined by the BFF champs, Lay-Cool. Will Melina get her revenge on the Flawless Ones? Will Alicia get a chance to redeem herself and win back the Divas Title? Will Melina come to the ring as a Vegas showgirl again? No. None of that happens. Instead we get a 6 Diva tag match pitting the team of Melina, Gail Kim and Eve Torres against Alicia Fox, Maryse and Jillian. Check out the match below:

Out first are the babyfaces and I must say, they look like a rag-tag group of super heroines. but I like it for some reason. Next, we have the heels, led to the ring by Alicia, who gets right in Melina’s face. This lead to a bit of a scuffle between the two teams. The referee finally gets control of the situation and signals for the opening bell.

Gail and Maryse start the match off for their respective teams. In her usual arrogant manner, Maryse shoves Gail, before narrowly dogding a bitchslap to the face. Maryse charge but is quickly taken down by a drop toe hold. Gail follows up by slamming Maryse’s face into the canvas repeatedly. Maryse tries to get back into the game by reversing an Irish Whip but Gail using the ropes to hit a springboard crossbody. Gail ties Maryse up it the Tree of Woe and tags in the Divas champion, Melina. Gail grabs the still incapacitated Maryse by the hair and Melina leapfrogs over her partner, coming down hard on Maryse’s mid-section.

Melina tries to the heat on her opponent, but Maryse manages to power the champion into enemy territory. As the referee chastised Maryse, Jillian and Alicia (Ummm, I thought they weren’t friends anymore. Frenemies, perhaps?) attack Melina in the corner. Melina fight them off but is laid out by Maryse’ French TKO for a near fall. A frustrated Maryse tagged in the former champ, Alicia Fox.

Fox goes on the attack immediately with a beautiful Northern Lights Suplex for two. Before the champ can gather herself, Alicia hits a snapmare before driving her knee into Melina’s back for a submission. Melina fights out with a Jawjacker and both Divas tag out, bringing in Eve and Jillian.

Eve burst out the gate swinging, hitting a few dropkicks and a scoopslam, before busting out her running senton splash. It looks like Eve may have this in the bag, but the pin is broken up by Alicia, who subsequently taken out by Melina. Maryse tries to take advantage of the confusion and hit Eve with her French Kiss, but the ‘Sexiest of the Sexy’ is leveled by a flying clothesline, courtesy of Gail Kim.

Jillian whips the still dazed Eve across the ring but is met by an elbow and a kick to the head for her trouble. Eve goes to finish Jillian off with her moonsault, but Jillian is back on her feet and snatches Eve off the top rope with a school boy/powerbomb combo for the win, making this her first win since defeating Mickie James in October of last year. I can honestly say this is the most shocking twist that has happened in the last six months, in regards to the Divas.

While I’m happy for Jillian finally winning a match and all, what happened to the Lay-Cool/Melina altercation. Aside from recapping it prior to the match, it wasnt referred to at all. Also, what happened to Alicia’s rematch? And I thought Jillian and Alicia were enemies now. There was just so many holes in this story, as I mentioned on last night Post-Show. Why can’t we just follow through with a storyline for once, instead of introducing all these random ass angles.

When it comes to the in-ring action, I was satisfied. All the Divas got to have their moment and the moves were on point for the most part. It seems WWE is getting better at these multi-Diva tag matches, because the last couple have been pretty entertaining in comparison to what we’ve seen in the past.

If you listened to last night’s Post-Show, you know exactly how next week’s Divas action is gonna go down, so I won’t get into what i think will happen next week However, what I will say is the Diva division on both Raw and SmackDown are in desperate need of direction. All the twists and turns between SummerSlam and next week’s Raw are a prime examples that creative has no idea what to do with these girls. Hopefully, in the coming weeks this Melina/Lay-Cool/Jillian angle starts to make sense.