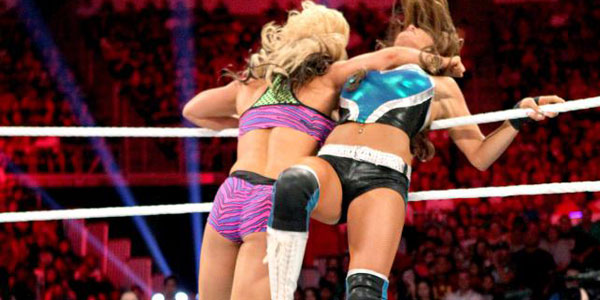 Hello little medonsters (if ANYONE gets that reference, I will personally reward you with cake), and welcome to this week’s Raw Redux! We had quite a night of action on Raw last night, as Kaitlyn, Tamina, Rosa Mendes (welcome back!), Aksana, Natalya, Eve Torres, and Alicia Fox compete in a battle royal to determine Layla‘s next contender for the Divas Title. Strangely enough, Beth Phoenix and Kelly Kelly (despite being promoted as being in the match two minutes prior) do not show up. I guess we are to assume their eliminations occurred during the commercial break before the bell rang like Layla at WrestleMania 25. Nonetheless, in addition to that, we get a lot of AJ Lee as she proceeds to make decisions and skip (Wow, I actually just typed ship… too much dream coupling going on through my Twitter feed has caused my hands to conform to society.) Without further ado, let’s get underway!

We return to the ring as the sound of my own personal national anthem that is AJ’s old theme song plays in the background. (Side note: Has anyone else ever gotten the feeling that it’s sung by Angelica Pickles of Rugrats fame… or is it just me??) Layla holds her title up as the bell sounds and the Divas immediately go after one another. Tamina takes Fox down with a clothesline, as our wonderful Costa Rican hops on the Samoan Goddess’ back and begins outlandishly screaming in terror as Tamina backs them up to the ropes. Well we’re already five seconds in and Rosa hasn’t been eliminated (by someone else or herself) so this is a step in the right direction! Tamina slams Rosa down as Aksana now drops Mendes by the hair and turns on Tamina. Rosa with a Thesz press as she and Aksana basically catfight right out of the ring!

Kaitlyn, Eve, Fox, Tamina, and Natalya continue the fight inside the ring, as Tamina takes Alicia down with a headbutt around the match time that most battle royals usually have a winner by. Natalya tries to take Kaitlyn out, and Tamina joins up! Kaitlyn is on the ring apron, but fights out and is dragged back in the ring. A nice double suplex by the two, before Alicia Fox tries to take the generation Divas down. They attempt to double team her, but she fights out. The two go for another double suplex, only this time trying to send her outside the ring! Foxy flails around until she escapes, before kicking both Natalya and Tamina out… or so we think! Both hang on, as Alicia tries to kick Tamina out. Nattie stops it, and drags her into the corner where she proceeds to demolish her. Natalya and Tamina go for a double team move which consists of Snuka Irish Whipping Neidhart into the corner, but Alicia hops up to the top rope in a split fashion which sparks Natalya to fly right outside the ring and eliminate herself!

Back inside the ring, Tamina DRILLS Alicia with a huge superkick that sends her flying as well, before Snuka is ultimately eliminated by Kaitlyn. We’re now down to Kaitlyn and Eve, as Torres hoists Kaitlyn onto her shoulders and tries to toss her out. Kaitlyn fights out and after a failed attempt, clotheslines Eve outside the ring! Kaitlyn wins! Layla stares off with her new top contender, as I begin to celebrate the fact that FCW/NXT star, Brad Maddox raises her hand in victory. Layla applauds Kaitlyn’s win, as the two exchange stares until Kaitlyn decides that she will celebrate with us!

Now we delve into our weekly dose of General Manager, AJ Lee!

We head backstage to see Matt Striker standing by with our GM, AJ Lee, who is questioned on her responce to CM Punk’s touts about his upcoming contender. Suddenly, she’s interrupted by David Otunga… but with a lot less facial hair. So much so that I honestly don’t know if I would’ve known that was him had it not been for the bow tie. He shakes her hand and namedrops Halle Berry, before congratulating her on her new role as GM. Otunga offers his legal counseling to AJ if anyone calls her cr… cra… I can’t say it, but it’s that word that follows “You Drive Me” in a film starring Melissa Joan Hart. AJ does not take too kindly to hearing that word, as she twitches her head around to him and orders him to say that word again! She decides that if he wants to offer his services, it will be in the ring against an opponent of her choosing. Back to the interview, AJ claims Punk can choose the contender he wants… provided it meets her approval. Her facial expressions are gold!

Backstage, Dolph Ziggler approaches Chris Jericho and the two speak back and forth with Dolph wanting a rematch from last night. Suddenly, in skips AJ who prances around them and then decides to book a rematch… with higher stakes though! She announces that if Jericho loses, his contract is terminated, and if Dolph loses, his Money in the Bank briefcase goes to Chris! Jericho seems okay with this, but Dolph seems to want her to rethink this decision!

In the midst of an Alberto Del Rio rant, he’s interrupted by our skipping general manager, AJ! She says hola to the Latin star, and claims that she has no authority over the World Title scene since that’s a SmackDown ordeal. Miss Lee informs Alberto though, that as a consolation for dressing up in his gear and coming out to wrestle, she will put him in a match right now to help Booker in considering a World Title situation. Miss Lee proceeds to introduce Alberto to his little friend, Randy Orton!

And of course, do you really think I can just ignore Naomi and Cameron‘s new gear? Or a Damien Sandow appearance? Wrestle soon Funkadactyls, I beg of you! Reunite Damien with his old Kentucky friend, Beth Phoenix for a mixed tag!

Thoughts: Wonderful. Tremendous. Amazing. Exciting. Incredible. There are honestly not enough words to describe my thoughts on WWE finally pulling the trigger on Kaitlyn to enter a Divas title feud. Going into the match, I was personally rooting for either she or Natalya to get the win, and it’s no secret that I’ve discussed how much I enjoy watching her perform. As much as I wanted it, I truely never thought they would actually put her into a title feud… mainly because that would mean acknowledging we have a title in the first place. But wow, I’m really excited to see how she and Layla do. Kaitlyn works best with smaller, quicker opponents and while Layla isn’t as small as AJ to my knowledge, she’s still small and she’s still quick. It seems like we’re finally getting something fresh and interesting in the Divas division and I love it. Hopefully this is the start of using more of the underutilized females! Even if she doesn’t win at Night of Champions (where I’m guessing this match will take place), I really hope Kaitlyn is the one to dethrone Layla. I probably shouldn’t wish that on her because it might mean she vanishes for weeks like every champion, but dang it, I want a Kaitlyn run as Divas Champion. Also really like that they used the Booker T’s assistant feud to build Kaitlyn up a little so that this wasn’t as random as it could’ve been too!

Onto the battle royal itself, I actually really liked it. It didn’t feel short and rushed like usual, and I think we only had two eliminations in the first few minutes even. I loved how Rosa basically dragged Aksana out with her as if to say “I’m sick of being the first one out so you’re coming with me!” But wow, spot of the match had to be Tamina’s insane super kick to Alicia as she was on the top rope. Now that is a creative elimination! The match did feel like it stalled a few times though, but most battle royals usually do if they’re not meant to have everyone tossed out in the first twenty seconds. Overall though, I enjoyed it more than any of those short one minute ones, and I love that we’re seeing longer matches on Raw with the extra hour added on. Yes, it’s not ten minutes or anything, but it doesn’t need to be. I’m perfectly fine with the length we’ve been getting the past few weeks of about three or four because they don’t feel short to me, and it’s enough time to put on good showings since I’ve enjoyed Kelly/Eve, the tag from last week, and now this.

Anyone else confused by the lack of Kelly Kelly and Beth Phoenix? Especially when they were promoted in the match graphic? I don’t want to jinx anything because we all know what usually follows Diva Battle Royals on Raw… (cough: Melina, Gail, Maxine), but I do find it strange that Beth wasn’t at any of the Summerslam festivities to my knowledge either. Kelly was dancing, which makes it even weirder that she wasn’t featured tonight, but I’m sure we’ll find out reasons soon enough. I saw it on twitter last night, but maybe the new way of being eliminated from these battle royals is to just not show up at all! Hope everything is alright with both Kelly and Beth though.

All & all, I enjoyed Raw again female wise with this new three hour format. They’re getting a bit more time in the ring, which is making their segments not feel as rushed/unimportant as before. Hopefully it keeps up!