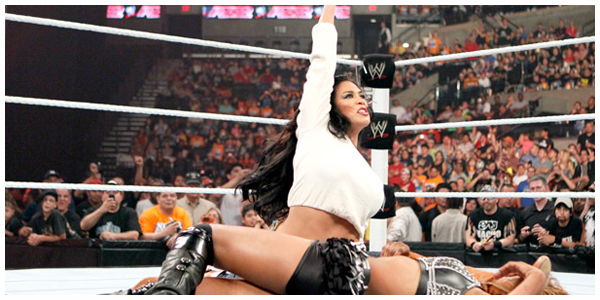 Last week, Alicia Fox managed to overcome The Bella Twins switcheroo and pull out yet another win. She even took out her buddy Jillian afterwards, proving that no one is safe from the ‘Foxy One’s’ wrath. This week, Alicia teamed up with Jillian and Tamina to face off against the team of Eve Torres, Gail Kim and Natalya with a very special appearance by a certain A-List Diva. Check out the match below:

We start off the match with the face team already in the ring, posing to the crowd. Next the heels make their way to the ring and to be honest, Jillian doesn’t look too thrilled to be teaming with Alicia after last week. More on that later. The referee rings the bell and the match is underway with Jillian and Gail kicking things off for their respective teams.

The two Divas lock up and jockey for position, with Jillian getting the upper-hand, taking Gail down with a handful of hair and laying in with some stiff right hands. The non-melodious siren follows up with a hair beel for a two count. Frustrated, Jillian pulls Gail up by the hair and drives her head into her knee repeatedly, followed by a backbreaker for another near fall. Jillian drags Gail over to her corner and takes a moment to stare down her partner Alicia before tagging her in. Guess who’s still bitter?

Alicia quickly takes the reins, nailing Gail with a solid forearm and a picture perfect Northern Lights suplex for a near fall. Alicia tries to tag Jillian in, but Jillian refuses, obviously remembering that axe kick from last week. The distraction allows Gail to get the advantage on the Divas champ with a flurry of strikes and a flapjack. Not wasting any time, Gail crawls to her corners and tags in the third generation Diva and the first lady of The Hart Dynasty, Natalya. Brace yourself, my friends; Business is about to pick up.

Alicia tries to get the one up on Natalya with a clothesline, but Natalya ducks and lays the champ out with a clothesline of her own. The pink and black attack keeps the heat on Alicia with a snap suplex followed by a low dropkick to the back. Not giving Alicia any time to breathe, Natalya scoopslams Alicia before executing a gorgeous double underhook suplex.

It looks like Natalya just might have this match won, but the pin is broken up by Tamina. Before Tamina could think about helping out her partner, Gail comes flying out of the corner with a sick dropkick, sending Tamina to the floor, prompting Jillian to try and make the save. Unfortunately for Jillian, Gail sees her coming, hits her with a kick to the midsection and uses her as a stepladder to climb the ropes and hit Tamina with a beautiful flying crossbody. While Gail is still out of sorts, Jillian takes the opportunity to snatch Gail up and whip her into the turnbuckle at top speed.

While Gail is busy picking up her teeth off the floor, Eve gets in on the action, taking Jillian out with a baseball slide to the outside. Eve tries to follow up but Tamina is back on her feet and takes the former champ out with a nasty clothesline. Meanwhile, Natalya and Alicia, who are still the legal partners, are back at it. Natalya tries to set up the Sharpshooter, but is interrupted yet again by her rival Tamina. After a little stumble, which is covered up by some really shoddy editing, Natalya bitch slaps the Samoan beauty to the mat. Natalya make the mistake of dropping to all fours to yell at Tamina, leaving herself wide open for a vicious axe kick from Alicia for the win.

After the match, Alicia decides to get on the mic and talk some smack. She lets her opponents (and partners) know that has beaten all of them. Umm, has Alicia been taking WWE history lessons from Michael Cole? Last time I checked, Alicia has never beaten Tamina or Jillian in a match, singles or otherwise. Please correct me if wrong. Alicia goes to say that there is no Diva in the WWE that is comparable to her. Needless to say, none of the other Divas are too pleased with this declaration. Before Alicia can continue her tirade, she is cut off by some very familiar music. This moment will be remembered as the night where millions of Diva fans’ heads exploded simultaneously.

Out comes the former Divas and Womens champion, Melina, back at long last from a ACL injury that had her sidelined for several months. Alicia tries to haul ass but the Divas she just trashed are surrounding the ring, making it hard for her to escape. She finally jumps out the ring, only to be attacked and thrown to the wolves by Jillian, who is obviously still pissed about last week’s attack. I bet Alicia wishes she had just let her sing the damn song.

With nowhere left to run, Alicia has no choice but to fight her way out. She goes for a clothesline but Melina dodges with the ‘matrix’ and nails the champ with an elbow. Melina then drives Alicia into the mat with a snapmare driver (Someone has been watching her SHIMMER DVDs. I approve) followed by her signature split-legged bulldog, before posing triumphantly over the fallen champ.

This week’s edition of Raw was excellent, especially in comparison to some of the nonsense they’ve been putting out in the past few weeks. Oh, let me count the ways…:

1. In ring action: All the girls seemed to be on their Ps and Qs when it came to the wrestling this week. Even those whose time in the ring was limited (i.e Eve and Tamina), made their mark on the match. The interaction between Alicia and Natalya was particularly impressive and I would love to see these two face off in a feud sometime in the future. And don’t even get me started on Gail Kim’s brutal introduction to the turnbuckle.

3. Melina’s return: The return of Melina was the highlight of the Divas action this week. To be honest, the division has been at a stand still since her departure and I’m sure her return will kick things into gear on the red brand. As mentioned on The Post-Raw Show last night, I hope WWE doesn’t push her too hard and put her right into things with Alicia. A slow and gradual progression seems like the best way to get her back into the mix. I would hate to see her pull a Candice and get injured right after her return.

There you have it. Looks like WWE can put on a decent Divas match when they apply themselves. Hopefully, they can duplicate this in the coming weeks now that Melina is back. It’ll be interesting to see whether Jillian and Alicia’s issues with each other will play a part in the budding Melina/Alicia feud. Either way, I can honestly say that I’m really looking forward to next week’s edition of Monday Night Raw.