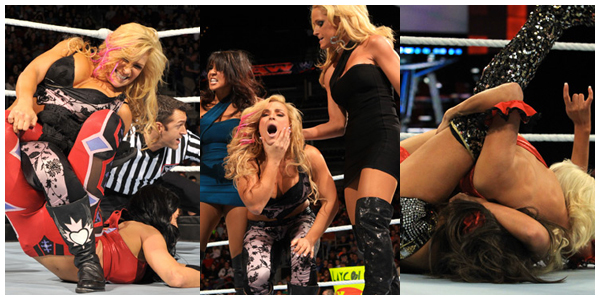 On this week’s edition of Monday Night Raw, Diva fans were treated to a double-shot of action in the form of a mixed tag match featuring Maryse and Ted DiBiase vs the team of Brie Bella and Daniel Bryan, as well as Natalya vs Melina in a non-title bout. First up, the mixed tag team match:

First out are the power couple of Maryse and Teddy, who have had a bit of tension between them in the past couple of weeks. While the million dollar couple prepare inside the ring, we cut backstage to smiling Nikki Bella, who goes to knock on Daniel Bryan’s dressing room door. However, before she can knock, the door opens and Bryan walks out with Brie Bella on his arm. Nikki asks Brie what she’s doing there and is informed that Brie volunteered to be Daniel’s partner tonight. Nikki smiles as her sister walks off with the U.S champ, but her expression quickly turns sour once they’re out of sight.

Daniel’s music hits and he makes his way to the ring with Brie by his side and a huge smile on his face (Can you blame him?). The superstars start off the match and while they’re squaring off, Nikki Bella saunters to ringside. Nothing wrong with some twin sister support right? Meanwhile, DiBiase has the upperhand but Maryse tags herself in to show him how to take care of business. Maryse goes for a clothesline, but misses and is laid out by a flurry of strikes from Brie. Brie quickly goes for the pin, but Maryse kicks out at two.

Brie tries to follow up, but Maryse punches her in the gut and execute a very…. unique version of a facebuster, seemingly hurting herself in the process. Maryse pulls Brie to her feet and goes for a right hand, but Brie dodges and rolls Maryse up with a schoolboy. DiBiase comes to the rescue, pulling Brie off of his woman but get a vicious dropkick in return from Bryan. The referee chastises Bryan, while Maryse verbally abuses him in quite a comical manner. This give The Bellas the perfect opportunity to cast some ‘twin magic’.

While the referee and Maryse are distracted, Nikki rolls Brie out of the ring and takes her place.Maryse returns her attention to who she thinks is Brie Bella and goes for the French Kiss. Nikki manages to reverse into a small package and picks up the win, while a not-so-happy Brie looks on outside.

To be honest, there was nothing particularly thrilling about the in-ring action here. It was a pretty quick and nothing really jumped out at me, from the Superstar or Divas. That said, I really loved the storyline progression here. We got some more tension between Maryse and Teddy, both during and after the match. It’ll be interesting to see if it carries over to NXT tomorrow night, where they will both be acting as pros. We will also witnessed the beginning of some tension between Brie and Nikki. Both girls obviously have Daniel Bryan in their sights, with Bryan playing the oblivious nerdy guy stuck in between. If done correctly, this could be a big storyline for both The Bellas and Daniel Bryan. I’m already curious as to what will happen in this budding love triangle.

Later on in the night, Natalya faced off with Melina in a non-title contest with Lay-Cool on commentary. Check out the match below:

Out first, sporting some non-Hart Dynasty gear, is Natalya to a decent amount of fanfare. While Nattie poses in ring, the camera cuts to Lay-Cool (for the first of many times), who are doing commentary for the match. The former champs complain about being kicked off of Raw by Natalya (Who let them come back?). Melina is out next and is all smiles. The two Divas shake hands and the match is underway.

Melina and Nattie lock up and Nattie takes Melina down with a headlock take over, which is quickly reversed by Melina with a legscissors. Nattie kips up and hits Melina with a kick to the gut, before taking her down with a super delayed suplex for a near fall. Melina rolls out to the apron and Natalya pursues, but Melina slows her with a kick, followed by a sunset flip into a backbreaker. Melina goes for a few pins to no avail, but gets right back on the attack with a unique legscissors submission. Nattie bridges back, pinning Melina for two count, but Melina kicks out, keeping the submission cinched on tightly. Melina tries to convert into a pin, but can’t get Natalya’s shoulders down. Melina finally relinquishes the hold, but not before kicking Natalya square in the back.

Looking to finish off her opponent, Melina comes charging across the ring, but Natalya turns her inside out with a vicious discus clothesline. Nattie muscles a dazed Melina into the corner, prompting the official to pull her away. Nattie goes to follow up and runs right into Melina’s boots. Melina goes to kick Nattie, but is caught by the foot, who makes her do the splits the hard way (ouch!). Nattie hits Melina with a low drop kick, followed by the Sharpshooter. Melina fights valiantly to escape, but is forced to tap out.

As Natalya celebrates her win, Layla and Michelle hit the ring and go on the attack. The BFFs lay Nattie out while the camera cuts to a dejected Melina limping backstage, leaving the champion at the mercy of Lay-Cool.

I have to say, this is the best I’ve seen Melina since her return. She’s had a lot of sketchy matches since she came back from her injury, but she was on point tonight. I hate to say it, but I think a lot of it has to do with being in the ring with someone as experienced as Natalya. I think both women really shone tonight and I can’t wait to see what they do in the future together.

Speaking of the future, it looks like a Melina may be teasing a heel turn and a possible feud with Nattie. Under normal circumstances, I would chalk up Melina’s inactivity during the beatdown as nothing special. However, both the cameras and commentators drew special attention to Melina’s exit. Hopefully, WWE follows through on next week’s edition of Raw.

One thing I am confused about is Lay-Cool. Are they banned from Raw or not? Are they feuding with Beth or with Nattie? WWE doesn’t seem to know where they want to go with the team, but insists on putting them into separate programs on both show. I don’t have a problem with Lay-Cool but a decision needs to be made, because it’s beginning to become a bit overbearing.

All in all, a very good showing for the Divas this week. We got good matches, continuity and no one’s hair got snatched out. Everyone wins! That said, I can only hope we get the same treatment next week. As I’m sure we all know by now, WWE isn’t exactly known for their follow-through.