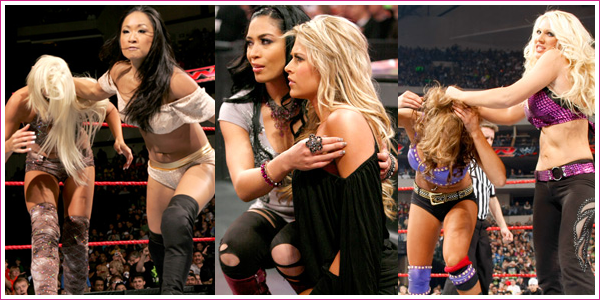 With Maryse two weeks into her return, fans have been less than impressed with her all-around performance. Her return was more head-scratching than anything else and her match last week didn’t show her in-ring skills as much as a more refined affinity to sneak out a win. Will she continue on that path this week, or will we see a more ring-focused Maryse?

We start our night seeing that Kelly Kelly has been handed the duty of announcing the night’s first Divas match. I’m not all the surprised that they saddled Kelly with this random job, since the WWE has a tendency to stick Divas in announcing positions when they don’t know what else to do with them. We’ll see if this becomes a regular thing or was just a plot device to bring in Melina post-match.

The match in question is Gail Kim vs. Maryse. I’m psyched to see Gail get some one-on-one action, as she’s usually stuck in tag team matches (aside from the odd Superstars match). Let’s see if she can pull some good things out what’s so far been a lackluster return angle for Maryse:

The match starts off with a requisite show of arrogance by Maryse–she actually shoves Gail by the head twice. Gail seems to keep her annoyance in check until she spears Maryse to the mat, pounding on her until she’s shoved off. Maryse darts to safety at the other side of the ring, but Gail keeps on her, tossing her by the hair and whipping her into the ropes. Maryse hangs on to the ropes, but Gail drags her back to the middle of the ring by a leg, making Maryse hop along. Gail tosses Maryse’s leg aside, spinning her, and then slamming her down with a hard clothesline.

Maryse crawls to the corner, and once she’s to her feet, Gail charges at her, slipping out of the ring and back in under the ropes, out-smarting Maryse and rolling her up into a pin attempt. Maryse kicks out at two and wanders to the next corner, only to be sandwiched into it by a flying Gail. Maryse drops to her butt, and Gail proceeds to drive her knee into her neck, using her standing leverage to apply the pressure. Gail eventually backs off and Maryse gets to her feet, simply slapping Gail in the face in rebuttal.

She quickly sees the error in that and slips out of the ring, Gail giving chase. Maryse looks to be the slowest-running Diva in history, running slow enough that Gail probably could have caught her blindfolded while hopping on one leg. Unsurprisingly, Gail catches up to her, pounding her head onto the ring apron before letting her slip into the ring. Gail continues the punishment, driving Maryse’s face into a third corner, then climbing it and and presumably going for an aerial attack. Before she can take flight, however, Maryse kicks her right in the back of the legs, sending her head-first to the mat. Maryse goes for the pin and (probably unnecessarily) uses her feet for leverage by propping herself on the ropes. The referee doesn’t see this (he actually does, but shh…) and counts the 1, 2, 3..

Kelly announces Maryse as the winner, which apparently ticks her off, as she immediately switches her attention to Kelly. She exits the ring and takes the microphone from Kelly, telling her that she forgot to announce her as “the next Divas Champion”. Kelly guffaws at this, but Maryse tells her to say it, shoving her for emphasis. Kelly shoves her back, and we’ve got a cat fight on our hands. She manhandles Kelly a bit before Melina comes to her rescue, running in like a bat out of hell. Maryse runs for the hills as Melina checks on Kelly.

The match, as always, was super short, but it was effective in developing Maryse’s cowardly character. Gail, as Melina did last week, got in all the blows and dominated the match. She did great doing so, using her flash to dominate Maryse without making the match boring and one-sided. I’d always love to see more of Gail, and this seems like the best we’ll get in that department while another babyface is Divas Champ, so I’m satisfied with this. Maryse, as will eventually be the pattern, sneaked out the win, showing that she may not be the smartest or most talented Diva, but she sure as hell is the most opportunistic. Kelly seems shoe-horned into this segment, just acting as babyface fodder for Maryse to pick on.

I liked that Maryse actually showed some aggressiveness in attacking Kelly and beating her down. It demonstrated that she can be tough, even though it was more or less a dirty attack. It pays to show that while Maryse is a coward and will run from danger, she isn’t a complete flake as a competitor. She plays her arrogant character perfectly, down to the mannerisms and facial expressions–maybe it’s a good thing they’re focusing on that rather than her wrestling. I know people are frustrated that everyone else puts in the work and Maryse gets the push, but Maryse is certainly benefiting from a “right place, right time” situation. Sure, Gail is more talented and has undoubtedly put in more effort, but as a babyface she’s not in a position to feud with Melina over the Divas Championship. Maryse is the one candidate that works at the moment (Jillian went bust, and Alicia’s push was a one-and-done for the second time), and in my opinion they’re using her in a way that works and is somewhat interesting and different.

Melina’s appearance was the usual “babyface savior” role that Mickie, Trish, and many others before her have played (probably all for Kelly, now that I think about it), but it served it purpose–to continue her frustrating “slipped from her fingers” cat-and-mouse game with Maryse another week without spoiling it with a direct confrontation. I just hope that the WWE can extend this successfully in the coming weeks without making it tedious and forced.

I thought this was it for the Divas this week, but surprise!!–we’ve got another match on the card. This one seems destined for silliness, though, as it’s Eve Torres and Hornswoggle vs. Jillian and Chavo:

We see Chris Masters and the Bellas at ringside with Mark Cuban (in his usual “courtside” position with the Dallas Mavericks–too bad he can’t yell in anyone’s ear tonight). This image manages to make the fact that the Bellas are nothing more than guest host escorts look even more ridiculous. Usually they’re seen with the host a few times a night, but with them seated beside Cuban all night, it makes them look even more like nameless arm candy. I truly feel sorry for them that this has ended up to be their use for the company. Sure, they’re getting paid big bucks to just stand around, but this has got to be kind of soul-sucking.

After fooling around a bit, Hornswoggle skirts out of the ring, tagging in Eve. This, according to the rules, brings in Jillian. They circle each other a bit and Chavo distracts Eve, allowing Jillian to attack her from behind. She plants her with a sidewalk slam, going for the pin and getting a 2-count. She slams Eve into one corner and whips her into the other, then swinging her by her hair and slamming her to the mat.

Jillian taunts the crowd, taking her time as Eve struggles to pull herself together. Jillian drags her to her feet, whipping her into the ropes. Eve turns the tables, kicking Jillian in the face and bouncing off the ropes, ducking a clothesline, bouncing off the opposite ropes and finally taking down Jillian with a clothesline of her own on the return. She keeps up this momentum with a series of dropkicks, getting a 2-count out of a pin attempt. She whips Jillian into a corner, attempting a monkey flip that Jillian blocks. With Eve prone on the mat Jillian attempts her cartwheel elbow, but Eve brings up her knees, driving them into Jillian’s side.

She finishes Jillian off with her flipping splash, getting the 3-count for her team. Eve and Hornswoggle celebrate post-match, dancing a bit before Chavo attacks Hornswoggle and holds him in a choke. Eve sticks up for him, telling Chavo to let him go. Chavo obliges and turns his attention to Eve when she stands in his way. Before anything can happen, though, Chris Masters climbs into the ring and pops his shirt off (gratuitous It’s Always Sunny in Philadelhpia reference on my part), seemingly defending Eve. He spends out 3 minutes doing his freaky pec trick (a “Stupid Human Trick” if I ever saw one) before locking Chavo into the Masterlock. Once done with him, Masters checks on Eve and helps her exit the ring.

I’m not sure if this signified the start of a storyline between Masters and Eve (we know well that that sort of thing has been started and stopped with Eve before), but I’m not really concerned with that. What I got out of this segment was the good work between Eve and Jillian–they got a bit of time to shine, which kind of surprised me. I totally expected the match to be a goofy thing, but they really let Eve and Jillian wrestle while the Hornswoggle and Chavo schtick was left to the post-match segment. They worked well together, and I think it was a fitting first Raw match for Eve. If this is the start of something more storyline-wise for Eve, I’m interested in seeing where it goes–maybe a feud with Jillian? I wouldn’t object, but I have a sneaking feeling that if things are going anywhere for Eve, it’ll end up with her managing Masters for a few months. That’s nothing to (pec) dance about.

The show as a whole was a surprising mix of Divas. I appreciate that the WWE found a way to incorporate several girls without shoving them all into a 6-Diva tag. Of course, it could have been executed with more finesse, but I’ll never object to more Divas time–it’s in rare supply these says. Okay, maybe I would object in certain circumstances, but as long as they’re not running around in bikinis and wrestling in mud, I’m satisfied. You know, that says a lot about the state of women’s wrestling on Raw, doesn’t it?