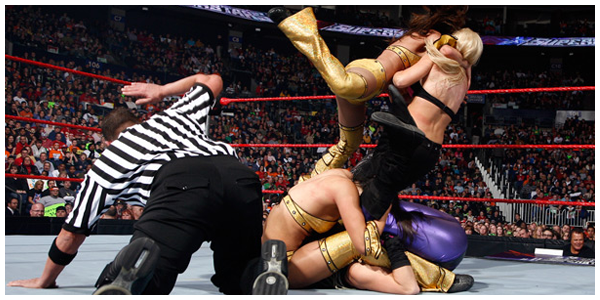 This week we’re continuing the trend of the Raw Divas wrestling on WWE Superstars, this time with some lesser-used Divas. Brie and Nikki Bella are teaming up to face the un-crowned JOB Squad of the WWE, Jillian and Katie Lea. Watch the match below:

The Bellas make their entrance, and Jillian and Katie Lea enter together to Jillian’s music (how weird is it to see Katie Lea walk out to Jillian warbling? it definitely doesn’t fit, to say the least). Brie and Katie Lea start things off, Katie latching her into a reverse bear hug maneuver. Brie gets free, turning it into a hip toss. She keeps a hold on Katie’s arm, wrenching it and dragging her to her corner, tagging in Nikki. They both grab Katie’s legs and flip forward in a move that isn’t so much effective as it is flashy (but that’s par for the course with the newer Divas these days, I guess). Nikki goes for the pin and gets 2.

Katie gains control and forces Nikki into the corner, tagging in Jillian. She gives Nikki a kick before tossing her across the ring by her hair. She takes Nikki’s arm and twists it back in a bit of an unorthodox half nelson. She woman-handles Nikki a bit before whipping her into the corner, going for an attack but getting an elbow to the face instead. She gives Jillian a kick before climbing the turnbuckle and hitting a flying body press. She goes for the pin, and gets a 2-count, quickly pulling Jillian up and tagging in Brie.

Nikki tosses Jillian off the ropes and hits an arm drag, then hitting another arm drag on Brie, landing her on top of Jillian. Brie attempts a pin, but no luck. Brie hits her leaping snapmare, then goes for a monkey flip but is distracted by Katie Lea, allowing Jillian to shove her to the mat. Jillian plants a few boots on her and chokes her on the ropes, relenting to the referee’s scolding and stepping back.

With Brie’s head sticking conveniently out of the ring and the ref’s back turned, Katie takes the opportunity to stomp on it. Jillian pulls Brie to her feet and tags in Katie, holding Brie prone so Katie can get a lick in. Katie then locks Brie in a submission, seated on her back. Brie gets free, giving Katie a few jabs in the midsection. She runs the ropes and attempts a body press, but Katie catches her. Still, Brie tries to reach her sister’s hand, but Katie whips her around and slams her with a backbreaker. Posing for the crowd, Katie goes for the pin but only gets a 2-count.

Brie tries to make it to her corner and Katie just mocks her, slamming her face to the mat. She whips her into the corner and charges, but only comes up with turnbuckle. She regroups and goes for a clothesline but Brie ducks, rolling to her corner and tagging in Nikki. Katie goes for another clothesline but this Bella ducks it too, bouncing off the ropes and hitting her with a flying shoulder attack. She hits two dropkicks and blasts Jillian for good measure. She whips Katie into the corner and hits a monkey flip, then flipping again to snap Katie’s head forward and back. As Katie tries to recover from this case a whiplash, Nikki goes for the pin. she gets a 2-count.

Once Katie gets to her feet she gain control, nailing Nikki a few times before whipping her to the ropes. Nikki stops herself and kicks her, using her thigh as a stepladder to climb to her shoulders, seated in the chicken position before turning it into a pin. Jillian runs in to stop it, but Brie comes flying in, using her own sister’s back as leverage to take her out. Nikki holds the pin and gets the win for her team.

The match was pretty much what I expected–flashy moves from the Bellas with lots of selling and slower, more deliberate moves from Jillian and Katie Lea. I’d describe it as predictable, but fun nonetheless, because I like getting to see matches with these Divas who don’t get to wrestle often. It’s interesting even if the match isn’t terribly different. I wasn’t fond of the ending, though–it just wasn’t forceful or believable, and was just about as effective as the dreaded roll-ups we hate so much. I’d much prefer a move with actual impact to pin a Diva like Katie Lea, but with how the WWE has buried her, I suppose a weak pin is the least of her worries. It’s sad that these two talented Divas have been demoted to Bella punching bags, but I guess it’s better than disappearing from TV altogether (right, Katie?).

I can’t say I’m surprised either, because the Bellas are the newer, hotter thing, and Katie Lea and Jillian have long since lost their luster in the eyes of the writing staff. I’d love for the writers to take a chance and let them actually get a win, but against the fan-favorite babyface team, I think that’s unlikely. Maybe they can use this weekly WWE Superstars spot to build Jillian and Katie Lea back up, because there’s certainly something that these two Divas can offer that doesn’t involve counting the ceiling lights.

Food for thought: Would you like to see Katie Lea and Jillian become a more permanent team?