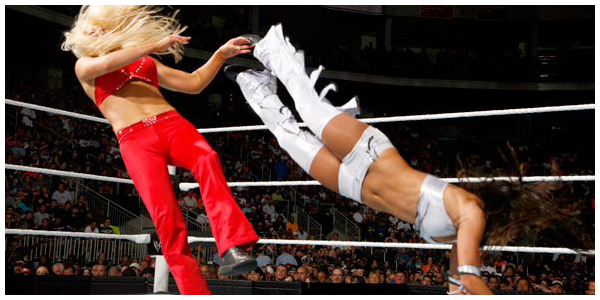 This week on WWE Superstars we have Jillian taking on the Bella Twins. Okay, so she’s really facing Brie Bella, but by now we know that when you face one Bella, it’s pretty much a 2-on-1 affair. Watch the match below:

Jillian comes to the ring all microphoned up and in keeping with the World Cup fever sweeping the world, she sings the “Olé Olé” tune until she’s interrupted by the entrance of the Bellas. With Brie in the ring and Nikki at ringside, the match begins. They start with a tie-up, Brie getting control and wrenching Jillian’s arm, but Jillian slams her to the mat. Brie regains control, twisting her arm behind her back, but Jillian quickly trips her up and causes her to hit face-first onto the mat. For good measure, I suppose, she slaps Brie on the butt. Good lord, I hope that doesn’t become some recurring thing. I can only dread what the WWE would do with a spanking gimmick.

Brie seems to take this as a personal insult, as she immediately leaps onto her and starts a bit of a tussle on the mat. After all the scrambling and hair-pulling, Jillian reverses an Irish whip into the corner. Brie braces herself against the corner, leaping and latching her legs around Jillian’s neck, but it’s telegraphed and Jillian pulls her free of the turnbuckle, letting her fall full-on onto the mat. Jillian then chokes her against the second rope, bashing her throat against it. After toying with her a bit, Jillian hits a snapmare and kicks her square in the back, attempt a pin that only garners a 2-count.

She grabs Brie by the arm and twists it back, wrenching her shoulder. When Brie starts to fight out, she simply slams her face onto the mat. Jillian hits her with a scoop slam and goes for her cartwheel splash, but is met in the midsection with Brie’s knees. This slows her down considerably, and allows Brie to go on the patented Diva babyface offensive tear (I’m sure it’s in the manual somewhere, with illustrations of dropkicks and clotheslines), hitting a series of dropkicks, a clothesline, and a bulldog. She goes for the pin, but Jillian kicks out at 2.

Jillian against reverses an Irish whip into the corner, but this time it’s Brie who thwarts an attack. She plants an elbow into Jillian’s face and scales the turnbuckle, climbing onto Jillian’s shoulders chicken-style and tires to roll it into a pin, but Jillian stops her mid-roll and sits down into a pin of her own. Brie manages to kick out at 2 and regains momentum, hitting Jillian with forearms and whipping her into the corner, leaping onto her and prepping for a monkey flip, but Jillian simply dumps her over the ropes and outside the ring. Nikki comes over to that side of the ring. Nope, nothing suspicious about this. She’s just dressed identically to her twin sister in ring attire, even though she isn’t wrestling. Nothing suspicious at all..

She crumples onto the mat outside next to Brie, and of course, they can’t tell who is who! The referee confronts them, and can tell that Brie is the one who looks all flustered, and orders her back into the ring. +1 point for referee competency! Before Brie can get back into the ring, Jillian attacks her and brings her back there herself. She stomps a mudhole in her in the corner, coming unhinged a bit, and the referee has to restrain her. This provides an opening for Nikki to switch in with Brie, and of course neither the ref nor Jillian can tell the difference. -1 for referee competency. Brie Nikki dodges an attack from Jillian and immediately rolls her up into a pin for the win.

The match was your basic heel vs. face match–nothing special, but not really all that bad. Jillian looked good being the relentless heel, maintaining control for most of the match. Brie, on the other hand, looked weaker than ever, barely getting in any offense (aside from the requisite babyface pieces of flair) and needing her sister to come in the finish the job. I know it’s their ~gimmick~, but it’s an old gimmick. In fact, I believe it’s eligible for the AARP card. It’s just old hat at this point, nothing new or entertaining, and only serves to make their opponent and the referee look like dunces while making the Bellas look like the weakest of the weak–even the lowliest Divas are able to finish a match on their own, for God’s sake!

I think, even though the switcheroo gimmick is meant to catch fans’ attention and make the Bellas look cunning, it’s outgrown its usefulness. It’s no longer an unexpected twist–you can see it coming from a mile away (see the beginning of this column, for example). Like I said, all it does is make them look like weak competitors and does nothing to build either of them to a level that makes them worthy of a consistent push outside the occasional match on WWE Superstars.

I wish the WWE would come up with something new for the Bellas, because I think these girls have potential. Making a babyface take a beating for the whole match is meant to set them up to battle back valiantly at the end of the match, not set them up to tag out and catch a breather while the fresh one immediately goes for an evasive pin. Sure, it’s something the bends the rules a bit, but in this case, I think it sets them back rather than forward like some outside the box ideas do. The message that the WWE’s sending is that one Bella is interchangeable for the other–there’s no difference. Nikki’s just a spare Brie, and vice-versa. Using both girls to their potential is something I’d like to see, and I’m sure the Bellas would appreciate being treated like individuals too.