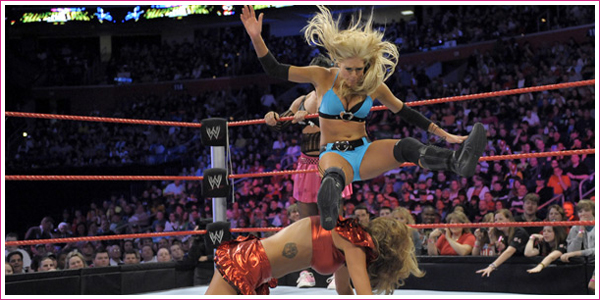 Following in the footsteps of last week’s SmackDown Divas match on Superstars, this week it was the turn of the Raw Divas. Beth Phoenix and intern, Rosa Mendes teamed up to take on Kelly Kelly and Santina. Watch below:

One thing was evident – the Raw Divas got a longer running time than last week’s blue-brand Divas. Somehow I don’t think that was because of the exceptional talent on Raw, rather for the sake of more hilarity(!) from Santino.

Starting off the match was the utterly unimpressive Rosa Mendes. This girl has been booked in a few matches now but has never done a damn thing of note, which makes me wonder what is the point? She’s simply there to make up the numbers and take the fall (as she does in this match). Anyone who wrestles in a skirt is automatically on my hitlist…

With Santino’s oh-so-comedic lulz out of the way, we get into some decent action from Beth and Kelly. More of the same predictable moves from Kelly here, but it works and she knows how to work the crowd. I like that she’s actually confident enough to try and engage the audience into her matches, whereas most of the Divas these days don’t bother trying to rile up the crowd. Kelly, with the audience behind her, hits her handspring elbow followed by more ‘comedy’ from Santino.

Rosa actually pulls off a couple of moves next, but looks pretty average in the ring. Not exactly setting my world on fire, Rosa.

I don’t know why, but I quite like Kelly’s finisher, it looked very effective on Jillian a while ago on Raw and it worked here too.

This match is pretty skippable but not wholly awful.