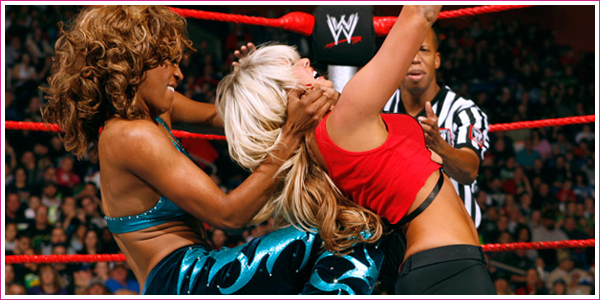 This week on Superstars, Kelly Kelly makes her second appearance in as many weeks, taking on Alicia Fox. Will this week’s match be as entertaining as last week’s bout? Let us see:

They start with a tie-up, Alicia roughing Kelly up to gain control and wrench her arm into an arm bar. Keeping the hold locked, she slams Kelly by her hair to the mat, crouching to get the best angle on the hold. Kelly hops up, but Alicia won’t let go, wrapping it even tighter. Kelly seeks refuge in the corner, climbing the turnbuckle, hopping down butt-first onto the top rope, flipping backwards and tossing Alicia across the ring with an arm drag. Not gonna lie, that was pretty impressive..

Alicia is stunned, but manages to beat Kelly to the punch, whipping her into the opposite corner. Kelly stops herself on the turnbuckle, though, pushing herself backwards and over Alicia. She does a back tuck to keep momentum, then meeting Alicia with a dropkick when she charges towards her. Kelly goes for the pin, but is unsuccessful.

Both get to their feet at the same time, trading blows until Kelly runs the ropes, going for an attack that Alicia telegraphs, hoisting Kelly up and into a backbreaker. Alicia goes for a pin, but gets a 2-count. Not satisfied (and obviously feeling that Kelly will change her mind and stay down), she goes for another pin, but gets the same result. She circles her prey before grabbing her by the hair and planting a knee into her back, wrenching her by the neck.

With Kelly’s struggle, the move does a 180, Alicia shifting to her feet but keeping the knee firmly in place. Kelly slowly gets to her feet, but before she can counter, Alicia scoops her up. Kelly scoots over Alicia’s shoulder though, rolling her up into a pin attempt that Alicia kicks out of. Damn, the way Alicia reacted to that counter made me think it was a botch. Just good selling, though. Alicia is obviously pissed off by this, delivering a blow to Kelly’s face and taking her time, pacing the ring and taunting the crowd. This elicits a decent reaction, but I’m not sure if that’s more due to Alicia’s heel spark or Kelly’s success as a babyface.

Alicia stands over a prone Kelly, grabbing her neck and wrenching her back. Kelly tries valiantly to get free but Alicia just won’t let up, pounding her in the back and tossing her out of the ring. However, Kelly has other plans, holding onto the top rope and trying to hoist herself back over it. Alicia stops this, kicking her in the back and leaving her sitting on the apron. Alicia goes to grab Kelly through the ropes but Kelly shoulders her in the stomach, performing a sunset flip over both Alicia and the ropes and into a pin, which Alicia kicks out of. Furious, Alicia takes a swing at Kelly that she ducks. Both girls run for the opposite ropes, meeting in the middle. Kelly wins this meeting, taking Alicia down with a tilt-a-whirl headscissors..

Building momentum, Kelly nails Alicia with a series of clotheslines, then hopping up and taking her to the mat with a frankensteiner, hooking the leg for a pin that only elicits a 2-count. She lands a few forearms to Alicia’s face, whipping her to the corner and amping up the crowd, performing her handspring elbow. However, instead of meeting Alicia’s stomach she meets her knees. Alicia drives them into Kelly’s back, dropping her to the mat. Watching Kelly closely as she tries to get to her feet, Alicia then springs into action, nailing her with the scissors kick. She gets the pin and the win.

I absolutely love that these girls–the ones not necessarily on the front lines, but are worth merit nonetheless–are getting a chance to show what they’ve got. While they may not get much face time on Raw, they’re getting better matches and more ring time than Melina and Jillian have these past few weeks. This is like the second coming of WWE Heat, where Divas would have spectacular matches and get much more room to breathe than they would on the more mainstream shows. If the likes of Kelly and Alicia keep getting these opportunities, they could be ready for the big time very soon.

I particularly admire Alicia’s heel tactics, being absolutely tenacious against Kelly. She just wouldn’t let up, and totally sold that bitchy attitude. She’s got great ring presence and while she might resort to rest holds too often, she shows that she, more or less, knows what she’s doing in there. Kelly is still the flashy babyface, but I guess there’s a place for that in the division. I’m not sure if she’ll ever have too much substance in her ring work, but I’m beginning to become satisfied with that. But when she gets into a legitimate title feud, we may have troubles.

Of these two girls, who were hired at nearly around the same time, Alicia seems better groomed as a wrestler. That probably has a lot to do with the fact that she got a lot of time in the developmental system with plenty of time to fine-tune her wrestling while Kelly stripped on ECW. But for what it’s worth, Kelly has blossomed into quite the fan favorite. She could easily be one of Raw’s top babyfaces if she was given the chance. I think this match is a sign of what’s to come–both of these girls could be the “future” of the Divas division in the coming years. They’re the “next class” so to speak. And if this match is any indication, with some fine-tuning, the future shouldn’t be all that shabby.