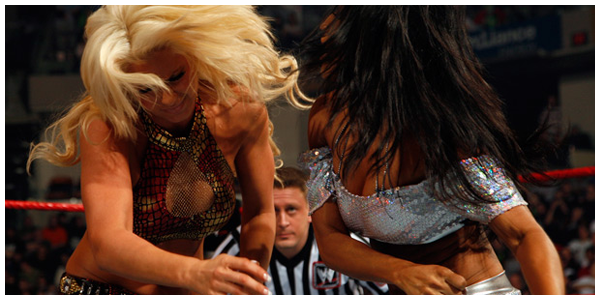 The bait and switch pulled at the Elimination Chamber PPV led many of us to believe that the WWE had bigger plans for the Divas Championship tournament finals. Perhaps a lengthier feud to build up such an important match? No, as it turns out, because they finally decided to have the match on a regular old ordinary episode of Raw. Watch the match below and see if it was worth all the wait:

It definitely surprised me when the Divas Championship logo passed over the screen. But I think, more than surprise, I felt relief–finally this tournament is over! Maryse makes her entrance, and Gail Kim follows. It is mentioned how badly Maryse treated Gail in their tag team match the night before, but other than that this doesn’t feel like something that has been built up over numerous weeks. It feels more like the beginning of a feud; one that started at the PPV last night. At any rate, I’m glad to see this match finally happening. Let’s get on with it.

Maryse goes for the attack at the start of the match, but Gail slips past her, catching her in a belly-to-back hold. Maryse strikes Gail to get free, but the next blow is missed, and Gail rolls Maryse into a pin. Maryse quickly kicks out. Maryse reversed an irish whip into the corner and charges at Gail, but Gail slips out through the ropes, allowing Maryse to run full on into the turnbuckle. Gail blocks a few attacks from Maryse and leaps back over the ropes, continuing the momentum into a pin attempt. Maryse kicks out at 2.

Gail goes on a string of offense, Maryse beginning to look sluggish. It’s only until Gail tries to bash her head against the turnbuckle that Maryse retaliates. She blocks it with her boot and hits Gail’s head against the target instead. She tosses Gail in over the ropes, but Gail quickly reverses momentum into an attempt at the Eat Defeat, but Maryse holds onto the ropes, blocking the move. She kicks Gail across the face and goes for the pin, getting a 2-count.

Maryse picks Gail up, but Gail sweeps her feet, bridging into an unsuccessful pin attempt. Maryse is whipped into the corner but dodges an attack from Gail. Gail still manages to kick Maryse in the head from her perch on the turnbuckle, though. Gail goes for a flying attack, but Maryse tosses her off of the top rope at the very last second, letting Gail crash land on the mat. This seems to take a lot out of both girl, with Maryse holding onto the side of her face for some reason.

Both get to their feet very slowly and Maryse preps for the French Kiss, but Gail pulls her into a small package pin. Maryse kicks out at 2. Both girls stagger around, and Gail hops onto the top turnbuckle, coaxing Maryse over and managing to get on her shoulders. Maryse drops Gail throat-first into the ropes, and Gail snaps around, in perfect position for the French Kiss. Maryse hits it, and gets the 3-count, winning the Divas Championship.

I can’t say we didn’t expect this from the beginning–the outcome, at least. Most knew that Maryse was going to win this, and that a full-fledged tournament would have been a waste of time. Little did we know back then how long this tournament would actually take. This nonsensical stretching out of this tournament killed what little momentum it had, and expose what little thought the WWE has invested into it. They seemed indecisive about what exactly they wanted to do–they held off the finals for weeks so that it seemed like they wanted to have the big blow off match at a PPV, yet when the match is booked for a PPV, they switch it moments before it is to take place with a inter-brand tag team match.

That move led some to think that they wanted to build this match up a bit, but instead the WWE plops the match on a regular Raw and gives it about as much time at we expected–3 whole minutes. Perhaps they thought they couldn’t get away with such a short match on the PPV? That’s the only reason I can think of. They might have thought Maryse’s sneaky actions at the PPV would have added some last minute fire to the Championship match, but that wasn’t really the case. Many of us were tired of this and just wanted the match to happen so they could move on. Well, that wish was granted, and in unremarkable fashion. It simply wasn’t worth the month-long wait, and felt more like the WWE felt that they had to have this match as much as they wished not to, and threw it out there just to get it over with.

This match fit well with the short, underwhelming matches that populated the rest of the tournament, though one would hope that the finals would be a little more impressive. As always, Maryse managed to do as little wrestling as possible, and sneaked out a win. I wonder how the WWE will handle her reign if they are so dead set against having her actually wrestle. I just hope the bookers manage to book a somewhat coherent feud this time. I’m just so damn glad we can move on now.

Later in the night, the rest of the Raw Divas are seen backstage with guest hosts Jewel and Ty Murray. They make awkward small talk before Jillian shows up to croon Jewel’s “You Were Meant for Me”. She gets the brush off, of course, and Jewel shows her how it’s done. Jillian gets defensive and mouths off to Jewel, who slaps her in the face. Jillian wails “Why does everyone slap me??” as Alicia Fox helps her leave. Great comedy bit by Jillian, and I absolutely cracked up at that line. First Sharon Osbourne, now Jewel. Eventually Jillian might be able to open up a music Hall of Fame just based on the people who left handprints on her cheek. Batter up, Cyndi Lauper!

Later on they have a Divas Bullriding contest with Eve Torres, Kelly Kelly, and the Bella Twins riding tandem, which was more like an excuse to see the Divas bounce up and down, because the mechanical bull was as slow as hell and no one had any trouble staying on past the limit. It was largely pointless until the Miz and the Big Show came in to inject some comedy into it. I’m all for the Divas doing stuff with the GMs, but when it’s as time-wasting as this, I’m not too fond of it. It would’ve been much funnier to see Jillian hop on the mechanical bull and go flying rather than see the same boob-bouncing move 3 times over.

The show was a mix of relief (that the Divas Championship tournament is over) and boredom (the short, unremarkable match and the “bullriding”). I’m looking forward to where the WWE will go from here, now that they finally pulled the trigger on giving Maryse the Divas Championship. I’m not expecting anything grand, but a change of pace would do us all good, right?

Food for thought: How long do you think Maryse will hold the Divas Championship?