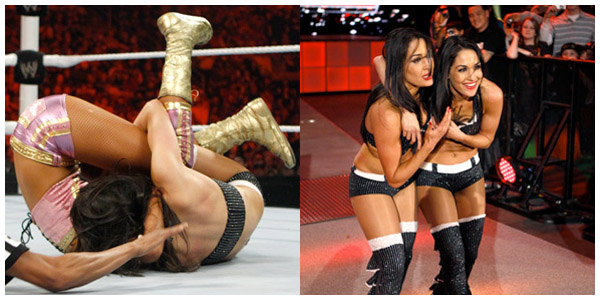 After successfully defending her Divas Championship on last week’s edition of Monday Night Raw against Natalya, it looks Eve is looking to face off against new challengers. This week, Eve teams up with Gail Kim to take on The Bella Twins. Will the dastardly duo use their ‘Twin Magic’ to get one up on the champ, or can Eve and Gail get revenge for the backstage beatdown they received last week?

Check out the match below:

We start things off with all four competitors in the ring and The Bella Twins are busy talking a lot of smack. Hope they can back that up. Before the match starts, we’re treated to a replay of last week’s brawl. I swear, the image of a Bella snatching Eve up by the throat will be forever etched into my memory. With the replay done, the official signals for the bell and our match is underway.

Gail and Bella #1 start the match off with a lock up and Bella gets the upperhand, backing Gail into the ropes. The referee pulls her away, but while his back is turned the other twins tries to distract Gail. Bella #1 tries to capitalize on the interference, but Gail tosses her through the ropes and to the floor.

As Gail tries to deal with Bella #1 outside of the ring, the numbers game comes into play and the twins are all over her. Fortunately for Gail, Eve comes to the rescue, laying out the illegal Bella with a clothesline. With one of the Bellas neutralized, Gail throws Bella #1 back into the ring and goes to work with a flurry of strikes and a leaping clothesline in the corner. Gail charges in a second time, but Bella #1 dodges, only to be taken down by a crossbody for a nearfall.

Gail picks up Bella, whips her to the corner and hits her signature crossbody through the ropes, sending her opponent reeling. Gail attempts to follow up with a springboard maneuver, but Bella #2 grabs her by the foot and pulls her off the apron, damn near killing her in the process. WOW! What a bump! Bravo Gail!

Bella #1 picks Gail up off of the floor and smashes her face into the ring, before tossing her back into the ring. Bella #1 tries to finish Gail off with a leg drop, but Gail moves at the last moment, sending her crashing to the mat. Both crawl to their respective and manage to get the hot tag.

Bella #2 comes flying across the ring like a bat out of hell, but Eve sends her crashing into the turnbuckle headfirst and follows up with a stiff forearm to the face. Keeping the pressure on the Bella, Eve whips her off the ropes and hits a dropkick, followed by a crossbody for a one count.

Not done yet, Eve lays Bella #2 out with a flurry of strikes and her patented standing moonsault. Eve goes for the pin but is distracted by Bella #1, allowing her sister to catch Eve in the gut with a kick. While Eve is down, Bella #2 knocks Gail off the apron, sending her into a frenzy. While the referee is dealing with a livid Gail Kim, Eve rolls up one of the Bella Twins. Unfortunately for Eve, Twin Magic strikes again as the other Bella runs in and rolls Eve up with a small package. Not noticing the switch, the referee counts to three. Yes, you read that correctly. One of the Bella has pinned the Divas Champion (Not sure which one though…).

Another solid night for the Raw Divas. As I said on The Post-Raw Show, I may not agree with the sketchy booking of Eve, but I enjoy watching her in the ring. She has a decent moveset and is always breaking out something new, which I can appreciate. Hopefully, WWE can give fans a reason to care about her, because her poor booking and lack of character is what’s holding her back from being a great champion.

Gail was great as usual, but that bump she took was absolutely cringeworthy. I actually feared for her life when I saw one of the Bellas snatch her down to the floor. Definitely one of the best moments of the match.

And finally, the Bella Twins. Not that long ago, I thought the Bellas were on their last legs. I found their gimmick dry and stale. I mean, how many times can you do that switch before no one gives a damn anymore? That said, I really think this heel turn has breathed new life into them. Not only are they showing more character, their ring skills seem to be better than they ever were. The new Bella Twins are, slowly but surely, converting me into a fan.

Once again, solid action from the girls tonight, but where is this storyline going? One could assume The Bella are gunning for the title after pinning the champ. Does that mean we have another Lay-Cool on our hands? Maybe we could even see some kind of Diva tag team division forming (not likely). In any case, I’m curious to see where this story goes on next week’s edition of Raw.