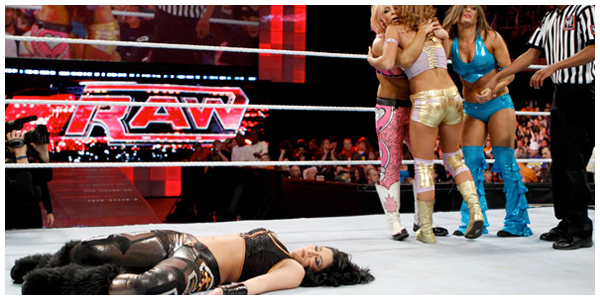 After a few altercations in the past two weeks, Natalya finally gets to have her way with Melina in a six Diva tag match on this week’s edition of Raw. Will Natalya get the last laugh or will the slap happy Melina take it to the champ once again? Watch below as Nattie, Eve and Brie Bella take on the team of Melina, Maryse and Alicia Fox:

The Divas segment starts off with a replay of the tension between the champ and the #1 contender, which segues nicely into the entrance of Melina’s team. After a quick commercial break, we come back to Nattie’s team in the ring. I can only speak for myself, but I was shocked and confused to see Brie Bella joining Nattie and Eve in this match. With their current storyline with Daniel Bryan, I would have thought there would have been some progression there and Gail Kim would be taking the #3 spot in this match. In any case, the official signals for the bell and Maryse and Brie kick things off for their respective teams.

Maryse starts the match off with a double pieface to Brie, which sends Brie into a frenzy. Brie leaps after Maryse and both ladies go rolling around the mat. The ref manages to pull them apart and Maryse jumps to the floor for a breather. However, Maryse’s rest is cut short when Brie jumps out of the ring and gives chase. After a lap around the ring, Maryse jumps inside the ring and slams Brie’s face into the mat when she attempts to follow and gets a nearfall for her effort.

After a few slap and stomps, Maryse lays Brie over the middle rope and comes charging with a hip attack. Before Brie can mount a comeback, Maryse kicks her in the gut, sending sprawling to the outside of the ring. Uh-Oh!

While the Maryse and the referee argue for no reason whatsoever, Nikki Bella pops out from under and pulls her sister to safety and takes her place. Oblivious to the switch, Maryse goes to the outside and tosses the fresh Nikki Bella into the ring. Maryse goes to finish her opponent, but Nikki counters into a facebuster and goes for the pin, which is broken up by Alicia.

Both Nikki and Maryse crawl to their corners and make a tag, sending Alicia and Natalya into the fray. Alicia tries to take the champ out with a clothesline, but Nattie evades and lays Alicia out with a few clotheslines of her own, followed by a snapmare and a dropkick to the back of the head. Nattie levels Alicia with a scoopslam and sets up for the sharpshooter, but Melina runs in and distracts her. Natalya chases her off, but Melina snags her foot once she turns her attention back to Alicia. The distraction gives Alicia enough time to get on the offensive, kneeing the champion in the gut. Unfortunately for Alicia, her advantage is quickly lost as Nattie comes back with a beautiful butterfly suplex.

With Alicia out of the way, Natalya goes after Melina once again, but gets hung over the top rope. Alicia scrambles to tag in the fresh Melina and succeeds, but can only look on in shock and horror as Natalya nearly decapitates Melina with a discus clothesline. While Melina staggers to her feet, Natalya tags in Eve, who finishes Melina off with a corkscrew neckbreaker to pick up the win for her team.

Let me start off by saying this: I have nothing against Eve Torres. In fact, I’ve said on several occasions that I think she has a lot of potential inside the ring. That said, I still don’t understand why she picked up the win for her team. After going through the trouble to turn Melina heel, start a feud with Natalya and make her #1 contender just to destroy her credibility in a tag match (even though I have my theories). Logically, Eve could show up next week and say she’s earned a shot at the title since she pinned the #1 contender, a point that is hard to argue with. Unfortunately for Eve, WWE doesn’t run on logic and this will likely be forgotten next week. Hopefully, this feud between Nattie and Melina gets back on track next week, because it almost came to a standstill this week.

As for the match itself, I enjoyed it. I thought all the Divas involved got a chance to shine and there were no noticable botches or sloppiness. Aside from the ending, my biggest complaint was the Bellas’ ‘Twin Magic’. It really loses it’s novelty if it doesn’t actually work. Just saying… I realize I may have been a bit harsh on The Post-Raw Show last night, but I stand by my statement that the random ending completely overshadowed what was a pretty good match, in my honest opinion. For the first Raw of the year, the Divas came close but no cigar.