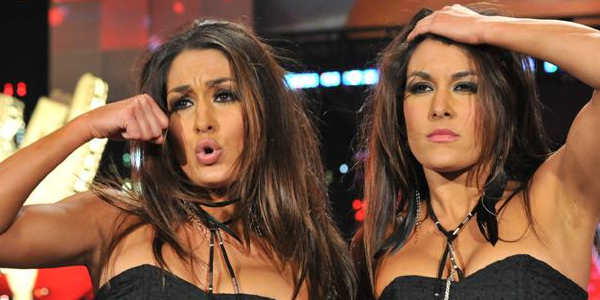 Oh, except according to Dictionary.com, Malnurtured is not really a word. Oh Brie Bella. If my face were an emoticon, it would be the frown face one.

Yes, it’s me. Not only am I the resident Khaleesi of Diva Dirt Live, I’m also your Raw Redux writer, at least for this week. I’ve overthrown Steven, high-jacked his Redux, and now I ‘m going to grace the minds of each and every reader with my opinions of what went down this week. You’re absolutely on the edge of your seats, aren’t you? It’s been a hot minute since I’ve written one of these thanks to the lack of action of SmackDown, as well as, an out of town trip on my part. Forgive me if it isn’t up to my usual standards. I’m just giving you all fair warning.

We all follow the Bella twins on Twitter, right (twitter.com/thebellatwins)? Earlier in the night they teased that they were going to reveal the truth about Diva’s Champion, Kelly Kelly, which I reckon was their way of building heat for the Brie versus Kelly title match this Sunday at Money In The Bank. It followed a match featuring the rarely seen Diva known as Melina, who took on the champ. There is also a random guest appearance by Eve Torres. Lets take a look at how everything went down, shall we?

Raw comes back from break with Melina in the ring, playing to the crowd. If you’re anything like me, you were shocked by this (not to mention overjoyed, estatic, happy, insert other adjective here…), and the moment was cut short when they switched to the Bella twins over at the commentary booth. Brie, and Nikki Bella, are being their wonderful selves. We have all the makings of an epic Diva segment, right?!

Kelly comes to the ring, all smiles, proudly displaying her championship. The Bellas start letting the snarky comments fly, and once Kelly gets in the ring and finishes posing, the bell rings. Melina takes charge with a quick snapmare to get Kelly down and slams her foot in the back of the champ. Melina crosses Kelly’s arms and pulls them back and begins to try and wear down 2K. While Kelly is screaming bloody murder, the Bellas start to make comments about how skinny Kelly looks.

Kelly is able to fend off Melina and take her down with a series of clotheslines. Melina ends up tossed in the corner and Kelly nails her with her round-off/slam her body into her opponent combo, and then to further humiliate the five-time former champion, Kelly slaps her own bum and calls for the stinkface. Melina is forced to eat a face full of 2K backside. She rebounds from Kelly’s offense completely horrified and attempts to subdue the spirited blond. It doesn’t work and Kelly puts Melina down with a reverse neckbreaker. She goes for a cover but Melina kicks out.

Both girls make their way to their feet and Melina manages to double Kelly over with a kick to the gut. Kelly downs down and Melina backs up, uses the ropes for momentum, and goes for a kick to the skull. Kelly ducks it and once again Melina proves her flexibility to the world. She lands in a very uncomfortable split and unfortunately, she is slow to get up afterward. Kelly beats her back up and Melina ends up on the receiving end up 2K’s finisher. The champ gets a decisive three count this time, as well as a respectable victory.

The Bella twins are not happy by this outcome and they cut Kelly’s celebration in the ring short. Nikki and Brie make their way to the ring, microphones in hand, and call for the crowd to pay attention to what they’re about to say. They tell Kelly that since her match is over, she should probably go find some food because Kelly’s whole one meal a month diet just isn’t healthy. They claim that Kelly’s skin is just crying for attention, saying ‘feed me, feed me’ and they ask the cameraman to take a close-up of Kelly’s face. They say underneath ‘this painted on, clown face, weave head’ is someone who desperately needs to invest in some Pro-Active.

For those of you unfamiliar with Pro-Active, it’s an acne fighting solution that is popular here in the ‘States and endorsed by celebrities such as Katy Perry and Jessica Simpson.

Nikki says that Pro-Active did wonders for Katy Perry (yes, she botched it) and Brie adds that Kelly isn’t a teenage dream, she’s just a malnurtured nightmare.

The twins congratulate themselves on being mean girls and this prompts Kelly to defend herself. She attacks Brie and begins beating her down but Nikki is quick to come to her sister’s rescue. The twins are able to double team Kelly and apparently their double team is the worst double team in the history of double teams! Kelly is crying like she’s being stabbed and luckily for her, Eve comes rushing the ring in this impressive pair of heels to make the save.

It doesn’t really work out for Eve, sadly. She is able to take care of Brie, but Nikki is right there to put the sexy Latina in her place. Eve eats the Bella finisher and the twins leave the ring having the upper-hand for this Sunday’s match.

Pretty standard match between Melina and Kelly. It certainly one be on anyone’s list of favorite matches (it’s not like it was Melina v. Alicia) but it wasn’t bad. Kelly is good at what she does and tonight was no exception. It was amazing to see Melina on Raw despite the fact anyone with half a brain could figure out she wasn’t going to win. The post-match shenanigans is where things got a bit dicey. The Bellas, who are usually solid on the mic, flubbed their promo and it’s a shame because they play mean girls so, so well. The beatdown was well down, even if I’m still a little confused as to why Eve keeps coming to Kelly’s rescue. Part of me hopes that Eve helps Kelly retain on Sunday and then turns on her, securing herself as the top rival for Kelly’s title. At least there would be a bit of a backstory.

Raw wasn’t great this week, but it wasn’t bad. We got a lot of build-up for a pay-per-view match which is highly unusual so kudos to the ‘E for that. Normally our Diva matches are announced last minute so having this one set and announced in advance has been nice. I look forward to Kelly and Brie, which should be the blow-off match between the two, and I’ll be curious as to wear everything goes from there.

Oh, and how amazing were Vickie and Dolph tonight?! Boy do I miss them on SmackDown. They always made my Friday nights just a little sexier. Here’s their segment featuring a cameo from Drew McIntyre and Vince McMahon simply for your viewing pleasure.

Alright, that’s enough from me now. Until Friday (I hope…), Cryssi out!

Yes, I still jack my goodbye from Ryan Seacrest.