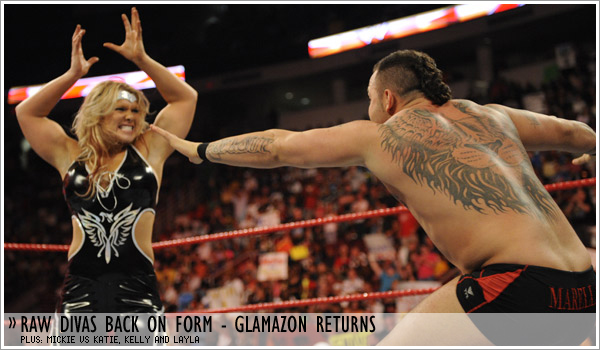 This week on Raw: Katie Lea got another shot at Mickie James, Beth Phoenix returned to Raw in sensationalistic fashion and Kelly Kelly and Layla got some airtime too!

Thoughts & Reactions
The verdict is in… I am pleased to report I absolutely loved Raw last night! Last week in Redux, I wrote:

Rawâ€™s womenâ€™s division is a holding pattern right now, I do think Creative will finally turn their attention to the Divas after the post-Draft honeymoon period is over. Right now theyâ€™re working so diligently on making the rest of the product â€œmust seeâ€, the Divas arenâ€™t their top priority.

Well it seems like the honeymoon is over and Creative have finally turned their attention to Raw. And boy, have they! Not only did they finally step up their game with the women’s division but they went one further – they booked the Divas so strongly, making them really part of the Raw mythos. Having them integrate with the Superstars gives a real sense of importance to our beloved Divas and shows that they too can be a pivotal part of Raw rather than just throwing a couple of Divas out there to fill the ‘Diva match quota’ for the week. From top to bottom, I thought this week’s Raw was fantastic and it’s really made the show ‘must watch’ television again. Since the Draft, all the focus has been on the rest of the show that the Divas were only used to fill a quota, that was my only grievance with Raw. However this week, the whole show was solid.

The big, big story coming out of Raw was the fantastic re-introduction of the Glamazon, Beth Phoenix! Beth really was dealt a blow when Melina was injured as it meant WWE had to throw away all their plans for this feud and resulted in Beth not appearing on Raw in a month. After Melina was injured, I was even left wondering just how WWE could bring Beth back at this point; it seemed the only option was to have her challenge Mickie and that’s something I don’t think any of us want to see again anytime soon. Instead, last night, WWE found a fun, interesting and truly creative way to bring back Beth Phoenix and it worked a treat! If you didn’t jump out of your chair or scream out loud when Beth’s music hit last night on Raw, you got issues! The crowd was not at all expecting Beth to rock up and damn, did she receive a hell of a pop or what?! Just when you thought there was no one left to beat Santino, out comes a Diva and not just any Diva at that! I don’t know where they’re going with this but it was interesting while it lasted. It was something new and interesting and you could tell the crowd was so into it, because it was so fresh to the current WWE product. Of course, we’ve seen Chyna come and go but in this day and age, this was something new and I think that’s why we all got so into it. Great job by WWE!

It will be interesting to see where this goes; I don’t think Beth will now become a face as some have suggested. I just don’t think Diva-wise, she could be a face but I would love to see her continue to work with Santino, maybe make this into a short feud while the Mickie-Katie programme is going on or until Candice is ready to come back. Beth is in a unique position, we loved seeing her against Santino last night but we’re designed to hate her when she’s wrestling Candice and Mickie; this could be cool. I think in this programme with Santino (if they follow through) she could be a face but when it comes to the Divas, she just has to be a heel! Hopefully they have her continue to work with Santino, it could be fun – maybe have him demand a rematch next week! This will keep Beth booked up until she’s ready to engage in a programme with another Diva. Even if it was a one off, it was fantastic.

In the opening contest of Raw, we had a rematch from Night of Champions with Mickie vs Katie. I thought this match was a lot better than their match at the pay per view, i got into it and I really wanted to see Katie pick up the win. If Katie and Paul are meant to be heels, wouldn’t it be logical to have Paul try to interfere? Instead, we had a post-match assault which worked well. I like that they are keeping the feud between Mickie and Katie going, even if we have had a two week gap (some things never change)! But yeah, this was great and then the interaction during the Intercontinental Championship match only set this feud up further, I definitely see them continuing to feud for a while with another title match on the cards! I’m suspecting a mixed tag match next week, as I wrote before – having the Divas get involved in storylines with the Superstars really gives them a sense of importance on the show. I’m all for it!

After we got Katie vs Mickie and Beth beating Santino, we got a shot of Kelly freakin’ Kelly! My first thought was “Oh my god, more Divas? This is too good to be true!” and it was unfortunately. Seems like they teased another Divas match simply as a ploy to get Kelly some screentime and further push that Raw has a new, improved flavour with 100% unpredictability. I would have loved another Divas match though! Well I guess what we got later was just as good… Layla! The backstage segment with Jamie Noble and Layla was nicely done, I hope they don’t pair them up though but at least it got Layla on TV!

Overall, I was very pleased with all the appearances of the Divas that we got! I really hope they keep this momentum going into next week, don’t let us down now!

Katie Lea: I loved the ferocity that Katie displayed this week, the spot after the match was nicely done.

Kelly Kelly: I predicted rightly, it was to good to be true when Kelly came up on the screen and we were teased another Divas match!

Layla: Whatever gets Layla on television is fine by me!

Mickie James: Usually, I find Mickie’s matches unspectacular but I really enjoyed the match with Katie and the interaction between the two during the IC title match.

The In-Between: Everyone dressed as you’d expect this week, no point writing!

Video
Watch the matches below: