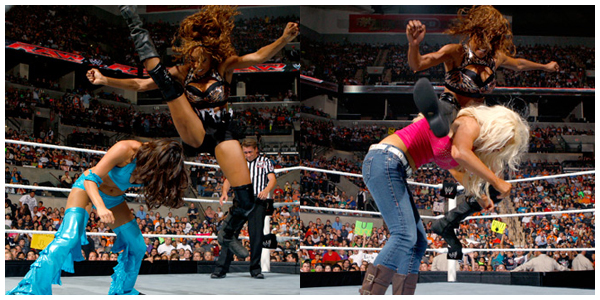 After a mysterious (and illogical) absence from last week’s Raw, Divas Champion Alicia Fox is back in action this week in a non-title bout against Brie Bella (Bella Twin #1). Will the twin Divas manage to switch their way to a upset victory over the champ? Check out the match below:

First out are The Bella Twins, who are dressed identically (I wonder why…) in electric blue. Cole and King use this time to plug the sponsor, which means I have to hear more of the Bellas entrance theme than I should. I think I’d rather watch a Khali match… The champion is out next and she’s making her way to the ring rather quickly. I guess Cena went over his allotted time this week, so the Divas have to pick up the slack as usual. The referee rings the bell and the match is on.

Alicia doesn’t waste any time going to work on Brie, laying in a kick to the gut. Alicia throws Brie into the turnbuckle, then rams her back first into the corner. Alicia snatches up Bella #1 by the hair and executes a fierce irish whip, sending Brie to the mat. Alicia proceeds to stomp out poor Brie until the ref pulls her off.

While the referee is preoccupied with Alicia, Nikki and Brie go for their patented switcheroo to turn the tables on the champ. Unfortunately for the identical beauties, Jillian makes her way to ringside and blocks their attempt to switch out. Alicia and the referee turn their attention back to the Bellas and Alicia lands a stiff kick on Bella #2, sending her down to the floor. Alicia tries to get back in control of the match, but Brie rolls her up with a school boy for a near fall. Before Brie can get in anymore offense, Alicia kicks her in the gut before landing a brutal axe kick for the win.

Post match, Jillian decides to serenade the champion with her very own rendition of Queen’s “We Are The Champions.” Obviously unimpressed, Alicia cuts her off with another impressive axe kick before leaving the ring with her head held high.

Once again, not a great week for the Raw Divas when it comes to in-ring action. The match just barely cleared the one minute mark, which is just a damn shame, to be honest. That said, this match wasn’t about the ringwork. It was about putting over Alicia as a dominant champion and in that respect, I think it served its purpose. Alicia needs to pick up some decisive victories if she wants to be seen as a serious competitors and the Bellas were the best Divas for the job.

I also enjoyed Jillian’s involvement in the match as a secondary character. It allowed her to appear on the main show as well as continue her feud with the Bellas. Her altercation with Alicia at the end was also a very nice touch. It really cemented Alicia’s place as a top heel and also planted the seeds for a future conflict between the two Divas.

All in all, it was a middle of the road night for the Raw Divas. While they didn’t quite deliver in the ring, all the little things like Jillian’s involvement, helped them avoid a truly dismal night. Unfortunately for Diva fans, this kind of performance has come to be expected from Raw in the past few months. On the bright side, at least we have something to look forward to next week…