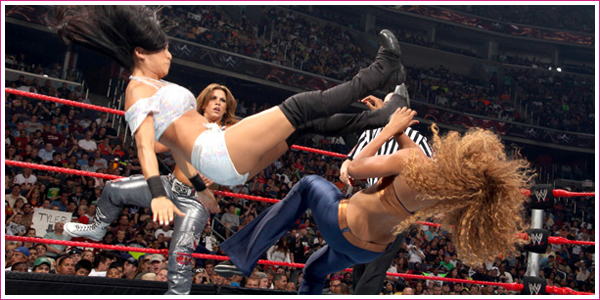 Last night’s episode of Monday Night Raw saw a changing of the guard, as Mickie James made her first appearance as the new Divas Champion. Also factor in that the former Divas Champ, Maryse is now on the injured list and you have a fresh new outlook for the Raw Divas division.

In just 5 minutes, we were given a lot of ambiguous teasing that was left unexplained. The result of which leads to more questions than an episode of mind-bending series, Lost. Either way, WWE did some interesting stuff last night that will make people want to come back next Monday and find out what’s going on. Why did Mickie looked so annoyed? Why was Beth Phoenix glaring at her? Why was Beth smirking? Who was she smirking at? So many questions!

Well we could probably answer a few of those questions right now — or theorize rather. From last night’s WWE.com live chat, we have some explanation as to why Mickie looked pissed; she felt disrespected by Gail Kim blind tagging herself into the match. Also given the rumours just hours before Raw went on the air about talk of turning Gail heel, that plays into the direction they went in last night.

But then to speculate on the other questions, how does Beth factor in? It definitely seemed as though she was part of this situation too as she stood on the ring apron far longer than she should have and the camera panned in on her, after the match. We saw Beth glare at someone and then we saw her expression change to a smirk; if I had to speculate I guess she was glaring at Mickie and maybe smirking at Gail? Maybe the storyline is that Gail & Beth have teamed up to oust Mickie J? Intriguing…

Another possibility among you guys seems to be that it’ll be Mickie that turns heel. Personally, I don’t see it happening. If there were ever a Diva that was considered a ‘prized possession’ it would be Mickie, I don’t think they’d want to turn her heel.

Onto the match, it’s nice to see Beth back in the ring after a few weeks absence and a ridiculous message board fodder pregnancy rumour. We kick off with something of a dream match, with Gail and Beth starting things out. Gail with a headlock but Beth uses her strength to lift Gail off her feet and throw her down, but the cat-like G-Kim lands on her feet. This is a singles match I definitely want to see, there’s a lot of parallels here between Gail-Kong, that powerful strength versus the agile, high flying style. Gail with a few punches before mounting Beth in the corner, but once again more strength from Beth as she hoists Gail up and throws her overhead, but Gail attempts to hit a sunset flip for a pin but even more power from Beth, grabbing her by the neck and bringing her to her feet.

Gail manages to break free, with a tilt-a-whirl headscissors into the armbar, which she calls the Flying Dragon. Rosa like any good Number 2 [Austin Powers, anyone?] breaks up the move but gets a fist from Gail for her troubles. Meanwhile Beth grabs Gail and hoists her into the air for a powerslam, which landed awkwardly. It looked as though she changed her mind in mid-air, from landing front first to on her back and eventually landed on her side. Beth manages to subdue Gail and tag in Alicia Fox…

Foxy hits a nice backbreaker on Gail, I guess that move is fair game since Maryse is injured, and then begins smashing her head into the canvas. Alicia tags in Rosa ‘Should Come With a Warning’ Mendes, who hits an awful looking powerslam on Gail that could’ve landed her on her head and then hesitates before going for a cover. Okay, one move and her timing is already off? Thankfully she tags back out to A-Fox, who hits a snapmare on Gail but then we see what I think was my favourite part of the match, a very unique takedown by Gail using her legs. Alicia sold this really well.

Gail finally manages to get a hot tag to the new Divas Champ, Mickie James who fights off Alicia and even knocks Rosa off the apron. A brief staredown between Beth and Mickie, before going right back to work on Alicia with a kick to the gut and a neckbreaker. Mickie signals her Tornado DDT but Alicia backs her into the corner, which calls for Mickie’s headscissors with the assist from the corner & a Thesz press.

The end sees Alicia attempt to kick Mickie but Mickie grabs her leg and Gail blind tags herself in and hits a missile dropkick as Mickie watches on annoyed. Gail for the pin on Alicia as Kelly gets her only action of the night, with a clothesline on Rosa.

Mickie doesn’t look too happy but celebrates anyway, as Beth looks on with a Death Eater-like glare before smirking ever so slightly. Ominous.

Good match, good set-up for future storylines. Gail vs Mickie? Mickie vs Beth? Mickie vs Gail vs Beth? I’m down for 2 of those 3 options. Looking forward to next week.