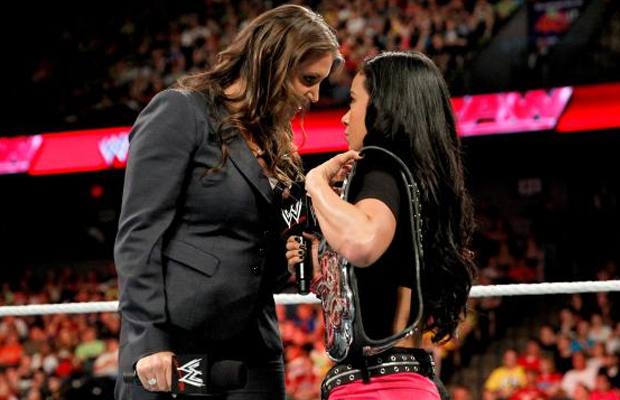 To say that Payback delivered in a big way would be a gross understatement. It was a nice full of twists, turns, upsets, and flat-out incredible action. Divas AJ Lee and Kaitlyn upped their games delivered the best match in recent history, telling a story full of a rollercoaster ride of emotions. The former best friends and tag team partners squared off in the most highly anticipated match of the current Diva era and lived up to the hype. The job both women did left a lasting impression on Diva fans and the WWE Universe as a whole, and personally, I couldn’t more proud to be a fan of both of them. After coming off the highest of highs, many of us wondered if Raw would be able to deliver. It’s fair to say that since we’re on the road to Summerslam, the ‘E’s second biggest event of the year, good things are likely to come our way. And for once, none of us were disappointed. The goddess herself, Stephanie McMahon, dazzled our screens last night in a segment with our newly crowned champ and jilted challenger. And Queen Vickie Guerrero more than made up for her terrible tweet on Sunday night that basically spoiled the outcome of Prince Dawlf’s match.

So what went down on Monday Night Raw?

Lets kick things off with Vickie Guerrero’s BEST SEGMENT EVER!

I know, I know. Pretty shameless on my part, but there was just so much Vickie stuff last night, that I had to narrow it down. It shouldn’t shock anyone that I picked BB Christian‘s return. Thank God, and not a moment too soon. I was so close to signing my divorce papers when it came to my marriage to WWE. The Prince Dawlf thing just didn’t work for me. But anyway, Queen Vickie and Brad Maddox brought back my first love, and I couldn’t be more happy.

It’s also nice to have Vickie back on television. She’s such a good character and they’ve really cooled her off in recent weeks. It kind of sucks in the sense that there’s so much you can do with the general manager’s role and Vickie has proven herself as a perfect fit for it. It’s also a change of character for her as well, and it’s interesting to see her not really being a heel. She’s always going to get that heat because of her catch phrase, but she’s acting as more of a tweener now. She’s being a professional, so to speak, and it’s definitely different. It also looks like she’s getting a mini-storyline now. With Triple H, Stephanie, and Vince McMahon all urging our favorite cougar to follow their lead, it’ll be interesting to see what happens in the upcoming weeks.

To be honest, I think Vickie should just tell them all to just buzz off. That’s what I would do, haha. And seriously, welcome back to my beloved BB Christian. It’s been way way way way way to long.

Raw was so solid last night and a very strong Divas segment just added to that. Newly crowned champ, AJ, decided to come to the ring and brag about her victory.

Okay, the fact that Stephanie and AJ had a segment together just kills me, in a good way. Stephanie is the goddess of all Divas, and she always will be. No one generated as much heat as she did back in the day (except maybe Vickie), and something tells me that a young AJ probably looked up to Stephanie just as much as did Lita and Trish Stratus to a certain extent. It probably meant everything to AJ to get an opportunity to share the stage with Stephanie so to speak, and it means everything to me that Stephanie is back on television every week. I’m not sure how long it’s going to last but I’m going to enjoy every single second of it. Stephanie brings all the intangibles to the table that so many other people can not. She knows how to work absolutely everything from her body to her face to her voice. I love her and to be honest, I always have.

I loved AJ in this segment as well. She’s so disgustingly full of herself it’s ridiculous. I love how she didn’t hold anything back and just went after Stephanie. AJ definitely isn’t afraid to throw shade at anymore, now is she? Stephanie, being Stephanie, threw it all right back at the champ. I love how she threatened AJ’s job and I love it even more that she couldn’t just let Kaitlyn get away with interrupting her. Everything worked.

Kaitlyn was fantastic. I loved the brawl between the two women and just like I thought, this feud is just getting started. This is making both Divas, and I couldn’t be more excited to see how far we go this summer with them. Much like Payback, I can’t say enough nice things about the work these two are doing, and kudos to Stephanie for giving them a nice little rub with her presence. There’s not a lot left for me to say right now. Kaitlyn and AJ were magnificant. I really hope we get something fantastic on SmackDown as well.