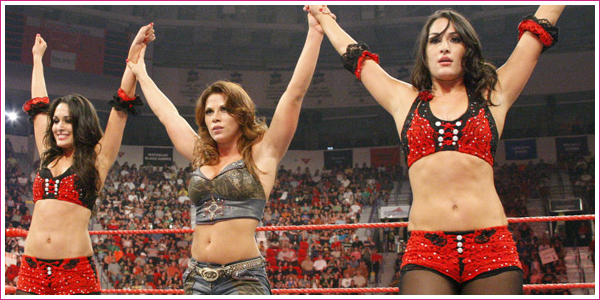 Last night’s much touted ‘commercial free’ Raw was a certifiable flop in the Divas department. If you missed it – and I’m kinda wishing I had – you didn’t miss anything at all. In fact, you could have just not watched last night’s Raw and continue living your life because there was nothing interesting about last night’s show that stands out. There was no storyline development other than ground we’ve already covered multiple times – “Maryse is scared of Mickie.” Yawn!

With a commercial free episode, the Divas were given a little more ring time than usual but they didn’t do anything too exciting with it. We got the standard fare tag team match, surprisingly with golden girl Kelly Kelly on the bench this week as Mickie James teamed with the Bella Twins. Meanwhile, Rosa – finally wearing pants – seems to have usurped Jillian‘s job forreal, as she jobs out to Mickie for the second week in a row.

The match itself wasn’t too bad technically but forgettable, bland and boring. This is the one week where I was actually hoping the match would end quickly, but go figure the one week you get a boring match they’d add on an extra minute or two.

We start with Mickie and Rosa, Mickie wants to show that she can hang with the new breed of model Divas by doing an ‘athletic cartwheel’ ala Eve and Kelly. Beth tags in & nothing too exciting here between these two. Mickie tags in one of the Bellas [seriously they need name tags] & Beth tags out to Rosa. The Bella hits a very nice hurricanrana which is sold well by Rosa but then follows it up with a flimsy arm drag. Bella hits a monkey flip from the corner & tags out to the other one, meanwhile Maryse distracts the referee while Beth does some weird ass move by driving the Bella into the turnbuckle. Why not just slam her?

Rosa tags out to the Divas Champion who hits her paint-by-numbers moveset; a few slaps, a backbreaker, a camel clutch before tagging out to Rosa, who’s getting a real workout in this match despite the more experienced Maryse & Beth being her partners – what’s up with that? Rosa bores me… she hits a few blah moves, Bella leaps for a hot tag to Mickie and finally the end is here!

Former Women’s Champion, Beth Phoenix gets laid out by a double dropkick by the Bella Twins. How the mighty have fallen. Meanwhile Mickie hits a very powerful superkick on Rosa for the win, a nice change from the Tornado DDT.

We end with more Mickie and Maryse teasing, which we’ve only seen a dozen times before. I need a nap…

And new to our Redux posts, a reader poll!